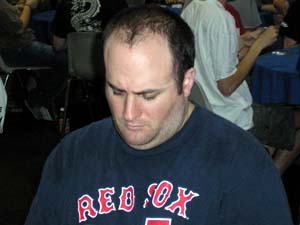 Wise sighed as he looked at the cards laid out in front of him that he would use to build his deck, "I know I did something wrong in that draft. That is the problem with not playing as much. In the past I would make mistakes but I would see them. Now I have no idea what went wrong. I guess it was my first pick--maybe I should have taken Looming Hoverguard."

Gary has reached a point in his life where he does not feel he can dedicate as much time, money, and energy into Magic as he has in the past and is ready to move on to another chapter of his life. He is putting the professional Magic career behind him and preparing to move on to other pursuits--could a book be in Gary's future? He will continue to play as long as he is qualified--likely through Worlds this year--and collect whatever end of the year payout he may have earned along the way. In the meantime he is going to hope to string together a couple of strong finishes to cap his career and say his farewells to the community that he has embraced for the past ten years of his life.

As the table settled in to draft Gary found himself with a 3-0 record and surrounded by a formidable table of drafters with the same result from the first draft of the weekend. Also at the table with him were two fellow Invitationalists--Osyp Lebedowicz and Jens Thoren, plus Anton Jonsson, Sol Malka, David Brucker, Shin'ichi Mayuzum, and John Mahon. Thoren was to his left and Brucker to his right.

There were only two cards in Gary's opening pack that merited first pick status. In addition to the Looming Hoverguard there was a Skeleton Shard. Gary flicked back and forth between the two cards trying to make a decision. It was only when the head judge compelled all the players to make their pick that he finally settled on the Skeleton Shard. He was looking to go red-black with an eye toward the array of modular creatures in the final pack.

The pack that was passed to him yielded a Goblin Replica and the next pack featured an Agog that he took over Deconstruct, Leaden Mir, and Nil Replica. His next two picks were manna fixers and manna accelerants--Talisman of Impulse and Chromatic Sphere--the latter over a Goblin War Wagon. The seventh pack offered him a choice between a Nim Lasher and a Nil Shrieker and he chose the flier. The eighth pick of the draft gave him a Frogmite.

There was nothing of note in the remaining packs other than a couple of rares and a pair of Cloudposts. The card selection was unspectacular and there was little that Gary passed that could be considered controversial. The Looming Hoverguard and the Deconstruct had put Jens Thoren on Gary's left into blue-green and he should have been in a good position for black in the second set of packs.

The pack he opened going the other way was much deeper than his fist pack overall. In addition to Mir Enforcer and Bonesplitter it contained Thirst for Knowledge, Skyhunter Patrol, and a few other staple commons. Gary wavered between the affinity guy and the equipment and chose the Splitter. The next pack was a no-brainer with Shatter quickly going onto his pile of picks over Serum Tank and Iron Myr.

In the third pack he was offered a selection of Hematite Golem, Clockwork Vorrac, and Pewter Golem but forsook them all for an Irradiate. To his left Jens was choosing between an Altar of Shadows and a Terror. He took the artifact and Gary had another removal spell coming his way. He wanted to take a Rustmouth Ogre over it but could not quite bring himself to do it.

He picked up nothing else of note besides a second Irradiate and Needlebug with his seventh and eighth picks. His next to last pick of the second set of packs offered him his third Cloudpost and he took it happily in case there was something large awaiting him in Darksteel. Gary was positioned excellently for the third pack. To his right Brucker was not in black although Anton Jonsson was one seat away. After that there were no other black drafters clear around the table. Both he and Anton should have had plenty of black to choose from.

The first Darksteel pack offered him his choice of removal spells and he took Barbed Lightning over Echoing Decay. There was an Echoing Decay awaiting him in the second pack that looked remarkably similar to his first pack. Packs three and four offered Gary Grimclaw Bats. He seemed perturbed by the second one and wanted to take an Arcbound Bruiser over it--he had nothing beside the Goblin Replica that he could exploit with his Shard--but ultimately took the second Bats.

Every Darksteel pack seemed to have plenty of Tel-Jilad Wolves and Outriders but modular men seemed to be in short supply. Gary threw up his hands in defeat when the sixth pack came and had Arcbound Worker, Stinger and Hybrid. He took the Stinger and shook his head that they couldn't be spread out over a couple of packs. He finished up his first look at the eight packs with a Darksteel Citadel and an Ingot. The remainder of the packs had nothing but Drooling Ogres for his sideboard.

Afterward while building his deck he found himself short of creatures. He fanned out three Drooling Ogres and laughed, "I could just run these and hope. Or I could hold back artifacts and play them like I would play Death Match."

He threw a Dross Prowler into his three slot to pad out his creature count and could not believe he was going to have to resort to such measures, "I have never main decked this guy before but," and he held up the other card he was considering--Darksteel Pendant, "I believe this card has been accurately described as a mulligan."

Gary was pretty hard on himself about his draft but there did not seem to be much he could have done differently once he took the Shard over Looming Hoverguard. He had an opportunity to pick up a Pewter Golem over his first Irradiate and that could be the only real mistake of the draft but Gary was still trying to draft an aggressive black-red artifact deck with Lashers and Shriekers. "I should have realized that it was not going as planned when none of the artifact lands came to me. I was still clinging to that deck up until the third pack but there were no Arcbound guys until that one pack had three!"

Gary was at a tough table with a middle of the road deck. The card pool did not look terribly impressive and I don't know if anyone at the table has a very exciting deck. My prediction is that Gary will go 1-2 with this deck with an outside shot at 2-1 if things break right for him in the form of early Bats backed up by his decent pool of removal cards.