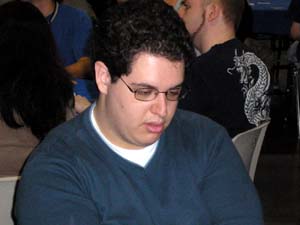 is Mike Turian's swan song. After a long career with plenty of impressive finishes on the Pro Tour and Grand Prix circuits, he's "hanging up the wand". This is not to say that success is all that defines him, as Turian's significance on the tour has been relevant far beyond just his finishes. In fact, he was a member of the old and new CMU teams, from the old group featuring Randy Buehler and Erik Lauer to the CMU/TOGIT conglomerate that included Osyp Lebedowicz and Eugene Harvey. With that kind of history and a resume of money finishes Turian has nothing to prove. Still, he'd certainly like to finish on a high note this weekend.

Turian's first pack wasn't too impressive. He took Fireshrieker, passing Vulshok Berserker, Relic Bane, Tel-Jilad Chosen and Consume Strength. He stayed away from committing to a color with his second pick, taking Clockwork Condor over Leonin Scimitar and another Chosen. Pick three saw him make a decision, taking Leonin Skyhunter over Viridian Longbow. He went deeper into white afterwards, taking Leonin Den-Guard, followed by Roar of the Kha. Altar's Light was picked over Soldier Replica, and Auriok Transfixer over Scythe of the Wretched. White was obviously underdrafted at this point, as Pearl Shard came around as a late gift.

Turian first picked Skyhunter Cub in the second pack, and committed to a second color by taking a pair of Vulshok Berserkers. He drafted Skyhunter Patrol over Mirror Golem, and plenty of white cards came around late- Transfixer, Gold Myr, Soldier Replica and Leonin Elder. Nothing to get terribly excited about, but you can do far worse when the packs are winding down, and it shows that not many people at the table are drafting your color. In Darksteel Turian first picked Barbed Lightning, followed by Razor Golem, and Emissary of Hope along with a sixth pick Test of Faith rewarded him for playing the underdrafted color.

Turian: My deck is pretty good, it's just a solid white-red deck. Early on, I took Fireshrieker out of the mediocre pack…

TW: It wasn't that mediocre, was it? It wasn't great, but…

Turian: Well, there were a bunch of good cards in the pack, but there was no Grab the Reigns, no Icy Manipulator, you know what I mean? Sometimes you just open up a card that defines your draft. Here, I had all these cards to choose from, and I got to define my draft for myself. With Fireshrieker, I decided that I was pretty much going to go white. And, it worked out well with the third pick Leonin Skyhunter

TW: That's interesting, because from my perspective it seemed that your strategy was to take artifacts, and then figure out your colors. But, you were thinking white the whole time.

Turian: Well, the nice thing about taking equipment first is that it can fit into any deck. It doesn't force you into white, but it meant that if I saw some white coming down, then I'd just take it and go white from there. The second pack was pretty bad, but that's why I took the Condor. In white you usually get a lot of equipment, and the Condor is pretty good with them. However, I didn't end up with that much equipment.

TW: Yeah, I was wondering a little about the Condor over the Scimitar.

Turian: I'm not going to take the Scimitar second. Later on I had a chance for a Scimitar, and even though my deck was kind of a deck that wanted one, it's so weak that it wasn't worthwhile.

TW: Why did you take the Skyhunter over the Longbow?

Turian: I just think it's a better card. And, if I pass it, there's a good chance that the guy to my left takes it, and then I'm just screwed for the second pack. Also, getting Test of Faith that late? That's retarded!

TW: Was that part of the strategy, that you came in thinking white would be underdrafted, and you'll get things like a late Test of Faith?

Turian: Yeah, that's why it's nice to force colors. I don't know if it worked or not since I didn't see a lot of white in the second pack, so someone two or three people over may have drafted white. But, I saw that white was coming and that's why I went with it. So, the Test of Faith alone makes it worthwhile. It's a first pick card that I got late.

TW: And these guys (Vulshok Berserkers). You really like them?

Turian: They're really good. We were talking about how if you cast them on turn four, you never lose those games. I don't know why, but that's the way they work.

TW: And the Transfixer over Scythe of the Wretched?

Turian: I like the one drop, I like the Transfixer. As the deck turned out the Scythe would have been decent, but it's so much to equip.