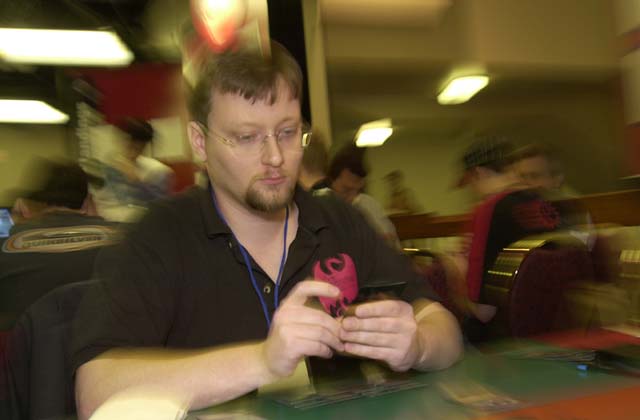 Read Rob Dougherty's Magic resume, and you'll learn that he's the owner of Your Move Games, Co-Champion of Team Pro Tour - DC, and a PT veteran with two individual PT Top 8s. But to meet Rob in person is to know one of the wittiest men in Magic and a man who loves his fatties. Rob's playful personality and beatdown draft style was captured in one small moment he and I shared after draft 1. As I walked by his deck-building table, he silently acknowledged me by fanning his collection of green/red beats for inspection. Without saying a word, he picked up a Jade Leech, windmilled it down onto the table in a tapped position with a wicked grin. Having practiced with Rob many times, I knew that this was his way of saying "5/5 Jade Leech . . . TURN . . . IT . . . SIDE . . . WAYS!" Rob's favorite practice drafts were always those that featured fast, aggressive green beats, and his drafts today in LA have been no exception.

Dougherty swept his first draft table with a green/red deck featuring 7 Kavu and a Kavu Monarch, 4 Elves and an Elvish Champion, Jade Leech, and Molimo Maro Sorcerer. After round 3, I asked him about his draft strategies and the secret to going 3-0 with an archetype shunned by many other pros. "I actually don't try to force green," he said. "I try to draft positionally, draft whatever the person in front of me isn't taking. I worked very hard to develop the skills with a wide variety of archetypes so I could fit my colors to the table. At first I was very unskilled with green, so I practiced. And in the process, it became my favorite." Rob says that the key to a successful green/red deck is in the tempo. "Pay attention to your curve," he advises. "I'll take a Serpentine Kavu over a Scorching Lava if I've already got burn and I'm missing 5-drops." It also helps, he told me with a laugh, "if you can talk to cute reporter chicks." While this reporter can neither confirm nor deny the verity of this theory, I do know that Dougherty was is good position heading into his second draft.

Draft 2 turned out to be much more difficult for Dougherty than his first. As the seat 8 player, his first two picks were a rather unspectacular bounce of Crimson Acolyte and Traveler's Cloak. The next pack yielded only the marginal Scavenged Weaponry. Dougherty's first shot at a more playable card was a Phyrexian Reaper, but his draft then picked up speed with Trench Wurm, followed by Explosive Growth and Rooting Kavu. An Agonizing Demise and a Phyrexian Delver rounded out the first set of boosters, establishing Dougherty in green/black. Normally green and black would be a solid color base for Dougherty, and I would expect him to look for red to bridge the two. However, both Jamie Parke to Dougherty's right and Johan Sadeghpour to his left were drafting red/black, cutting off two of Dougherty's three colors from both directions.

The second round of boosters started out strong with Dougherty cracking a Breath of Darigaaz, but was otherwise unspectacular. Although Rob got solid picks like Shivan Zombie, Zap, and three Kavu Aggressors, he suffered greatly from Sadeghpour taking red/black in front of him. Sadeghpour was passed a remarkable run of 6th pick Pouncing Kavu, 5th pick Plague Spores, 4th pick Vicious Kavu, 3rd pick Void, and 2nd pick Plague Spores, all of which were scooped up one seat before making it to Dougherty.

Dougherty may have been hoping for some bombs in the final set of boosters, but the packs were not forthcoming. He picked up an Exotic Curse to supplement his removal, a Kavu Climber, Verduran Emissary, and Kavu Chameleon for his creature base, and an Aggressive Urge to add to his combat tricks, but nothing truly amazing. Dougherty's deck is good, but is not on as good as his first or as some of the other decks at his table. He can probably expect to finish 2-2 in this draft, or with luck, have a winning record.