The Pro Tour's most notorious bad boy, Ryan Fuller, was already guaranteed $6,500 when he sat down for the final draft of the Masters Series. He was feeding Johan Sadeghpour and being fed by Mike Pustilnik. 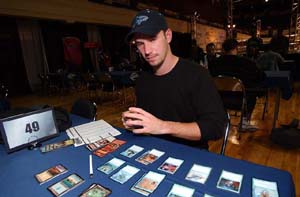 Fuller's first pack had a Call of the Herd in it and he very quickly decided he was going to draft that card. He then spent the rest of his drafting time studying anmemorizing the rest of the pack. Pick #2 was a toughy - Diligent Farmhand, Flameburst, or Aven Fisher? Fuller debated the whole time and finally decided to go with the green card since he knew he was in that color. Pack #3 was decision time as Pustilnik passed him a Deluge and a Dwarven Strike Force. Red or Blue, which would it be? Fuller went with the strike force and then took Thermal Blast from the next pack.

Pack #5 brought with it a big surprise: Cephalid Looter was still available for drafting. Fuller drafted green-blue yesterday and claimed after going 2-0 "I have never lost with Cephalid Looter on the table." Fuller couldn't pass up his favorite card when it was passed to him 5th, so he took it. Then he took a Syncopate. The rest of the pack gave him Fervent Denial, Phantom Whelp, and Moment's Peace.

Going into pack 2 Fuller appeared to be green-blue with a Dwarven Task Force that could have been a Deluge. He first picked a Sylvan Might from the second set fo packs, passing on Werebear and Firebolt. His next pick was Balshan Grifin over Krosan Archer and that pretty much committed him to blue. Pick 3 was Aven Fisher over Diligent Farmhand and Refresh. A 5th pick Muscle Burst was nice and Krosan Avenger 7th plus Psionic Gift 8th was decent, but all in all Fuller's deck wasn't shaping up that amazingly. He had a bunch of blue cards that could fill up his graveyard, but nothing exciting to do once he got to threshold.

Fuller's real problem was that Pustilnik was feeding him and had gone green right from the get-go. The two underdrafted colors on his right were indeed red and blue - the colors he identified as good colors to switch into in the first pack - but he just couldn't bring himself to give up on green. Fuller first picked a Springing Tiger from the third set of packs (passing on Krosan Beast and Firebolt). He then got a Cephalid Looter and got paid off even more for switching into blue by getting a 6th pick Balshan Griffin. What he did not draft was a steady stream of Barbarian Lunatics, Acceptable Losses, and Ember Beasts. Instead he had to settle for Seafloor Debris, D-drafts of Shelter, and a Chatter of the Squirrel. In the end I think he'll probably have to splash red to keep his card quality high enough to compete. Had he opened something other than Call of the Herd, his draft probably would have worked out much beer. As it is, his quarterfinals opponent - Bob Maher - has an amazing white deck and Fuller is expected to make an early exit.