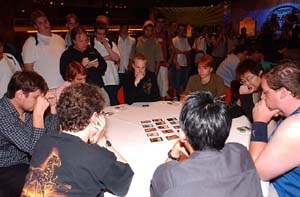 I'm not sure I know how to write this article without cursing ...

I watched table 1 for the final draft of the Rochester day. The first interesting thing I noticed about the table is that not a single American was sitting at it. The same thing had been true before the first draft, but all the Americans I talked to said that was just because the standings from the Standard constructed day were used to seed the pods. "Just wait for the second draft," they said. Well, after three rounds of draft, Finnish national team member Tuomo Niemenin was on top of the standings with a perfect 9-0 record. He was joined by a pair of German players, as Peer Kroger and Daniel Zink defended their home turf by posting perfect 3-0 records at their previous draft tables. Jeroen Remie (Netherlands), Sylvain Laurial (France), and Tuomas Kotiranta (Finland) brought the total of European drafters at the table up to 6. Rounding out the table were Jin Okamoto (Japan) and Han Yuen Soh (Malaysia).

Pack #1 was a saucy one: Silent Specter, Cruel Revival, Lavamancer's Skill, Wirewood Savage, Catapult Squad, and Daru Lancer gave lots of opportunities for everyone to signal their intentions. Niemenen got to make the first choice and he made a bold one: Catapult Squad! Declining the chance to take one of the two great black cards, Niemenen instead announced loudly that he wanted to force a soldier deck. I think he was thinking that he could scare his neighbors out of white and then get passed Daru Stingers in Legions. I'm not sure it was worth sacrificing so much card quality to get into that position, but the good news is that the next pick out of the pack went to his fellow countryman Tuomas Kotiranta. Niemenen may even have known something about Kotiranta's draft preferences and so he may have been willing to pass on black in part because he knew he was giving a friend the hook-up.

Niemenen took Silent Specter and then Daniel Zink was forced to decide whether to take the best card left (Cruel Revival) and fight for black, or to sacrifice a bit of card quality in order to position himself for U-R (by drafting the Skill) or green (by drafting the Savage). He shocked me by drafting Daru Lancer and deciding to fight Niemenen for white! Jin Okamoto then happily took fourth pick Cruel Revival and Jeroen Remie had to be delighted to take a fifth pick Lavamancer's Skill when no one had yet dipped a toe into either red or blue. Han Yuen Soh then took Wirewood Savage and he was the table's only green mage for quite a while.

There wasn't a whole lot left in pack one, but that never stops anyone from signaling in Rochester draft. Peer Kroger took Prowling Pangolin and then Sylvain Lauriol took both of the blue cards from the pack (Riptide Biologist and Nameless One). Kroger then took Haunted Cadaver and seemed to have positioned himself nicely to be the third black mage at the table, with the three of them spread out maximally in seats 2, 4, and 7.

My first thought when Kotiranta busted open pack #2 of the draft was "Holy black rares, Batman!" Having just been passed Silent Specter, Kotiranta then got to first pick Visara. I was then half-expecting Zink to draft Daunting Defender since he had valued Daru Lancer so high in the first pack, but he went with Solar Blast instead. Okamoto then solidified himself in black with a Severed Legion, Remie took the potentially Skillful Sage Aven, and Soh had to love pairing his 6th pick Wirewood Savage with a 5th pick Barkhide Mauler.

Kroger wisely took the only playable black card (a Cabal Archon) and then Lauriol showed everyone why drafting in the one seat in so terrible. After Niemenen had sacrificed his first pick just to declare to the world "I WANT WHITE," Lauriol savaged him by drafting Daunting Defender and going on to fight him for white. There's really not a whole lot you can do with the first seat in a Rochester draft other than hope the 8-seat doesn't want to mess with you. If the 8 seat does want to fight you, he just can ... and Lauriol did. I was especially surprised that Lauriol chose to be so cruel since his first pack picks had positioned him quite reasonably to be a blue mage, and there was only one (other) blue mage at the table so far. There was a Lonely Sandbar still available in the pack, but Lauriol passed on his opportunity to draft it in favor of that Daunting Defender. Niemenen seemed shocked, and wound up drafting that Sandbar along with an Invigorating Boon before Lauriol took Goblin Taskmaster 10th.

The fighting escalated in pack 3. Zink's first pick was easy – he already had a Solar Blast and there was Agent Sparksmith staring back at him. Okamoto was just black so far, but he apparently did not want to draft Crown of Suspicion that highly so he took a Dive Bomber and entered the battle royale for the white cards. So after just two and a half packs, a preference to draft white cards had now been signaled by seats 8, 1, 3, and 4. Remie calmly took Thoughtbound Primoc – perfect for his budding blue-red deck – and then one pick later it was time for more dream-wrecking. Soh didn't have any green cards in the pack to take, so he decided instead to ruin Kroger's day by drafting the Crown of Suspicion and fighting Kroger for black. Kroger's jaw dropped visibly as he parsed that pick – instead of being one of three black mages with a two-person buffer on either side of him, Kroger was one of four black mages and the person feeding him two-thirds of the time was among his competition for them. He took Cabal Executioner out of reflex and spent the rest of the pack just shaking his head. Lauriol then took Glory Seeker and confirmed Niemenen's worst fears – yes, Lauriol really was moving in on Niemenen's white territory. Niemenen started to make the best of a bad situation by drafting Riptide Entrancer and Lonely Sandbar. He had to be curious why Lauriol didn't want those cards, but as one of only two blue mages maybe Niemenen could make a go of it despite fighting for white. Things got potentially even more curious on the wheel when Kotiranta, with Zink solidly red on his left, took Charging Slateback.

Okamoto's first pick from pack 4 was easy: Gluttonous Zombie. Remie's pick was even easier as his blue-red deck got handed a second Lavamancer's Skill. Soh took Treespring Lorian and then Kroger, who was looking for a second color to pair with his black, took Ascending Aven. Lauriol took Skirk Commando and with both his neighbors considering blue he never varied from his path to red-white. Niemenen seemed resolved to fight for white and took Gravel Slinger and Kotiranta then made Daniel Zink a very sad man by drafting a Threaten that Zink was already mentally fitting into his own mana curve. Zink's response was to hate draft both of the playable black cards from the pack and sacrifice his own picks to deny Kotiranta a card from his main color.

Pack #5 confirmed Kroger's worst fears. After Remie took Erratic Explosion first, Soh took Cruel Revival and for the rest of the draft Soh picked off the choicest black removal spells from each pack before Kroger got a shot at them. Kroger decided to take Aurification third and suddenly there was a 5th potential white mage out of a six seat line. Lauriol dug in his heels with fourth pick Daru Lancer and Niemenen was left with just a Vitality Charm and the possibility of drafting green.

Soh first picked a Krosan Tusker from his own pack and Kroger took Festering Goblin. Lauriol took Pinpoint Avalanche and Niemenen continued his scamble to get into an underdrafted color by taking Ascending Aven. Kotiranta settled in to his fight with Zink over red by drafting Searing Flesh and Zink set his jaw and took Forgotten Cave. Okamoto then got a Daru Healer and Remie drafted Embermage Goblin plus Mage's Guile.

Kroger's questions got answered in pack #7. He cracked open Akroma's Vengeance so now he was stuck fighting for white and black come hell or high water. Zink never took a relevant white card after his pack 1, pick 3 Daru Lancer so Kroger wound up fighting 3 other players for white along with 3 other players for black. That's obviously a pretty mediocre position, but I'm not sure there was anything else he could do. After Lauriol took Solar Blast from that pack, Niemenen took Mistform Dreamer and it was now obvious to everyone that he would be the table's other blue mage. With Kroger giving up on his one Ascending Aven, no one else ever threatened to fight Niemenen and Remie for blue so they got to divide up between just the two of them (in seats 1 and 5). 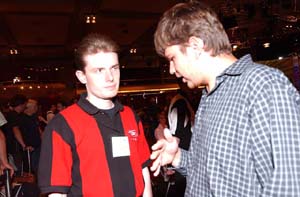 Sylvain Lauriol chats with Head Judge Rune HorvikWhen Kroger's pack got to Zink, four cards had already been drafted from it (including Kotiranta's third pick Wretched Anurid) and Wirewood Savage was still there. As of this point (halfway through pack 7), the table still had just one green mage and Zink made a fairly obvious but very wise audible – he decided to be the table's other green mage. From that point on he drafted a red-green deck with several cards that rewarded him for playing lots of beasts. In addition to that Savage he picked up multiple Skirk Outriders in Legions.

Lauriol may not have played politics very well, but he played the pack opening aspect of Rochester draft very nicely. In pack #8 he got to first pick Rorix Bladewing and then in pack #9 he got to first pick Akroma. That last Onslaught pack also had a Cruel Revival in it, but Niemenen had long since passed the point of no return and he continued to hook up his fellow Finn by passing the Revival to him third while Niemenen settled for a Piety Charm.

By this point in the draft everyone had pretty much established and defended their color choices. Normally, the optimal number of players drafting a color is 3. With eight players and playing two colors each, that's 16 colors, which works out nicely as 3 drafters per color plus a fourth drafting one of the colors. In this draft, however, not one color was being drafted by three players. Instead; black, red, and white were being drafted by four players each whereas blue and green were each being drafted by just two.

Bizarrely, by the end of the festivities, no one seemed to have much an advantage over anyone else. Some players had drafted well while others had gotten lucky. Some players had positioned themselves well, but several of them got wrecked by having their neighbors decide to fight them anyway. Some players got deep decks by shifting into underdrafted colors, but others got amazing bombs that will be hard to beat if they draw them. All in all, I think it's anyone's table to win. It was quite an interesting draft to watch and it could have gone a lot of different. I doubt anyone would have predicted ahead of time that it would go precisely the way it went, but that doesn't change the fact that the three rounds these players play with these decks will go a long way toward determining which of them advance to Sunday's Top 8.