This draft saw most of the table in close cooperation, and two players in fiery competition. The seating was as follows:

It took the table several Invasion packs to settle down, due to irregularly high concentrations of quality in one color at a time. In the first pack, Brian Selden wisely took a Probe, and let the next seven players fight over five quality green cards (Harrow, Nomadic Elf, Sulam Djinn, Simoon, and Aggressive Urge). That first pick turned out to be the critical start to a very quiet draft for Brian. 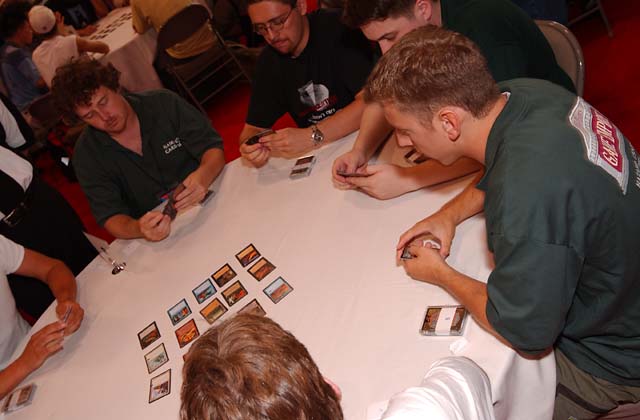 In the second pack, red was the color to chase. Trey first-picked a Keldon Necropolis, while Tribal Flames (Tommi), Maniacal Rage (Alan), Firescreamer (Kai), and Slimy Kavu (also to Kai) all went as playable picks.

In the third pack, the focus shifted to blue: Wessel picked Tower Drake, then Tommi Crosis, and Markus Recoil. This pick of Markus's set a tone with Tommi that defined their relationship throughout the draft.

By the end of Invasion, Brian had solidified his blue-black deck with Tidal Visionary, Rainbow Crow, and Ravenous Rats, and the threat of white and/or red splash with Glimmering Angel and Shivan Emissary. Trey was in red-green, with dabbling in black for two Plague Spores and a Soul Burn. Wessel was solid blue-white, enjoying a fifth-pick Atalya, Samite Master and good Benalish defenders like the Lancer and Trapper.

Alan seemed to mirror Trey in r-g-b, and even matched the Dane's bomb (the Necropolis) with one of his own (Tsabo's Assassin) . . . but with Harrow and Nomadic Elf to boot, Alan was prepared to go four- or five-color if necessary.

Kai was already there, with picks ranging from Ruham Djinn and Thornscape Apprentice to Agonizing Demise and Firescreamer. Harrow and Quirion Sentinel served as fixers.

Andrew, like Wessel, was neck-deep in blue-white picks like Faerie Squadron, Benalish Trapper, and Repulse. The only hint of his future thoughts was the sole Scorching Lava he took third pack, which could just as easily be interpreted as a hate draft against Kai.

In Planeshift, the rivalry between Wessel and Tommi became intense, though neither player lost his cool. As Markus took Bog Down, Wessel took Slay. As Markus took Nightscape Battlemage, Wessel took Crosis's Charm. As Markus took Cavern Harpy, Tommi took Hunting Drake. And as Markus took Rushing River, Tommi took Slingshot Goblin. Even when divided by the cool piece of plastic that helps everyone remember where the bounce is, they remained firm: Tommi first-picked the next Nightscape Battlemage, while Markus had to make do with a bounce of Sisay's Ingenuity and Sleeping Potion. Then, with consecutive picks again, Markus took a Slingshot Goblin while Tommi bounced a Stormscape Familiar and Dromar's Cavern.

And wait, it wasn't over! In the seventh pack, Markus took Volcanic Imp before Tommi's Confound; and then in the last pack, when someone must have wanted to shout, "Can't we all just get along?" Markus swiped a Nightscape Familiar before Tommi took a Bog Down (yes, the same Planeshift card that started this whole mess).

Meanwhile, everyone else was running fairly smoothly. Brian also benefited from a Nightscape Battlemage (that made three through Planeshift . . . there were also three Shifting Skies, but that detail seems less impressive in retrospect), as well as a Cavern Harpy - Hunting Drake combo to go with his Tidal Visionary. Trey entered green-red heaven with access to cards like Thornscape Battlemage, Thornscape Familiar, Alpha Kavu, Horned Kavu, Sparkcaster, and Flametongue Kavu. Wessel continued to solidify his hold on blue-white, picking up Samite Elder and the (presumably younger) Samite Pilgrim, as well as flyers like Silver Drake and Aurora Griffin. Both he and his counterpart across the table openly showed a willingness to splash red . . . each of them gladly took a first-pick Magma Burst.

Alan continued to find quality picks despite the squabble to his right, including two Mire Kavu and Terminate. He also found some good green, including Quirion Dryad and Magnigoth Treefolk. The other green-x mage at the table, Kai, found two Stone Kavus, a Magma Burst of his own, Lashknife Barrier, and Mirrorwood Treefolk.

In Apocalypse, both Tommi and Markus seemed to drift a bit, perhaps both realizing that their decks were getting profoundly hurt. While other players were able to easily pick up enhancements (Planar Despair to Brian, AEther Mutation and two Savage Gorillas to Kai, Illuminate to Andrew, and Spectral Lynx to Wessel), it's hard to see what Tommi either player will do with the Jungle Barriers they picked up. (After Markus picked one, Tommi took a moment in a later pack to hate-draft a the second one away . . . which inspired Markus to take the Temporal Spring immediately after. This reporter wondered just how many colors they were going to fight over.)

Alan made some interesting choices in the last expansion. While a fifth-pick Desolation Angel for him was not at all astonishing (he will already have enough black to run Tsabo's Assassin, and has Harrow, Fertile Ground, Quirion Sentinel, Nomadic Elf to help him with the white), second- and fourth-pick Bloodfire Infusions were a bit surprising. He passed up the always reliable Dodecapod, Phyrexian Rager, and Dead Ringers to acquire these New-Age Ruptures; so he may have been worried about his removal capacity beyond the Assassin.