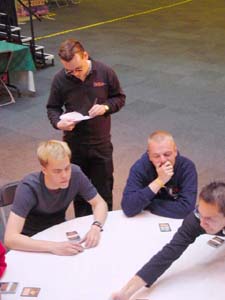 After day one Pierre Malherbaud stands alone at the top of the rankings. Behind him 16 players are tied on a 6-1 record. While the first pod contains the experienced French player the second is perhaps more interesting:

Herzog won the European Championships back in '99 and then went on to make the top 8 at World Championships in the same. His loss in the quarters back then was to another player at this table, the experienced Italian Raffaele Lo Moro. Österberg, Courtois and Summersberger are all experienced player and Hovi will always hold a place in history as the first player to ever win two Pro Tours.

Herzog was stuck in the awkward seat 8. Like seat 1 it can take a player a while to determine which colors they are. Fortunately a weak opening booster that saw Österberg taking a Polluted Delta third pick allowed Herzog to set out his stall as green-red with a wheel of Symbiotic Elf and Crown of Fury. Hovi, passing to him, set himself up as the white drafter and it looked like they'd cooperate.

Booster three caused the first waves as Österberg busted Silvos. In front of him Thille had taken an Undorak second pick out of the first booster but had then taken Ascending Aven. Österberg hadn't really picked up anything from the first couple of boosters and decided to run with the bomb. Behind him Lo Moro adjusted, switching out of green and into black by taking a first pick Cruel Revival.

A similar situation occurred later in the Onslaught run when Hovi opened his booster and a Rorix stared right back at him. At this point Hovi was mainly mono-white and could take the dragon for his second color. However both Herzog and Kapalas on either side were also in red. If he took Rorix it was unlikely he'd pick much other red up. He made the call, took a Gustcloak Harrier and shipped the dragon to a grateful Herzog. Herzog had an interesting choice between Lightning Rift and Shock in his pack. He took the Shock, wanting to play on the safe side. As it was he picked up a couple of landcyclers in Scourge and he would have preferred the Rift, but at the time he didn't know what he might get in Scourge and wanted the safer, guaranteed removal spell for the deck Shock. As it was the Rift went dead as Thille picked it.

After the first booster Thille looked to be in trouble as he hadn't settled on any colors. Lo Moro was red base and hoping to go into blue. Kapalas had shifted into green with a Hystrodon but his second color was divided between red and green. Courtois was running black-white, the same as Summersberger on the other side of the table. Österberg was green with Silvos. Hovi and Herzog looked in best shape. Herzog had picked up a lot of good wheels in Onslaught and Hovi's soldier deck had a nice curve. 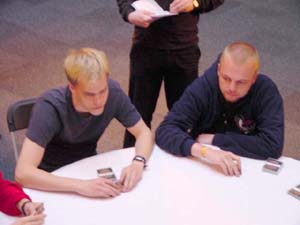 Legions provided more good wheels for Herzog as he picked up a couple of Enormous Baloths really late and then got really good breaks in the last couple of packs as both Thille and Courtois passed Canopy Crawler. Thille started moving into white-blue while Courtois, who was far heavier in black anyway, dropped white and moved into blue. Österberg picked black early for his second color and took a few Smokespew Invokers. This set up an interesting situation when Lo Moro opened Bane of the Living. He had looked as though he'd wanted to go into black with a first pick revival, but with Österberg now picking black so strongly he'd be unable to gain access to any of the goodies in Scourge so again a powerful rare got shipped. Thille's decision to stick on white was rewarded as his own pack gifted him an Akroma. Hovi quietly assembled his army of soldiers, finally finding some solid support in blue with an Echo Tracer and some fliers.

Scourge was again noticeably quiet. Hovi netted a Dawn Elemental, found some removal in Frozen Solid and also picked up some useful Frontline Strategists. His deck looks dangerous – quick and with numerous evasion creatures. Green and red aren't so powerful in Scourge but Herzog still got to round his deck out with some removal in the form of Scattershot and a couple of landcyclers to guarantee he'll find the land to crank out his many fat beasts. Herzog could have hated a Call to the Grave in the last pack, but he took a Chartooth Cougar over it instead.

The table eventually ended up: