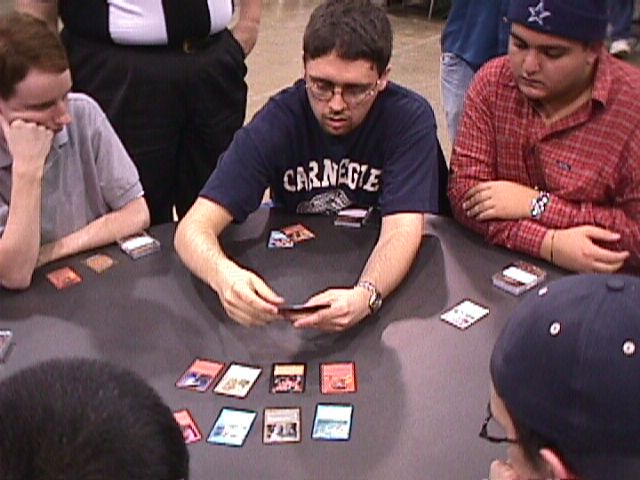 In the second draft at the top table at GP Atlanta, teammates and roommates Andrew Johnson and Eugene Harvey found themselves seated next to each other. This gave Johnson quite an opportunity since Harvey is undefeated so far in the tournament. Eugene probably only needs one draw to get into the top 8. Andrew at 8-1-1 might need as many as two wins. The result was a fine display of team drafting that left both players with most likely the best two decks at the table.

It started in the first pack. Harvey second picked a Barbarian Lunatic so that Johnson could get the much stronger Cephalid Looter. The next two packs went well for Johnson as he got a Thought Eater and a pro green Treetop Sentinel. The real hookups came when the two players got to the wheel. Both of them were able to get solid picks with Johnson picking up an Aven Fisher, Auramancer, Scrivener, Psionic Gift, and Embolden while Harvey picked up a Crypt Creeper, Blazing Salvo, and a Dusk Imp.

Interestingly, the table seemed to respond to the two players cooperative solidarity. There seemed to be no major blue drafter other than Johnson in the first pack. Harvey helped Johnson pick up a fifth pick Puppeteer followed by a fourth pick Persuasion. Both cards usually are first picks in blue.

The second pack, Johnson passed to Harvey. Harvey was first rewarded with a late Bomb Squad. The real hookup in the second pack came when Johnson opened a Cabal Patriarch and passed it to Harvey. The extra pass also gave Harvey some great removal in this pack including a Morbid Hunger, Thermal Blast, and a Flame Burst. Johson meanwhile picked up late a Mystic Zealot, Syncopate, and his second Puppeteer.

The third pack continued to solidify the two decks. Johnson was passed a Cephalid Broker, opened a Thought Devourer, wheeled an Aether Burst, and finished out his deck with a Patrol Hound, Embolden and Graceful Antelope. Harvey got some impressive creatures including a Dwarven Strike Force, a first pick Mortivore, and a pair of Gravediggers.