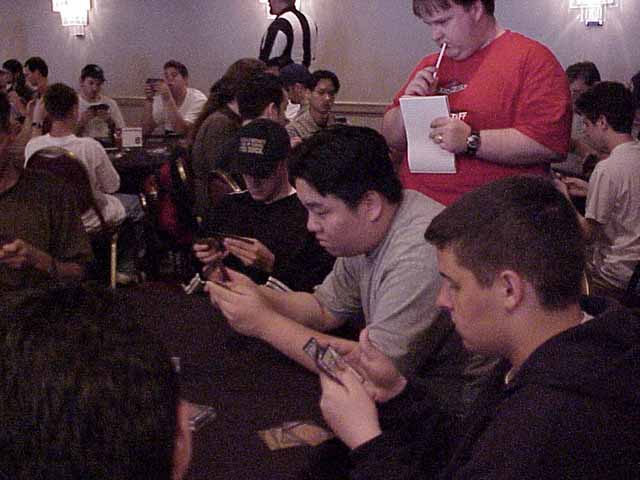 After three rounds, Terry Tsang and Pete Radonjic were in perfect position to make a run at winning this tournament. They both have 2-1 records and they wound up at Table 2 for the second draft of the day. Radonjic wound up sitting to Tsang's right and thus fed him for the Masques and Prophecy packs.

Radonjic's choices in the first pack were Thunderclap, Ramosian Lieutenant, Spidersilk Armor, and Brawl. Pete took the Thunderclap. Tsang seemed to think he had an easy first choice and took Primeval Shambler (over Rishadan Airship and Shock Troops). Tsang then took Brawl out of Pete's pack, which made me wonder if they'd be fighting for red. (My, how Ramosian Lieutenant's stock has fallen, eh?) Pete beautifully prevented any potential conflict by proceeding to draft Terry's deck for him. Well, not directly, but he made a statement. That is, Pete took Shock Troops over Sever Soul and then took Cinder Elemental over another Sever Soul. Tsang, of course, scooped up those third and fourth pick removal spells. 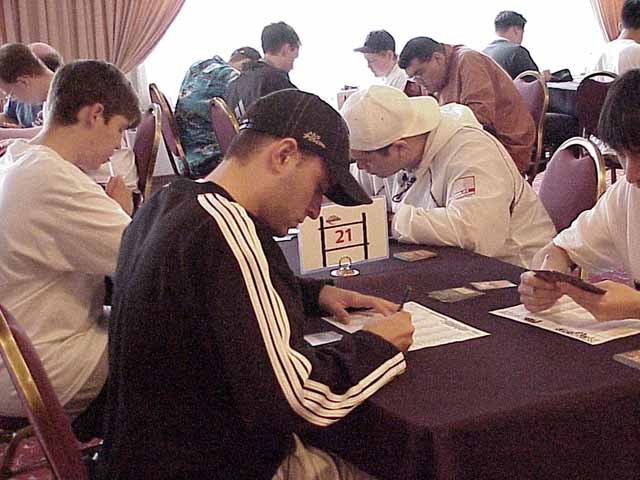 When forced to look for a second color (the red cards had dried up), in the fourth pack Radonjic elected for Rushwood Herbalist (over Alabaster Wall, Undertaker, and Flaming Sword). This allowed Radonjic to continue sending a clear "go black" message to Tsang, and it also set him up to draft a red/green beatdown deck. Radonjic took Rushwood Dryad next (passing Deepwood Ghoul to Terry) and then took Boa Constrictor (over Gush and Cateran Brute). Radonjic's green picks weren't amazing and it wasn't clear if he was correct to force red/green in his seat. Even so, you have to respect the fact that he clearly sat down with a plan and then executed that plan quite effectively. (And he did finally take a card away from Tsang when he took an Undertaker seventh when the best card in his colors was a Cave Sense.)

Tsang went into Nemesis with great black cards (whether he wanted them or not), but no real second color. Tsang then took Seal of Doom, passing Rupture to Radonjic. Radonjic first-picked a Flowstone Crusher. Tsang managed to accumulate three Rathi Intimidators over the course of the rest of Nemesis, along with a Belbe's Percher (and still no real second color). Radonjic didn't seem happy with the way Nemesis played out for his red/green deck, but I thought it went fine. After the Rupture he was passed two copies of Seal of Fire, a couple Treetop Bracers, and a Mogg Toady. Going into Prophecy, Radonjic seemed to have a well-curved red/green deck (meaning it had a nice mana curve, including many 2-mana 2-power creatures). He just needed some more creatures and maybe another way to break a stalemate.

Radonjic first-picked a Scoria Cat over Squirrel Wrangler and Thresher Beast. He then filled out his creature set with Silt Crawler, 2 Rib Cage Spiders, Whip Sergeant, Zerappa Minotaur, and a gift pick - that Thresher Beast in the pack he opened came all the way back to him. I thought he should have drafted a late Root Cage instead of a Marsh Boa, but other than that he seemed to make all the right picks, given his basic plan of forcing green/red. 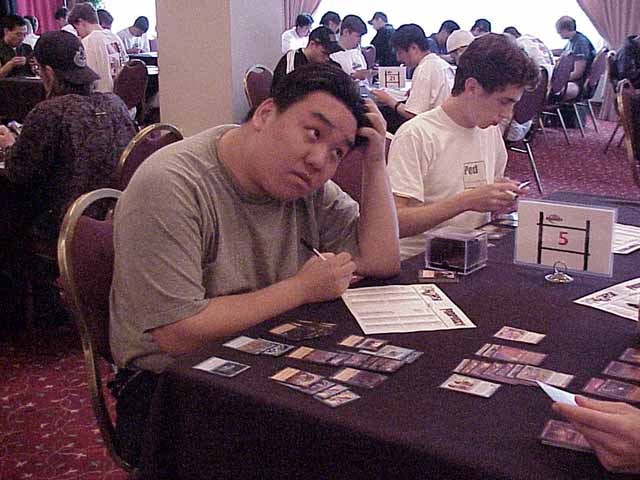 Tsang finally figured out what his second color was when he opened his Prophecy pack. He took Spiketail Drake (a 3/3 flier for 3UU that you can sacrifice to "Mana Leak" a spell). He followed up that pick with a pair of Coastal Hornclaws. So what do you do with a black deck full of small "fear" creatures and removal? Apparently the answer is to splash blue for large creatures! Radonjic continued to hook him up with black cards by passing him Agent of Shauku, Withdraw, and then Steal Strength. An eleventh pick Bog Elemental doesn't hurt either. Tsang had to be delighted with his deck.

All in all, Radonjic dictated the draft for both players. Tsang's deck looks better to me, but Pete wound up with a solid deck too and the next three rounds will show us how good their decks actually are.