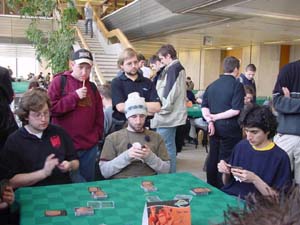 Thomas' crowning achievement in Magic is 2nd at PT London, where, in his first PT he turned a lot of heads, and made people think he could be the next Dirk Baberowski or Randy Buehler. Since then however, other things have taken precedence in his life, and only over the past 6-12 months has he really returned to competitive Magic.

On his left was grizzled veteran Alex Shvartsman, who still holds the record for most GP wins. Once again near the top of the GP standings, and requiring a couple of PT points to remain on the Gravy Train for worlds this year, he was certainly hungry to secure his status as the King of GP's

The rest of the pod in seating Order was.

With three Frenchmen in a row, it felt like they would almost certainly be co-operative, so covering Thomas and Alex, who have played team magic together in the distant past, would provide much a more interesting analysis.

The opening booster was a much easier pick for Alex than it was for Thomas. Alex took a first pick revival, while Thomas dithered over a choice between Undorak and Gangrenous Goliath. He passed the Goliath, which Alex snapped up, and took Spitting Gourna and Elvish Warrior passing Soulless one, Soulless one to cement Alex in black. Thomas' 4th pick Vitality charm left him still wondering what his 2nd color was, and with Markus on his right hoarding the red he took a 5th pick severed legion, while Alex took a Gustcloak harrier as his first white card. Thomas then took a Symbiotic Elf as a 6th pick, but the likelihood of Nantuko Husk coming back after passing 2 Soulless ones and a Gangrenous Goliath was slim, making the elf a slightly mediocre card.

The rest of the booster yielded few goodies, but Thomas did get an 11th pick Wellwisher, making him confident at least that he wasn't fighting for both Green and Black.

In booster 2 it was Alex's turn to be in charge, and in charge he was. Thomas picked a 1st pick Smother, while Alex took Nantuko Husk, before taking 2 more white cards, Harrier and Catapult Squad to cement him in white. No black was passed in these 2 boosters, but Thomas was happy with his 2 green picks of Krosan Tusker, Vitality Charm. 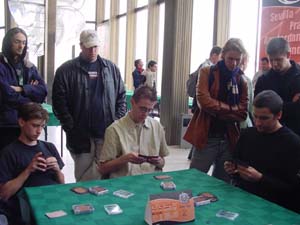 Alex's 4th pick was a choice between Nantuko Husk or Gluttonous Zombie. He took the Husk and shipped the Zombie and a Symbiotic Elf to Thomas. Thomas again took the Symbiotic Elf, but when Alex took another Husk as a 5th pick, there was very little chance of Thomas getting any kind of combo going with his Elves. He did get a 5th pick Undorak, followed by 2 Wirewood Savages, which improved his deck significantly, while Alex hated a Tribal Unity, which at the time he thought he may sideboard in, in some matchups.

The only card Thomas really needed, and didn't get was Alex's 8th pick Dirge of Dread. Without any kind of Game breaker, Thomas would largely be relying on fat monsters, and possibly cards like Krosan Vorine and Timberwatch Elf from Booster 3.

Thomas first pick in booster 3 was the stunning Gempalm Polluter, his 3rd Zombie in total (Choosing not to take Goblin Turncoat), while Alex netted an Essence Sliver and then the Turncoat. The first 3 picks for Thomas overall were not overly impressive, with his second and third picks being Krosan Vorine and Brontotherium, but was rewarded for his choice of green cards with a 4th pick Feral Throwback and 5th pick Timberwatch Elf! 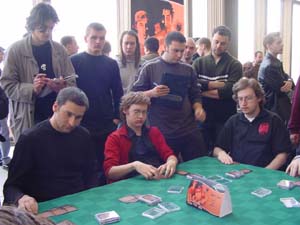 In the meantime Alex had taken a Gempalm Polluter of his own, and a Smokespew Invoker, shipping 2 Embalmed Brawlers, confident he would get them back. His 5th pick was Spectral Sliver, followed by Noxious Ghoul, who is insane in his deck. He wound up his deck with a couple of Deftblade Elites and his 11th and 12th pick Embalmed Brawlers. Thomas on the other hand had to settle for much more mediocre late picks, Vigilante and Branchsnap Lorian being the highlights.

For much of the draft the 2 competed over black, but having passed too much of a good black theme in booster one, Thomas was hurt in Booster 2 by Alex's committal to taking Zombies. However, with no red coming from Markus, there was very little Thomas could do, except hope for Exterminators and Skinthinners in Booster 3 that never came.

By the time the two had constructed their decks, they were both largely mono color, Thomas splashing only for Smother, while Alex added in 2 Gustcloak Harriers, 2 Deftblade Elite and a Catapult Squad. If Thomas could have netted a Dirge of Dread, his deck would have been much better, but by the time he took his first black card, Alex's deck was already building itself. Alex's deck ended up looking very good, if a touch removal light, and his Noxious Ghoul could be the absolute nuts if he ever saw it.