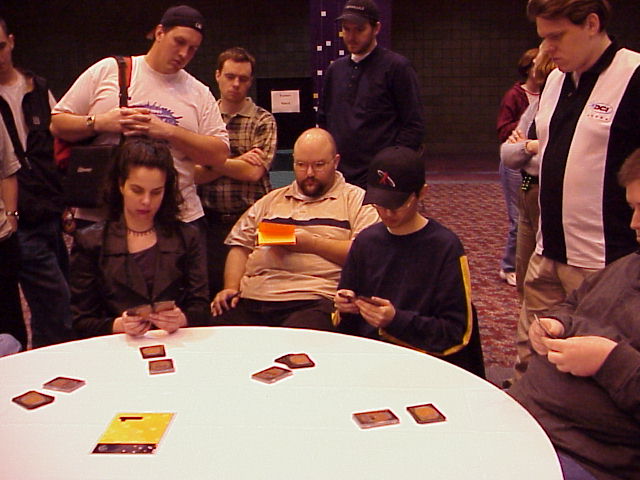 Team Deadguy member and native Houstonian Tony Tsai sat at table number one on the verge of making Top 8. He needed a solid draft and solid play to get him there, something that can easily come out of him. Tony wasn't looking to draft anything specific, just the best deck that came to him. Passing to him was the lovely and talented Michelle Bush, who has just one loss over the past two days, and also finds herself on the cusp of her first Grand Prix Top 8.

Tony's first pack had an interesting paradox - the best card in it was clearly Smoldering Tar, but Tony found he couldn't take it, as he was nearly certain that Michelle would be playing Black/Red, and he didn't want to suffer as she choked off his supply of cards if he also went those colors. The next best card was Serpentine Kavu, and he reluctantly picked it. He was right. Michelle first picked Soul Burn, and was quickly set into Black/Red, even though she had to pass a Plague Spores. Tony's second pick was Exclude, and he looked like he was going to go Blue/Green/White. His third pick was a surprise to him, as an Exotic Curse, which he pondered what Michelle had taken over it, considering that he had seen the Plague Spores from her first pack. It seemed like he was doubting whether she had gone black/red at all. In fact Michelle was still firmly black/red, as she had taken a Plague Spores over the Curse. Tsai went into pick five wondering what colors he was playing, as he hadn't had back-to-back picks of the same color, and so he picked up a Fertile Ground, looking to branch out into five colors. His next pick was Llanowar Knight, and then his confusion mounted when Halam Djinn, the hasted monster, was still in the pack at pick seven. It too joined Tsai's very diversified pile. Michelle had chosen a Cinder Shade over it. Tony finally made a back to back color choice on his next selection, choosing a Kavu Runner, and it looked like maybe he was going to be able to stabilize with red as his main color. He rounded out the first pack with some Thunderscape Apprentices and an Ancient Spring and a Tinder Farm. 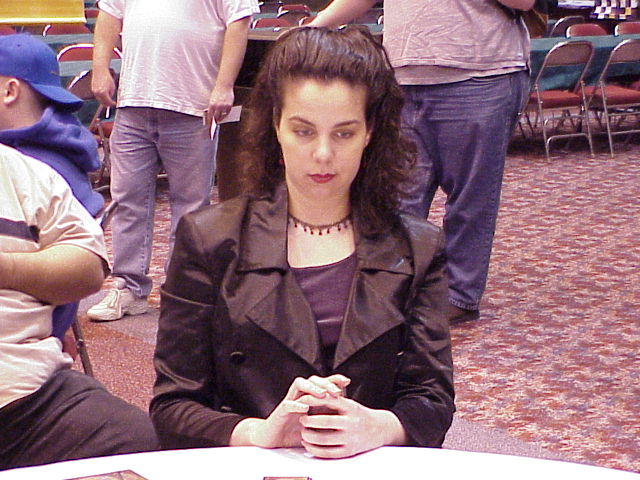 Pack number two started the same way as pack number one, with a Pouncing Kavu. His next pick was a Pincer Spider, giving him something that Red/Green desperately needs - a way to deal with fliers. He picked up several more Kavu in this pack, but took a Plague Spores over an Ancient Kavu. He also got some more flier removal, with a Canopy Surge, and some player removal with a Scorching Lava. He also got a second Chromatic Sphere, which would make it easier for him to splash for his first pick out of the third pack.

For the first time in this draft, Tony did not pick a Pouncing Kavu for his deck. Instead, he picked Reckless Spite. I'm not sure he'll play it, as the double black casting cost could be prohibitive. Michelle was stunned by how good her first pack was - so stunned she didn't even bother fanning it out until she was reminded to. Her pack had Goham Djinn, Agonizing Demise, Tsabo's Decree, and many other black and red playable cards. She took the Decree, but debated over her choice for most of the pack review time. Tsai took the Demise happily, but was also a bit stupefied by the pack's choices. The rest of the pack was standard Red/Green beats for Tony - three Yavimaya Barbarians, a Viashino Grappler, another Pouncing Kavu, a Hunting Kavu, and the underrated Savage Offensive. Tony will almost surely play the Offensive, as it gives him a good advantage in a creature battle. Tsai's deck would have been better, but Michelle did a little bit of late pack Grinching, and took a Wallop and a Raging Kavu that Tony had passed on earlier. 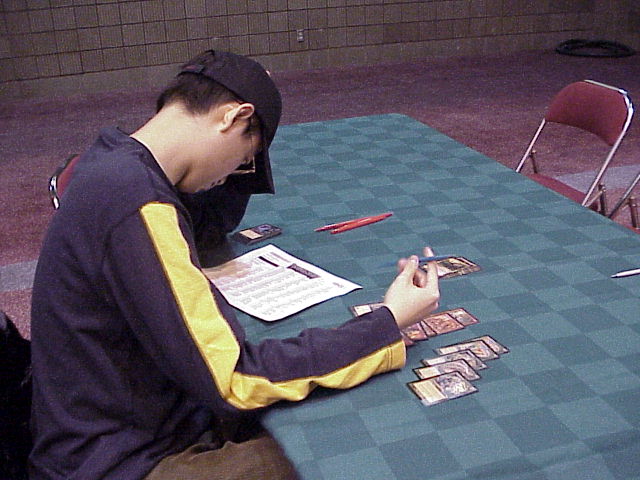 After looking at Michelle's deck, I think the way for her to lose is the same way that she lost her only match this weekend - mana problems. Much of her deck is higher end goodies, and without much early defense, she could lose if she misses a land drop. Tony's deck is a little bit faster than Michelle's, but it lacks the removal that Bush sucked up, and so he'll have to stray into a third color. This may hurt him in the long run. Without seeing the other decks at the table, I would project both players to go 2-1.