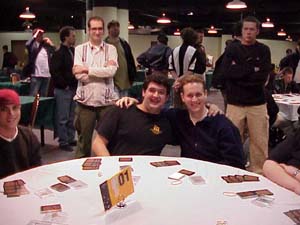 I know Bob Maher has a lot of rich friends, but I don't know if any of them will be able to give him a bigger or more heartwarming wedding present than the one Billy Jensen gave him during the second draft. "Baby Huey" was 11-0 with three rounds to go in the GP and so he needed at most a draw to make Top 8 (and could probably get in on tiebreakers at 11-3). Maher - who is getting married next weekend - was in seventh place with a 9-1-1 record and needed two wins to make Top 8 (and needed the Top 8 to stay in the Masters Series after Worlds falls off the Pro Standings).

Huey opened up his first pack and there was the rare that everyone dreams of opening first pick first pack: Pyre Zombie. Huey leafed through the pack a few times and then put Stormscape Apprentice face down on the table in front of him! Next, Huey took Shackles and passed Maher his choice of Shivan Zombie or Soul Burn (he took Soul Burn). For his fourth pick, Maher was the recipient of a Plague Spitter that fairly screamed "congratulations on your wedding, Bob!" A 11-0, Huey could clearly afford to play nice and he might need a favor from Maher some day in some future tournament. It was basically Rochester draft politics working their way into booster draft. That and the two players are friends. Later in Pack 1, Huey passed along an 8th pick Plague Spores and at 10th Huey really wanted his second Barrin's Unmaking so Maher got his choice between another Plague Spores or another Soul Burn (he took the Burn). 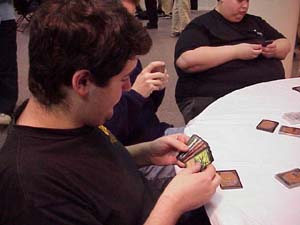 Justin Schneider saw a lot of those cards right before Huey did. Schneider has actually only lost one game the entire weekend. His 9-1-1 record is the result of an intentional draw in round 7 (which clinched day 2 and (more importantly) allowed Justin to go up to his room for an hour to watch the Maryland/Duke game) and an 0-1 loss in Round 8 where he would have decked his opponent in game 2 if there had been time for 3 more turns. Then at his first table Sunday morning, Justin opened Darigaaz and passed it up in favor of Repulse! The result was a 3-0 (6-0 in games) sweep that landed him at Table 1 for the final draft. His first pack for the second draft had Thornscape Apprentice, Shivan Zombie, and Soul Burn. He took the tapper, perhaps gambling that red and black would be over-drafted at the top table. Not only was he wrong about that, but Ben Stark (who was feeding him from Justin's right) also forced green and Justin's draft went miserably.

Maher's deck just got sicker and sicker as the draft went along. His very first pick, before Huey passed him the Pyre Zombie, had been Do or Die. Then in Pack 2 he busted open a Reckless Spite. Justin's deck got a bit better in the second set of packs (while Huey was passing to him), but in the third pack with Stark cutting him off once again Justin could do nothing but throw his hands out in frustration after thumbing through the packs he was being passed. Meanwhile Huey was drafting a perfectly reasonable blue/white deck with fliers and tappers. 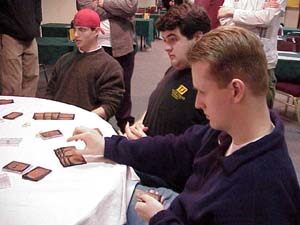 The gifts just kept coming for Maher in Planeshift. His own first pick was merely a Mire Kavu, but Huey started nodding when he saw a Magma Burst in his pack, thinking "yup, here's one for Bob." More nodding occurred when Huey saw a Terminate in his second pack: "Bob will like this too." A couple Caldera Kavus and Death Bombs later, Huey's masterpiece was complete. Bob actually complained afterwards that he thinks he might have screwed his deck up. He declined a couple early Shivan Zombies in the very first pack and wound up with an extremely top-heavy mana curve that includes three Soul Burns, but his only 1 or 2-mana creatures are a Rogue Kavu and a Phyrexian Battleflies. He's running Star Compass in an attempt to compensate for this weakness.

I talked to both players after the draft and Maher asked me what on earth Huey had first picked. He also commented that he was pretty quick on his feet and so he figured out what Huey was up to pretty quickly and was more than happy to play along. Huey explained that Bob was a friend of his and they hadn't talked ahead of time or anything, Huey just did it out of the goodness of his heart. We should all have friends like that.