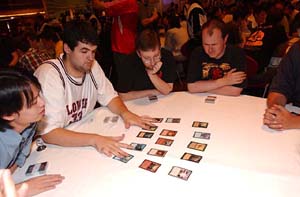 William "Baby Huey" Jensen has been widely considered one of the top players in America for years, and quite possibly, one of the best Limited players in the world. This past season he put up the finishes to affirm his reputation, posting back-to-back Top 8's in Chicago and Venice, which were Rochester Draft and Block Constructed respectively. Even though Huey is always considered a force to be reckoned with, many are anticipating more successful tournaments, and are predicting that Huey could potentially be spoken in the same breath as Jon Finkel and Kai Budde.

Jensen's second Rochester Draft pod today had its fair share of star power. Directly to his left was Rob Dougherty, and two spots away was Carlos Romao, the reigning World Champion. Across the table was Mark Zajdner, and two spots to the right was Olivier Ruel. Jensen was in seat one, and opened the first pack. It contained Ascending Aven, Elvish Warrior, Explosive Vegetation, Krosan Tusker, Piety Charm, Goblin Taskmaster and Treespring Lorian. This was a great pack to open, since it gave Jensen the obvious Ascending Aven pick, which was the only good blue card. The rest of the pack was loaded with green cards, a color that's a sub-optimal pairing with blue in this format anyway. Dougherty picked up Elvish Warrior, and Wolfgang Edar got Goblin Taskmaster. Mongkol Tachasukjai was to Jensen's right in seat eight, and took Forgotten Cave and Demistify, signaling red/white.

Unfortunately, the second pack contained Ascending Aven and Aven Fateshaper, two great blue cards. Jensen had the last pick, and still got a solid wheel of Riptide Biologist and Mage's Guile. If there was any fear that the blue picks would be hurt by two quality cards in the color being put out there in the second pack, they were eased right away. Mistform Dreamer arrived seventh pick, and Jensen went into a second color when the pack came back around, taking Ebonblade Reaper. This was a bit unconventional, since Mongkol to his right was in black at the time, so the maneuver put Jensen into a position where he wouldn't be in a great position to clean up with Scourge's great black cards. Choking Tethers came in the following pack, and then Olivier Ruel opened Arcanis, the Omnipotent. Ruel was already committed to red/green, so he simply smiled and took Shock, knowing that Arcanis would pass through Mongkol, who was white-black, and go to Jensen. It wasn't all bad news for Mongkol, however, as he opened the last pack and gladly took Exalted Angel. Aven Fateshaper was remaining, and went to Jensen.

In Legions, Jensen went about solidifying his mana curve. He picked up a pair of Goblin Turncoats, along with Keeneye Aven, Hollow Specter, and a thirteenth pick Crypt Sliver. When Jensen opened his Legions pack, which was the last one of the set, it literally contained no playable cards in his colors. Instead of playing nice, he decided to hate draft Timberwatch Elf from Ruel, who had shipped Arcanis in Onslaught. In Scourge, Jensen made picks that most players would have done much differently. He took Carrion Feeder over Shoreline Ranger, and then a Bladewing's Thrull over another Ranger. Undead Warchief over yet another Shoreline Ranger was an unquestionable pick, and in the last pack, Jensen took Zombie Cutthroat over Rush of Knowledge.

Sideboard: Was there something that specifically went well?
Jensen: I got lots of fliers.

Sideboard: Why take Zombie Cutthroat over Rush of Knowledge in the last pack?
Jensen: It's better. 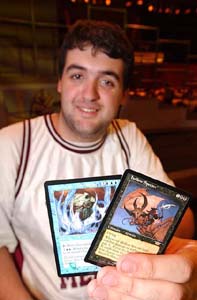 Sideboard: You think it's just better straight up? In his Scourge Limited review article, Kai Budde said that Rush is beter.
Jensen: Well, I'm sure Kai would have taken the same thing I did. My deck is all aggressive, and Zombie Cutthroat is insane in an aggressive deck.

Sideboard: So you're looking at the early game and mid-game, and not really looking so much at the late game?
Jensen: All early game.

Sideboard: You never play it? Why?
Jensen: I just don't think it's good. I have played it, but I don't like to.

Sideboard: You must have been very happy with the first pack, since it contained one really good blue card and put everyone else into green.
Jensen: The packs did open well for me. The guy to my right was playing white/black, so I had to share a color with him.

Sideboard: I noticed that you went into black with Ebonblade Reaper, and I couldn't figure if you were trying to bully him out of the color, or...
Jensen: I was hoping he'd just quit black, but it didn't work out. The thing is, he generally didn't even take the best card, or took a white card. It didn't end up being that big of a deal, and there aren't really any cards I wish I had gotten.

Sideboard: The odd thing to me is that it seems you don't want to go into black when someone has it on your right, because you won't get as many good black picks in Scourge.
Jensen: I didn't want to switch into white, because I didn't have any Soldiers for the good white cards. I didn't want to play red, because it's just not good. Not to mention, two guys to my left, and one to my right were red. I don't want to play blue/green, so whatever. I figured that the Scourge black is deep enough that I can just fill my deck with it.

Sideboard: Something that surprised me a little was...
Jensen: The Timberwatch Elf pick?

Sideboard: Yeah. Usually that would make sense, but it seemed odd because Olivier hooked you up with Arcanis, and then you counterdrafted Timberwatch Elf from him.
Jensen: If I had a pick, I would have taken anything. Any card in that pack I wouldn't have played. I would have taken, whatever, Goblin Turncoat over it. I'm not going to take a card for no reason, and Timberwatch is good against me too.

Sideboard: Were you concerned that he would start hatedrafting cards from you?
Jensen: Yeah, because he's the kind of person who would.

Sideboard: He did give you an Arcanis though!
Jensen: Eh, screw him.

Sideboard: Is there anything your deck doesn't have that you want?
Jensen: Maybe another Choking Tethers. I like my deck, and I like my chances. We'll see.

Sideboard: Is there anything at the table that you're concerned about?
Jensen: Exalted Angel.

Sideboard: That's it?
Jensen: Yeah. Well, Carlos has the best deck at the table. I haven't even mentioned him, because I assume he's going to 3-0.

Sideboard: So you don't think you're going to 3-0?
Jensen: No. Well, maybe if Carlos loses. His deck is retarded.

Sideboard: He got all those Shoreline Rangers you were passing, right?
Jensen: Well, whatever a Ranger. But he has Catapult Squad, Warchief and fliers.