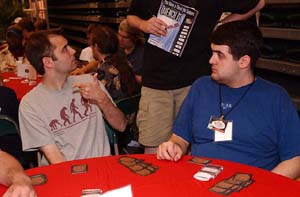 Billy Jensen and Chris Pikula are two of the most well-liked guys on the Pro Tour. The two veterans are always quick with a joke and often can gather crowds with their antics and storytelling. But now it's time for business. With 6-3 records, Pikula and Jensen are in the tenuous position of needing to 3-0 the final draft and hope for the best when the Top 8 tiebreakers are calculated.

Jensen had the luxury of choosing Overrun with his first pick, whereas Pikula had to agonize over a very weak pile of cards, eventually picking Aether Burst. The Burst used to be a first pick when two or three packs of Odyssey were involved in the draft, but now that it's just one, you can't guarantee much more than Unsummon. And Unsummon is no first pick. The pack was weak enough, though, that what Pikula was really picking was a color, not a specific card.

Jensen got a Krosan Avenger out of Pikula's pack, and Chris grabbed an Aven Fisher and passed a Springing Tiger to Jensen. Pikula, who drafted blue/black in the first draft and managed a 2-1 record with it, then grabbed back-to-back Afflicts. The problem was that the second Afflict came packaged with a Caustic Tar, leaving Pikula in a bad position. Pikula had to hope that Jensen had already settled into two colors and wouldn't be tempted by the Tar.

That wasn't the case. Jensen's 4th pick was Spellbane Centaur, meaning all he had was green cards. So he snapped up the Tar and was now in the catbird seat for Torment black.

Jensen was then passed Patrol Hound and Thermal Blast. He took the Hound, hoping Bigos to his right would be lured into red by the Blast. Jensen figured Bigos was already in green, since Jensen passed good green cards to him every turn, and Jensen would rather him be green/red than green/black so he could clean up in Torment.

Jensen then picked up an Ember Beast, an Acceptable Losses, and an Embolden to keep his options open once the green and black dried up, and Pikula grabbed an Aura Graft for his sideboard.

In Torment, Jensen took Grotesque Hybrid first, hoping to cut off the black. Pikula too a Crippling Fatigue, and then second-picked a Hydromorph Gull. Things went downhill for Jensen quickly – he had to take an Organ Grinder third, and then he took a Possessed Barbarian fourth. He figured Bigos was cutting off the black, meaning the red should start to come.

But that didn't happen, either. The rest of Torment gave Jensen a Waste Away, a Far Wanderings, a Shade's Form, and an Acorn Harvest – not the best for solidifying a mana base. Pikula got a Breakthrough, a Deep Analysis, and Organ Grinder, and a Mind Sludge, plus a Pardic Collaborator and a Tainted Peak to support it as a possible splash.

In Judgment, Pikula took a Treacherous Vampire, passing Erhnam Djinn to Jensen. Jensen had first-picked Toxic Stench from a pack that had no good green somehow. Pikula had to make some not-so-good picks, like second and fourth pick Lost in Thought and sixth pick Earsplitting Rats, but he did nab a Wormfang Crab, a Toxic Stench, an Aven Fogbringer, and a Mental Note.

Jensen took a Phantom Tiger over Arcane Teachings, but then had to take a Firecat Blitz froma pack with no black or green. He then grabbed a Sylvan Safekeeper, but the rest of his draft was a mishmash of mediocre red and green cards, plus a counterdrafted Valor.

Neither deck looks amazing, and to be honest, I don't think either of these gentlemen will be making the Top 8. But they've been playing Magic for a long time, and either may have the mettle to do the improbable.

But first, they have to face each other in a Round 10 Feature Match...