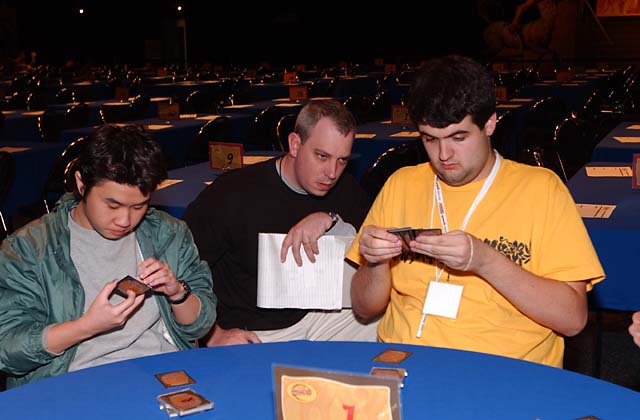 William "Baby Huey" Jensen is considered by some participants in this game as the "world's best drafter." That title was earned in the wee hours of the morning over several years of Pro Tours, drafting against the sharks in two-on-two's and three-on-three's. Now he is one of the sharks, and has been cleaning house on Magic Online like no one's business. Let's see if those skills are transferable to the real deal.

Huey was faced with the difficult Aven Windreader versus Concentrate decision (see Ed Fear v. Eivind Nitter, Round 14, Pro Tour-Nice) and went with the sorcery over the flier. His next pack was all garbage except for a Patrol Hound, which he took, looking to build an aggressive blue/white deck. The rest of his Odyssey picks were decent for that strategy: Aven Cloudchaser, Repel, Patrol Hound #2, Luminous Guardian, Deluge, and a delightful eighth-pick Psionic Gift.

But all was not well for Mr. Jensen. Han How had taken the rare from the bad Patrol Hound pack, a bombtastic Stalking Bloodsucker. From there, he went right into white, nabbing a Mystic Zealot, Aven Flock, and Hallowed Healer with three of his next four picks, but still letting enough white through to keep Jensen from figuring out what was happening. Black seemed slightly underdrafted as well, allowing Han How to get a Patriarch's Desire seventh and an Execute tenth.

In Torment, Huey drafted three consecutive Skywing Avens first, taking the third over Breakthrough and Compulsion. After that, he took Compulsion over Teroh's Faithful, counterdrafted a Gloomdrifter, and then got a bunch of middle-of-the-road cards like Mystic Familiar, Ghostly Wings, Stern Judge, and Equal Treatment.

Han How did pretty well for himself in Torment, getting a Cabal Torturer, Chainer's Edict, Crippling Fatigue, Teroh's Faithful, and Hypochondria. Huey left him enough good white cards (considering how bad white is in Torment) to shore up his deck.

With the first pick in Judgment, Huey took Prismatic Strands over Shieldmage Advocate, which is an odd pick. His plan must be to simply race with his Skywings and not worry about the long game. He did nab a Nomad Mythmaker that Han How let slip by, which will combo well with Ghostly Wings (and Psionic Gift).

Overall, Huey's deck is a one-trick pony, and if his opponent can handle Skywing Avens, he's going to be in trouble. I expect a 1-2 record from him. Han How, on the other hand, has more robust creatures. Yes, he's a little light on the removal, but the Bloodsucker alone is good for at least one match win. I predict 2-1 for him and a good chance at the Top 8.