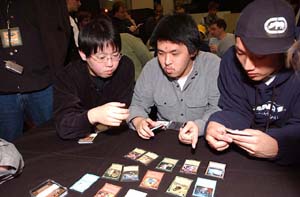 The ever surprising Dutch team of star-maker seemed to have the early run of the packs, solidifying their color choices with a few specific picks. The Panzer Hunters quickly adapted though and presented a unified drafting front, moving their colors in such a way to nullify any long term draft advantage that the Dutch tried to garner. They maneuvered their way into choosing colors that not only maximized their seating postion but also took of their opponent's choices.

The table was seated as such: (Frank Karsten opened the first booster of the draft)

This matchup didn't fare so well for the Dutchman, as Ishida seemed to be placed in a more favorable seat for a Blue/White player, though Victor did get a number of creatures that work well in the combination, notable some Werebears and Springing Tigers. The Dutchman also was able to get a late gamebreaker Cultural Exchange which could prove important in the slow matchup.

Ishida seems to have the lions' share of good blue, getting Cephalid Broker and Looters, Aven Smokeweaver as well as Nomad Decoy, all of which are problematic for the removal light U/G/w deck. Ishida's problems started significantly in the Torment boosters, as he failed to get any significant picks that improved his draft. In the end, the Japanese should come out the winner with his superior card quality derived from the multiple Looters.

Match B – Momose vs Karsten

This is where the Europeans seem to have a siginificant edge, with Karsten having a terrific Red Green deck that was largely unfettered by the ebb and flow of the draft. With two Firebolts and two Fiery Tempers, very little should get in the way of his deck. Karsten also has a decent amount of quality creatures and made sure he was well-metagamed with two Krosan Constrictors both of which will prove to be golden versus the Blue/Black mage.

Momose though the underdog in this matchup, is far from helpless with a fine array of black creatures (Faceless Butcher, Soul Scourge) but in the end the speed and burn should make any effort inconsequential to the rampaging Dutchman. 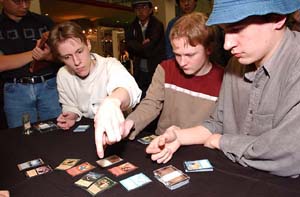 The match is likely to come down to this crucial pairings with both sporting multiple bombs in their draft decks. Jelger sports a first picked Cabal Patriarch as well as two Faceless Butchers and a Hydromorph Gull. This backed up with a Morbid Hunger and two Syncopate is sure to make life tough for the Reiji.

Ando's deck is a creature removal heavy red black deck that is peppered with bombs, with Stalking Bloodsucker, Possessed Barbarian and a Pardic Collaborator to deal with the Dutch's lifetotal once the board is clear. This matchup will likely come down to draws, with the last man standing likely to emerge winner for his team.