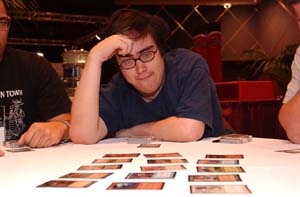 Those three sat, in that order, in seats 7, 8, and 1 at the top table for the second draft of Pro Tour - San Diego. The winner of the table could enter Day 2 as the lone undefeated player in the tournament, so the stakes were quite high.

As tables full of good players will often do, everyone settled into colors and, for the most part, cooperated. Crosby went into green/red once it was clear the people on his right were going to fight for blue, which left Osyp clear to draft blue/white, and Zvi went into red/green. Dirk chose blue/black.

Zvi's early picks were somewhat sketchy, not by choice but by card quality - a few Moment's Peace, an Anarchist, and a Cartographer. Eventually some of the good cards started to slip by Crosby, such as Rabid Elephant and Flame Burst. But all through the first set of packs, Zvi seemed agitated by the poor quality of his deck.

He never strayed, however, and was rewarded by opening a Squirrel Nest and another Rabid Elephant. As the draft wore on, his creature ratio never really improved, and he was "forced" to take Still Life of Seton's Desire just to give himself more potential attackers. He later said that he couldn't afford to take the Desire because there was no guarantee that he'd ever get enough cheap guys to put it on. "You cannot anticipate anything in this format. You have to improvise the whole way."

Eventually things started to go his way, as the Firebolts, Ember Beasts, and Reckless Charges that his deck needed to succeed were opened around him. As the draft wound down, Zvi became happier and happier, and the icing on the cake was the Wild Mongrel he opened in the last pack.

After the draft, Zvi rated his deck a 9 out of 10, saying he could go 2-1 with it easily because in general the card pool was so weak. He didn't fear any one opponent, but this reporter feels that Zvi's deck is average for table, and he'll need to get lucky to beat Raphael Levy's 3 Wild Mongrel green/black deck or Joe Crosby's Beast Attack and Overrun.