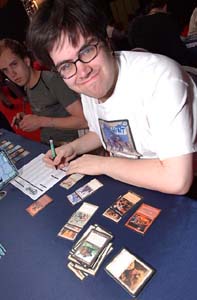 Perhaps the biggest story today is "Zvi's Gambit". Working around the theory that most players will avoid drafting white due to its weakness in Torment, Zvi announced to the world on the internet that he intended to force white from the start. Just to be sure everyone got the message loud and clear, he wore a shirt proclaiming himself to be the white mage. The desired effect is that Zvi will clean up in white, with players gladly passing him Zealots, Aven Flocks and Shelters, not wanting to fight with him over the color. Some players are a bit skeptical of this strategy's effectiveness, but so far the numbers don't lie: Scott Johns and Zvi Mowshowitz are the only two players wearing shirts that proclaim they are "pretty fly for a white guy", and they are both 3-1.

Zvi opened a pack with Resilient Wanderer, Nantuko Disciple and Morbid Hunger, and gladly took the powerful white creature. From there, he forced white as promised, taking Hallowed Healer over AEther Burst, followed by Master Apothecary. He leaned into a second color with Flame Burst and Barbarian Lunatic, and picked up a gift in a seventh pick Mystic Zealot. Pilgrim of Virtue also came around late to help power the Apothecary.

The second pack presented a bit of a problem: Cabal Patriarch. The Patriarch is one of the most powerful cards in the Odyssey limited format, but Zvi was nowhere near black, and already had a triple white card in the Apothecary. Still, he decided to take a gamble and pick it up over Flame Burst. Zealot came second pick, and the third pick was the moment of truth: take Childhood Horror and lock into black, take Barbarian Lunatic and go back into red, or take a Millikin and stay neutral for the time being. Zvi decided to take the Lunatic and didn't look back. Shelter came around seventh pick, and Torment provided Temporary Insanity along with Reborn Hero and Sonic Seizure.

(I sit down with Zvi, and before I can ask a question he immediately starts explaining his Cabal Patriarch decision)

Zvi: I made one huge mistake, luckily it didn't backfire too much. I took the Cabal Patriarch sixteenth, for no apparent reason. I'm like, "What am I doing? I have a Master Apothecary! I'm going to play BBB and WWW after taking nothing but white and red cards? What am I, crazy?" Luckily, third pick I was looking at the Barbarian Lunatic and Childhood Horror, and my brain kicked in and I didn't take it (the Horror).

Sideboard: Well I was thinking, "Why not just force black there?"
Zvi: What's my mana base exactly?

Sideboard: Right.
Zvi: If I don't have Master Apothecary I think I can abandon it, but the issue is I wasn't passed black, so I have to assume Jens is black/blue at this point (Jens was feeding Zvi). If I'm not going to get passed black on the way back, then it's not going to work, and I see no reason why I should get black back given my strategy. I'm not expected to take black that often. I just see no reason why I should expect players to pass me black and this is just such a huge commitment. I can't just splash for Cabal Patriarch. I had a Flame Burst, so I should have just taken a second one, and pass Jens the Patriarch securing him away in the corner with my compliments, and that would have been the end of that.

Sideboard: Isn't Patriarch so dominating that it's worth it to force black? Even if you get mediocre cards, you can just play the Patriarch and win.
Zvi: No, just because I had a good deck going, and if I do that, I take a huge risk. The deck might not come together...what if I don't get enough cards? If black gets cut off later, I'm totally screwed.

Sideboard: But isn't black deep enough in the Torment pack that you can pull that off?
Zvi: It can be, and it often is...

Sideboard: Well lots of black did come to you.
Zvi: Lots of black came to me, more than I deserved. But also, I'll trade the black I would have gotten for Temporary Insanity almost. It's huge, and if I opened the first pack and wasn't playing red, I would have to take Militant Monk, which I got ninth instead. Sure, I got passed black cards, but there's no way I should get passed Shambling Swarm and Crippling Fatigue in the same pack. It turned out I was wrong about Jens I guess, but then again if I had passed him the Cabal Patriarch my cards would have been better because he would have been securely in black and he would have took that Shambling Swarm. Once he has triple black once, he might as well take it again. So, I probably would have gotten a better card out of that pack too, and then it all snowballs.

My whole strategy is based around the snowballing effect of opponents who don't know what to do, because basically you force them into doing what you want them to do, and then they keep rewarding you later and later. Plus, I mean...should we reward the shirt for the seventh pick Zealot over here? The shirt works.

Sideboard: There are some people who are saying this strategy isn't worth it, and that someone on your right could cut off all your white because you're sending that signal for them. Do you think there's any merit to that argument?
Zvi: Anyone who says the strategy doesn't work because players will hate you out is just fooling themselves. There's just no way. Dougherty said, "If I'm sitting on your right, I'm drafting it." I told him, "I call." I move all my chips into the center of the table. I don't believe you. I simply don't believe it. I don't think people can afford to do it. You will not throw away your Pro Tour, especially when you get to a 3-1 table, just to spite someone. That's exactly what you're doing, because you know that in pack two you will get nothing. So, you're potentially in a worse position than usual, and there will normally be another white player somewhere across from me anyway. Why throw your career to the wolves for this? Just to frustrate someone who...who is a nice guy! I think.

Sideboard: Okay, so just to simplify it, do you think there's any merit to the argument that it isn't flexible enough?
Zvi: I think that you craft your own destiny. You create situations where normally you would have no outs or you would see something that you wouldn't expect to see, or you'd have to guess correctly. Here, you get the out. It's fair to say, "Sure, if I happen to walk into the wrong draft with this strategy, I'll lose" but if you walk into the wrong draft with the wrong signals you'll lose that way. It's no different.

Sideboard: Well let's say for example you open Overrun and you get shipped...
Zvi: I'll ship it (the Overrun).

Sideboard: So you'll ship Shower of Coals, Overrun...?
Zvi: I'll ship Shower of Coals once, if I get passed that I'll snap it up like there's no tomorrow. I'll double back for white later, because red/white is fine as long as I get the go ahead and I felt like I got the go ahead in this draft. Mad Dog came ninth and stuff like that. (Early on) I got passed Ember Beast with Chainflinger and I thought "Well, that's the signal." Then I got the Flame Burst so I figured I'd go in, and I got Blazing Salvo for free...right now I'm debating if I'm going to play it or not.

Sideboard: How do you feel this deck turned out?
Zvi: It could be more over the top than it is. The red support in pack two could have been better. It's a fine deck. This is a fine deck.

Sideboard: Do you think that if you had stuck to black going into Torment you would have gotten the Shambling Swarm and other black cards instead of this red (Barbarian Lunatics, Sonic Seizure, Temporary Insanity) and the deck might have been better?
Zvi: If I did that, I would have been stuck with a mana base of something like ten/eight. I'd be trying to play triple black cards on turn four. My cards would be better, but my mana base would suck, whereas here my mana base looks like it's eleven/six, and I love it. This deck is very consistent and I have no problems with it. I did the right thing. I could have expected a little bit better later on from the red, but it's fine. The best thing would have been to take the Flame Burst there instead of the Cabal Patriarch and I would have been completely happy.

Sideboard: Well, obviously the strategy works since you and Scott Johns are both 3-1...
Zvi: I think you're making the mistake of drawing from a very small sample. It's the same way I would tell you that the strategy doesn't necessarily not work if we both had gone 2-2 or 1-3, so the fact that we're both 3-1 doesn't mean much. The fact that I got a seventh pick Mystic Zealot at the 3-1 table says a huge amount, because there are almost no packs in existence where that would naturally happen. People would see a fifth or sixth pick Mystic Zealot and just switch into white immediately, and that clearly didn't happen. I would have been screwed by that Zealot in a normal draft if it had gotten to the third or fourth pick. It would have ended up screwing me if I had just not worn this shirt and played white because of the Resilient Wanderer, like I would have because I opened it. I would have normally been white anyway because I got the Wanderer and Master Apothecary, and I'm assuming the other guys didn't want to take the Apothecary...

Sideboard: But because you wore the shirt...
Zvi: ...right, If I hadn't worn it I would have been completely screwed, because Jens would have picked up that Zealot, I would have taken the Cabal Patriarch, and he would have cut me off in one of my colors, possibly two, and I would have this horrible deck. Well not horrible, I'd be decent anyway, but I like the deck I have right now better than the deck that comes out of that theoretical scenario. So I'm a happy man.

Sideboard: Any predictions?
Zvi: This should 2-1