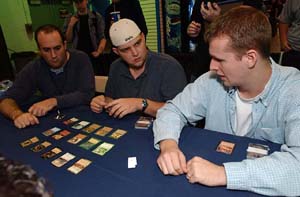 Wise, Reeves and Maher are definitely an odd trio as far as combinations of personalities go, but they're also three people you don't want to sit across from at any Pro Tour, much less one where they're working together. Wise and Maher are veterans with Pro Tour Championships to their names in addition to other high finishes. Reeves broke upon the competitive Magic scene with a Top 8 at Pro Tour San Diego, and is considered to be one of the best Limited players around. Their opponents may not have the same individual credentials, but Stalking Tiger, Hidden Gibbon should not be underestimated. The Jersey trio came one match win away from Top 4 at last year's Team Pro Tour in Madison Square Garden, and are looking to finally achieve that goal today. Just like Courtney's Boys, they have a 7-1 record.

Urban opened the first pack and gladly took Shadowmage Infiltrator, leaving Rabid Elephant for Jordan. The pack came around the table and Wise took Dirty Wererat over Whispering Shade, which is usually considered a top pick for the black on black matchup. Reeves drafted Repel, and Maher took Mystic Zealot. Ravitz wheeled Whispering Shade to threaten Wise's black, along with Patchwork Gnomes. Jordan's pack put him further into green with Springing Tiger, Wise took Ghastly Demise, Reeves drafted Syncopate, and Maher added to his white with Aven Flock. Wise opened and took Rabid Elephant, suggesting that he was leaning into black/green. Reeves got the powerful Cephalid Broker, and Maher leaned into blue to support his white with Repel. Ravitz picked up a late Springing Tiger, suggesting he might go into black/green as well.

Ravitz opened a great pack for his team, taking Roar of The Wurm while Urban got a Windreader and Wild Mongrel went to Jordan. At this point, Jordan was green with no commitment to a second color, Urban was black/blue, possibly splashing red, and Ravitz was black/green. Stalking Tiger, Hidden Gibbon had no white drafter.

Shambling Swarm went to Ravitz, while Maher took Compulsion, and Reeves went deeper into black with Cabal Torturer. Wise took Sonic Seizure, suggesting a switch into red. The following pack gave Reeves Crippling Fatigue, and Wise Centaur Chieftain. The next one was even better- Reeves got Faceless Butcher, and Wise drafted Narcissism. Wise opened the next pack and took Fiery Temper, signifying that he had committed to a green/red switch. This gave Jordan Llanwan for Maher's white/blue deck. Jordan opened the following pack and it contained a second Llanwan, which obviously made him very happy. Urban opened his second bomb of the draft in Ambassador Laquatus, and Ravitz got a Narcissism of his own to match Wise's.

The first Judgment pack gave Urban Masked Gorgon, Jordan a Giant Warthog, Wise Exoskeletal Armor, Reeves Wormfang Crab, and Maher Shieldmage Advocate. The next pack gave Reeves an incredible game breaker in Filth, Maher his second Shieldmage Advocate, and Ravitz Worldgorger Dragon. As the packs wound down, Reeves got a second Wormfang Crab, and opened a third one, but passed it to Maher who needed a solid win condition. Jordan also picked up Spelljack in the last pack.

Sideboard: How do you guys feel the draft went?
Wise: We feel very well about this draft. We think we out-opened them, and outdrafted them.
Reeves: Ditto.
Maher: It wasn't their fault necessarily. I don't think there was much they could have done the way the packs were opened.
Wise: About those two Llawans...Bob only has two blue creatures.
Maher: When he took the two Llawans, I had zero blue creatures.
Reeves: I thought (Urban) was going to take it. If he had taken Llawans...
Maher: If he had taken Llawans, (Reeves) couldn't win.
Reeves: I could win, I could kill it with like three cards in my deck, but it would have wrecked me. It would have set me back so far it would have been ridiculous.
Maher: My opponent took two Llawans, and at the end I took a (Wormfang) Crab just so he'd have to play with both of them. I didn't have a single blue creature. 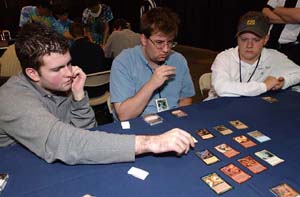 Sideboard: Gary, are you going to splash black?
Wise: I have a lot of cards here. I don't think it's going to be necessary.

Sideboard: I noticed that during the first pack you took Dirty Wererat over Whispering Shade. Is that something that you think is just better for the black on black matchup?
Wise: Well, it's really good. Whispering Shade requires a certain amount of dedication to black. Wererat is really good in the black on black matchup because it's really hard to kill. The matchup is about kill that, kill that, kill that...
Maher: It was also really early, and a lot of teams have been putting red/green against the black player, so if he takes Whispering Shade his opponent might just go straight red/green and then he's wasted a pick. If Gary takes the Wererat, his opponent takes the Shade, and now (Gary) can go red/green and get the favorable matchup and waste his opponent.
Wise: My deck is very good, so it worked out really well.

Sideboard: What are your thoughts on your matchups?
Maher: I'm going to have a very hard time killing my opponent. Very hard.
Reeves: All of my creatures are unblockable. I've got two (Wormfang) Crabs.
Wise: If my opponent can get down Shambling Swarm it might be a problem, but otherwise I think it's a really good matchup. I'd blow him up.
Maher: And lose two cards?
Wise: Yeah, I would.

Sideboard: Are there any specific cards that you guys are afraid of?
Maher: He has Seton's Desire. No Floating Shields got opened, and I really wanted one so I could just make a guy pro-Green and Disenchant Seton's Desire whenever it hits the table. He's blue/green, so it's just going to come out as a Lure, so I'm going to have to be very careful with my cards that deal with it. I may also play my two Disenchants.
Wise: No one on their team is playing white, right?
Reeves: I don't think so.
Maher: The first two drafts didn't go so well, but I'm very pleased with this one.
Wise: The fact that we managed to go 1-1 in the first two drafts is a good thing.

Sideboard: So are you guys predicting 3-0?
Reeves: No! Don't jinx the no-hitter!
Wise: I think our chances of winning are pretty good.