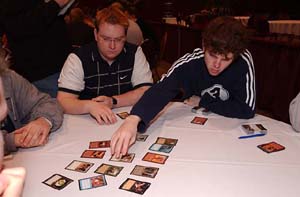 Two things can go wrong in a Rochester draft - the packs can be unfriendly, not providing you with the key cards you expect in your colors, or the people around you can cripple you by switching colors and hate drafting. Unfortunately for Dan Clegg, both of those happened to him in the third draft of Pro Tour - San Diego.

Clegg, a two-time Top 8'er, was in third place overall at 6-0-1 going into the draft. He ended up in seat six, sandwiched between 7-0 Swede Jens Thoren and Phoenix Foundation's Dirk Baberowski. Also at the table were Canadian Jeff Cunningham in seat 1, followed by powerhouse Kamiel Cornelissen in seat 2, Uruguayan hero Scott Richards in 3, and French up-and-comers Farid Meraghni and Gabriel Nassif in 4 and 8, respectively.

The front half of the table fell into place nicely: Cunningham staked a claim on U/W, Kamiel went into R/G and passed Aboshan, Cephalid Emperor to Richards, who was also U/W, and Meraghni also entered red/green.

At Thoren, things got a little weird. Since none of the first four players were drafting black, Thoren had little need to take anything but black for the first several packs. In fact, he took a Morbid Hunger over a Cephalid Looter just so he wouldn't have to decide on a second color. Now, leaving your options open might be great, but it tends to make the people around you nervous, since they never know when you are going to take their "bomb" card and slide into one of their colors.

Clegg, meanwhile, was trying to deal with Dirk's brazen decision to draft blue right behind him. Clegg had made it pretty clear from the start that he had planned on being blue/white, taking mediocre cards like Luminous Guardian just to send strong signals. But Dirk just didn't care, and was picking up blue cards like Rites of Refusal and Thought Eater to go with his red creatures.

When Clegg opened Roar of the Wurm, he could have passed it to Dirk, which may have given him incentive to abandon blue for green. But he was greedy, and decided to take it for a splash in his own deck. Dirk raised his eyebrows, and from there out kept drafting R/U, allowing Nassif to switch into green.

Thoren was keeping everyone guessing still, taking almost straight black but dabbling in white (Gallantry and Angelic Wall), red (Shower of Coals), and blue (Careful Study and Seafloor Debris). Clegg and Meraghni kept giving him the evil eye, hoping he'd make a decision and stick to it.

Of course, Clegg wasn't happy when Thoren eventually settled on white with Embolden and Aven Cloudchaser. So now Clegg was in a pinch with Thoren in white on his right, and Baberowski with blue on his left.

To top it off, the card pool ended up being bad. Zero Second Thoughts, zero Kirtar's Desires, and zero Psionic Gifts, all staples in successful U/W archetypes.

Clegg's deck has two important components. One is his Cephalid Looter, which will allow him to cycle his sketchy cards like Rites of Refusal and Cease Fire into better tools. The other is his "InQuest combo" of Chamber of Manipulation and Animal Boneyard. Most decks have no way of dealing with that pair of enchant lands once they come out, and if it happens, victory should be his.

That said, Dan's deck is in bad shape compared to the likes of Kamiel, Meraghni, and Richards. If he faces any of those people, he'll have to have some great draws to pull through.