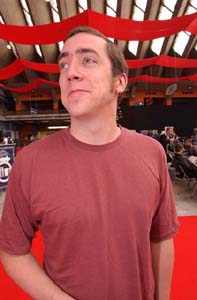 The King of Beatdown sits down at his seven person table between Alex Shvartsman and Frederic Courtois. With a 4-2-1 record, he needs a good deck to remain in contention for top 8. Price drafted R/G in both drafts yesterday, and shows a high inclination towards the beatdown.

The first pack goes decently as he starts with a Roar of the Wurm. Price is given several chances to delve into Black, with a Morbid Hunger, Crypt Keeper and Skeletal Scrying, but stays firm in mono Green. He seems to want to force Red, but with only a reckless charge and seeing no other good Red cards from the right it may not be the best of ideas. He also shows how high he values Muscle Burst by taking it over the board controlling Nantuko Disciple.

The second pack does not offer Price any bomb quality cards, so he settles for another Muscle Burst. At this point, Price doesn't have many creatures, and none that are aggressive (1-2 casting cost), so the Muscle Burst seems like an interesting choice for an aggressive deck. The key color decision point comes in pack 4 where Price must choose between Red and Blue for his second color. Price decides that Reckless Charge, Flameburst, and Lithatog are better than Repel, Escape Artist and Balashan Griffin/ Psionic Gift. Once again the second pack is weak on creatures.

With a 7 person table, Price is will get at least one win with a bye. Unless it happens the first round, however, a bye would not be a good sign for his top 8 hopes. Slow R/G decks generally do not fare well without bombs to back it up. He also lacks Tier 1 Green creatures such as Wild Mongrel, Springing Tiger, Rabid Elephant, Gorilla Titan etc. Price is optimistic though and hopes for at least a 2-2 record for this draft.