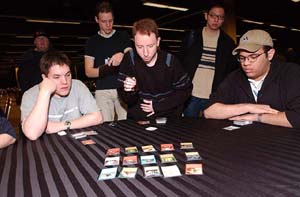 Table one on day two generally features quite a number of name players. Today was no different, with Kai Budde, Eugene Harvey, Osyp Lebedowicz, Joseph Crosby and Alexander Witt all finding themselves at the top table. Kai was in seat number one, with Eugene behind him in seat two, and followed by Osyp, Stefan Fries, Derek Bruneau, Joseph Crosby, Alexander Witt and Fabio Reinhardt in seat eight.

From the first booster, Kai got a Lavamancer's Skill, signaling a preference for U-R. Eugene picked up a Wirewood Savage, looking to go B-G behind Kai, and Osyp took a Mistform Dreamer. Stefan took a Barkhide Mauler, Derek a Swat, Joseph a Foothill Guide signaling he wanted the white, and Alex took an aggressive pick by taking a Riptide Biologist – signaling he was willing to be the third blue mage on the table. Fabio wheeled a Headhunter and an Aphetto Dredging to show he was going to be black.

Eugene's booster contained a Lightning Rift – a much-coveted pick by the pros, but he was in no position to take it in-between Kai and Osyp. He took the Primal Boost from it and Osyp picked up the Rift. Stefan took a Prowling Pangolin, Derek a Skirk Commando and Joseph took the Gustcloak Harrier from there. Alex took a Gratuitous Violence, shipping Fabio a Severed Legion and a Vitality Charm. Kai wheeled a Slipstream Eel.

In booster three it was time for the first rare bomb to hit the table. Osyp opened a Starstorm and took it immediately, Stefan took a Venomspout Brackus, Derek took a Schreeching Buzzard, Joseph took a Shepherd of Rot as the third black player in a row. Alex took a Wirewood Savage here over a Barkhide Mauler, probably much to the disliking of Fabio next to him. Kai picked up a Lonely Sandbar and Slipstream Eel, while Eugene wheeled himself into W-G with a Piety Charm and Righteous Cause. After three boosters the colors were divided.

All of them would stick to their colors for the remainder of the draft, so it pretty much entered Sealed Deck mode from now on. Interesting is to see that there were only two white players at the table, and that there were three black players in a row. This would've put Eugene in an excellent position to draft B-W but there were no black cards for him to take.

Kai would end up with 2 Lavamancers Skills, a Butcher Orgg and a Quicksilver Dragon (which came to him as a 5th pick) as key cards in his deck. Eugene picked up a Silent Specter and a Smother as a black splash for his deck and he ended up playing those, along with a Mobilization, Aven Brigadier and Improvised Armor. Osyp has the Starstorm, 2 Solar Blast, a Shock and a Sparksmith to control the board and his deck was pretty good as well. Stefan picked up fairly standard issue B-G deck with a bunch of beasts, but without a Husk, Dirge or Cruel Revival. Derek got a 2nd pick Rorix in the draft and he got a load of removal to go with it. Joseph ended up with 2 Pacifisms, a Husk, Death Pulse, Gluttonous Zombie and a Dirge of the Dead. Alex stuck to his R-G plan and has 2 Snarling Undoraks, a bunch of other beasts, about five removal, a Sparksmith and a Wirewood Savage. Fabio had a B-G deck with Mythic Proportions, a bunch of Elvish Warriors and Wirewood Savages.

I sat down with Eugene for deck construction and he was pretty happy with how the draft went. He got a number of bombs (Mobilization, Silent Specter, Aven Brigadier) and even though he didn't get any black cards, he wasn't uncomfortable to draft W-G. He was the second white mage, which is better than the fifth black mage at a table. He expects to go 3-1 with his deck, probably losing to a quick Sparksmith at some point, but he thinks it could go 4-0 as well, and anything 2-2 or less would disappoint him. Seeing how the table drafted cooperatively all the time, it was either in the packs for the players, or it wasn't. I'd expect Kai to go 4-0 at this table, with Alex and Osyp going 3-1.