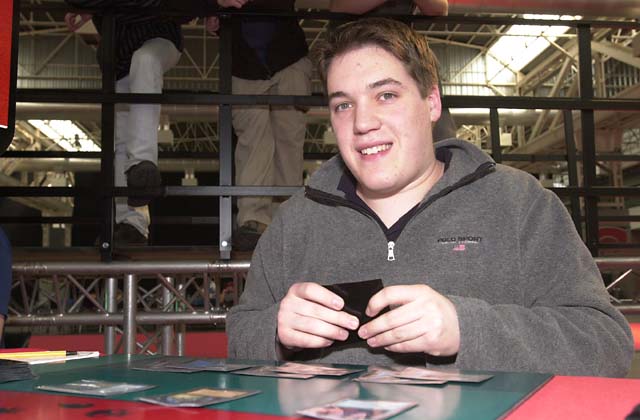 Sometimes a player can do everything right, and still end up with a poor deck. Kai Budde clearly knows how to draft - his previous tournament record and his 7-0 performance yesterday can attest to that. The draft you are about to examine, was probably one of his worst.

Budde opened a pack that would allow him to go in a variety of directions. His choices included Repulse, Stormscape Apprentice, Scorching Lava, Recoil and Teferi's Moat. Unless you sit down with a specific color preference in mind, it does not pay to take one of the U-W cards here (I am counting a Stormscape Apprentice as a U-W card, since it is not very good without white mana). Scorching Lava and Repulse are two solid picks, depending on what direction you want to be headed in. Both cards are also perfectly splashable, allowing for a flexible draft strategy.

As most pros feel blue is the stronger color, Budde went with Repulse.

His next pack had no blue cards, and he could see that Neil Reeves took a rare card (it was Urza's Rage). The two best cards in this pack were Benalish Trapper and Benalish Heralds. Budde took the Heralds. He was not entirely happy about this pick - passing Stormscape Apprentice and Benalish Trapper to Brad Swan on his left would likely put him into blue-white. When two players are drafting the same color combination next to each other, the player on the right is certainly at an advantage, but he is better off yet when not fighting for colors with either neighbor.

In the third pick it was slim pickin's. The only reasonable draft cards remaining in the pack were Nomadic Elf, Soul Burn, Recover, and Crimson Acolyte. Budde clearly considered the Acolyte, but chose to draft a black card. He took an easily splashable Recover over the mana-intensive Soul Burn.

Budde kept passing some very good green cards (such as a pair of Pincer Spiders and a Thicket Elemental). His B-U plan seemed to be working out as he picked up two Recoil and an Urborg Emissary, followed by Vodalian Serpent, Mourning, Dream Thrush and Metathran Zombie.

Second pack offered a variety of interesting options, including a Do or Die. Budde drafted an Exclude - a first pick that is hard to argue with regardless of what else is in the pack.

His second pack was quite poor. The only possible choice for him was a Cursed Flesh. In pack three, he chose to draft Soul Burn over Collective Restraint, and in pack four a Ravenous Rat over Dream Thrush and Hypnotic Cloud.

These cards, while playable, are hardly worthy of picks 2-4. He also did not miscalculate with his color choices - at this point both of his neighbors were drafting green-white (though Swan may have been playing blue also). The packs just did not work out for Budde as they were very thin on quality B-U cards.

Things got a little better for Budde over the next two packs, as he picked up a Tower Drake and Stormscape Apprentice, solidifying his plan of splashing white. The rest of pack 2 was very mediocre, with Budde picking up a pair of Urborg Phantoms and a Darigaaz's Attendant as the only other playable cards there.

Packs seemed to be mocking Budde. The Planeshift pack he opened had say, Death Bomb and Phyrexian Bloodstock as the only viable choices. No Harpy, Hunting Drake, or Dromar's Charm. He picked a Bloodstock, and then another, passing a Terminate and another Death Bomb to the left.

In the third pack Budde finally got a Hunting Drake, passing another Terminate, and in the fourth pack he was happy to see a Marsh Crocodile. He took Bog Down over Nightscape Familiar next, but had no viable picks and ended up counterdrafting a Horned Kavu in pack six.

The cards Budde kept picking up from than on remained mediocre. He drafted Allied Strategies, Stormscape Familiar, a pair of Morgue Toad, Arctic Merfolk and Sinister Strength.

Despite ending up with a mediocre deck, Budde did extremely well in the four matches that followed. He barely avoided losing in the first round against Dan Clegg, where the time limit forced a draw, then went on to win the next three matches for the total of 3-0-1. That left Budde at the top of the standings with an overall record of 10-0-1.