This draft table was nuts: 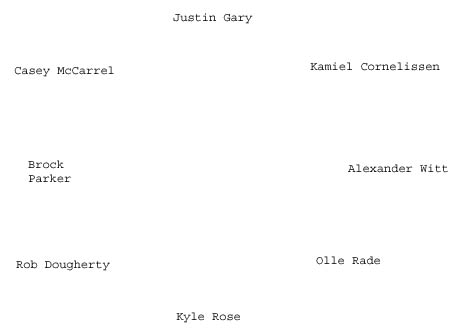 Kyle Rose had come into this tournament on the back of his Top 8 finish in L.A. looking for a repeat performance, but it was going to be tough running on this table with a 5-2 record. To his right and left Rade and Dougherty were both two famous names in the game, with the former beginning to show signs of a resurgence in the last few months.

I was interested to see if Rade's well-known preference for blue cards would affect Kyle's choices.

Nightscape Apprentice, Faerie Squadron, Explosive Growth, Zap, Sparring Golem - and the Apprentice is pushing it! This really was a shocking booster, and it was no surprise to see Kyle take the Faerie Squadron, although some people dislike taking a blue card from the first pack. It came as no shock to find Rade taking a Glimmering Angel - a card that is only really a good card in a blue deck. Dougherty had more luck when he ripped open a Breath of Darigaaz.

Plague Spores, Kavu Chameleon, Mourning, Kavu Climber, Recover, Yavimaya Barbarian, Duskwalker. Despite having taken the Squadron, Kyle took the Chameleon. I asked him about this and what he thought Rade had taken, but his simple explanation was that he liked drafting green cards and he would rather that than go into black. Most of the other Pro Tour players would have taken the Duskwalker as it was in adjoining colours to his Squadron. As luck would have it, Rade's booster supplied nothing in either white or blue, so the Swede took a Kavu Climber whilst Rob took a Zap. 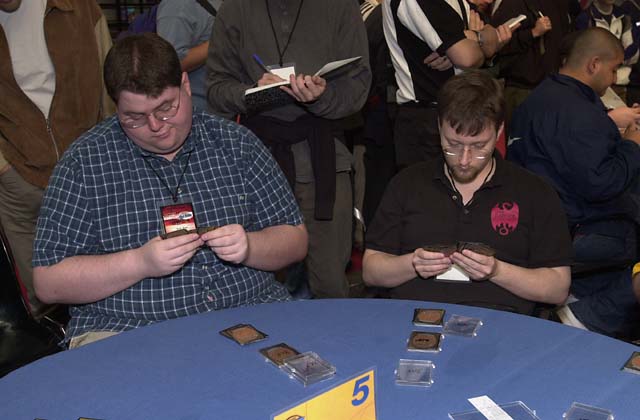 Kyle Rose and Rob Dougherty study their next picks

Explosive Growth, Recoil, Fires of Yavimaya, Opt, Yavimaya Barbarian. Seeing that there were three playable cards in green, Kyle then decided that maybe black was the right choice and took the Recoil whilst Rade was relieved to get a Galina's Knight and Dougherty picked up a Plague Spores.

Kavu Aggressor, Cursed Flesh, Recover, Sunscape Apprentice. Rose must have cringed when he saw this pile as in desperation he moved colours once more into red, taking the Kavu Aggressor over the Recover. Olle swiped a Shoreline Raider and Rob took the Fires, but he may well not play it in the end.

Metathran Aerostat, Rogue Kavu, Thunderscape Apprentice. I suppose that at this stage his Squadron was the best card in his set, so he took the Aerostat over the Rogue Kavu and hoped that he might now be able to stick to black-blue. Rade: Angelic Shield; Dougherty: Recover.

Sulfur Vent, Shivan Zombie, Obsidian Acolyte. Well, I guess his hopes of blue/black were dashed here so he took the Shivan Zombie and resigned himself to being a dodgy mana-base three colour mage. Rade: Tower Drake; Dougherty: Mourning.

He then managed to pick up a Kavu Scout and a Sulphur Vent for the rest of this set.

This is how the colours varied around the table after the first set of boosters: So there were three red-black players in a row and a total of five at the table although four of them were playing a third colour. From this positioning, one can imagine that Alexander Witt would end up with an insane white-green deck and that Olle Rade, with four blue picks to his right would also end up strong. On the downside Rob Dougherty, despite opening well, well stuck in the middle of the r-b and might not do too well as he was not playing a third color.

Plague Spores, Exclude, Kavu Monarch, Urborg Drake, Ravenous Rats. Figuring that his mana-base was going to look reasonably dodgy at this stage, Kyle began to take the most powerful cards and hope for good mana draws - he took the Exclude. Rob once again cracked open a Breath of Darigaaz!

The rest of this set did not go great for the Virginian as the best black or red cards were being swept up by Brock and Rob, although Dougherty was taking the occasional Barbarian which allowed a Maniacal Rage to slip through. Maybe Rob was going to play a couple of green cards after all?

Magma Burst, Phyrexian Bloodstock, Voice of All, Lava Zombie. - He obviously took the Burst here, whilst Olle took a Rushing River. I will list Rade's picks at the end of this set.

Kyle took Allied Strategies over Sinister Strength, Confound and Cavern Harpy. This confused me somewhat as I think that Cavern Harpy might well have been the better card in his deck, but Kyle's a good drafter and I'm willing to give him the benefit of the doubt.

Cavern Harpy. This is a great 5th pick card.

Shifting Sky over Sinister Strength. - I did not have time to ask him about this one.

Sleeping Potion. The rest of the boosters held nothing.

As far as I can make out Kyle is probably going to go 2-2 or 1-3 with this collection of cards, and on discussion with many players they voice a great number of objections to some of the picks that were made (although the benefit of hindsight should always be considered.) Having said this, if Kyle does better than 1-3 it will just show us that his play-skill and drawing capabilities continue to prove why he is such a force in the Magic community.