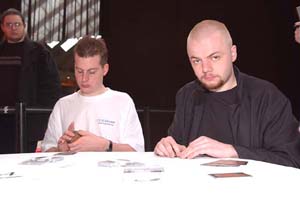 Nicolai Herzog has quite the resume. The former European Champion and Norwegian Champion also has a Top 8 at Worlds under his belt, two Team Masters appearances, and was a Team Finalist last year at Worlds in Toronto. He is looking to add another Top 8 to his name at the end of today. The first step in that direction was this morning's 9am draft, and he was being fed by the Dutch Wunderkind Kamiel Cornelissen.

The first pack presented Cursed Monstrosity, Chainflinger, Aven Fisher and Krosan Archer. Herzog took the Chainflinger, and then got a second pick Repel over Barbarian Lunatic, Dusk Imp, and Stone-Tongue Basilisk. This was a bit odd, because players usually try to avoid blue/red. Barbarian Lunatic followed, and Herzog was well on his way to building a solid blue/red aggro deck with AEther Burst, Reckless Charge, and Demoralize. However, Second Thoughts made its way into the deck seventh pick, and an Aven Archer Herzog opened came back ninth. Meanwhile, Cornellisen was solid into black/green, with Ghastly Demise, Skeletal Scrying, Springing Tiger, Seton's Desire, and a pair of Millikins to fuel it all.

While the first pack provided some decent cards, it was nothing special. Plus, Herzog's colors were a bit scattered, but it seemed he would stick with the blue/red aggro plan, and splash white. In the second pack, things went from solid to incredible. He started off by opening Upheaval, got passed Concentrate, and took a third pick Nomad Decoy. Fourth pick he took Ember Beast over Scrivener, and a surprising fifth pick Repel. Sixth pick provided a second AEther Burst, and Herzog held his head in his hands, and was obviously very angry that he had taken the Ember Beast over the Scrivener now that he had a pair of AEther Bursts. Another present came around in the form of a second Nomad Decoy seventh pick.

(As soon as I sit down at the table, Herzog starts talking about taking the Ember Beast over the Scrivener)

Herzog: Let me just explain the Ember Beast incident. I had five or six red cards, two white and two blue. I had Repel and AEther Burst, which are undeniably good with Scrivener, but it still looked like I wasn't getting the white. I thought I would have to splash the little white I had like Second Thoughts and Nomad Decoy, and play red/blue. Ember Beast is very, very important in red/blue and I didn't have that many instants for Scrivener at the time. And of course, a second Repel and AEther Burst came, so now this (Ember Beast) is in my board.

Sideboard: I think the pick made sense at the time, but obviously you didn't know that all that insane white was going to come. That Nomad Decoy came seventh pick...but why did you decide to go red/blue so early? You first picked Chainflinger and second picked Repel, and most players avoid that color combination.
Herzog: I wasn't trying to go red/blue, I was trying to go white/blue, splash red, or something splash Chainflinger. 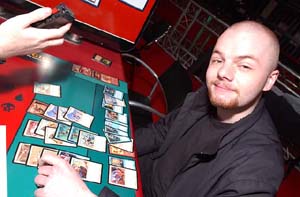 Sideboard: Right, because Chainflinger takes care of all of the problem cards.
Herzog: Yes, exactly. And, the pack didn't give me much choice. It seemed like there was no other real choices. I was still hoping for a very long time to go blue/white, splash red, which somehow turned out to be the...(laughs) it turned out good! Look at this! I should win! I wasn't expecting this, like everything was going so poorly the first pack.

Sideboard: Yeah, and everything got so much better in the second pack. You opened up Upheaval, got passed Concentrate, a really late Repel...
Herzog: Everything worked out all right! I'm happy with the results. I can't believe it happened. Apparently there was no white in the packs...

Sideboard: In the first pack you mean.
Herzog: Right, obviously. It looked really bad for a long time and it turned out fine. I'm really happy I didn't have to go blue/red. It was a tough draft. It was hard to predict what was going to happen. I think the card pool...I can't decide if it was strong or just the usual...I did pass the Mutilate, that was scary.

Sideboard: Well, you have no choice there.
Herzog: Of course, I have to pass the Mutilate. There's no other way.