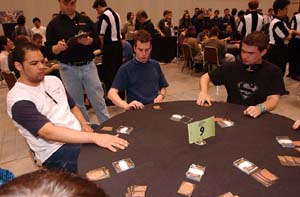 It was not too long ago that Kamiel was being heralded as the next Jon Finkel. While his star has been falling recently, Osyp Lebedowicz has been the Next Big Thing. Oddly enough, if Jon posts back-to-back Limited Top 8's he will be the next Jon Finkel, which could herald the collapse of time and space. Brian Kibler has remained one of the games most consistent performers. While he has not done tremendously well at Pro Tours—he has one Top 8 and multiple top 16's to be fair—he has always done well and has dominated the US Grand Prix circuit. In 2002 he made Top 8 in all but one Grand Prix he played in and recently won Grand Prix Boston in this very format.

These three players sat next to each other as everyone prepared to begin the first draft of Day 2. Osyp was on the far right feeding Kamiel who was feeding Kibler in turn. Osyp's first pack offered him a choice between Shock and Stag Beetle and of course he took the former. Kamiel's pick was Goblin Sharpshooter—drafting red behind red—over Nantuko Husk, Avarax, Glory Seeker, Snarling Undurak and an Akroma's Blessing—more on that card soon! Brian Kibler made what some later called a controversial pick. In an otherwise weak pack that only offered Skirk Commando and Searing Flesh as possible picks, Brian took the oft-ignored Battlefield Medic.

In the next pack Osyp toyed with the idea of R/W with a second pick Improvised Armor passing up the B/R option and shipping a Nantuko Husk. Kamiel snapped up the Stag Beetle and Kibler took another surprising pick in Akroma's Blessing while there was still Husk, Snarling Undurak, and Glory Seeker in the pack. 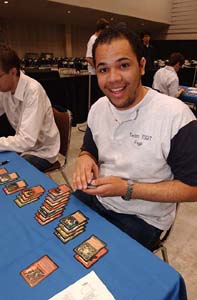 Osyp quickly abandoned white when he found Krosan Tusker and Symbiotic Beast staring at him third pick. After some thought he took the 4/4. Kamiel sensed red was not forthcoming and dipped a toe into black for Nantuko Husk. Kibler also started taking black cards with a Fallen Cleric.

The three experienced players read the table pretty quickly and had settled into their colors. Osyp was solidly R/G by the end of the pack with a reasonable assortment of Elves and Beasts. Kamiel was G/B with monsters and few spells—fortunately the all-important Dirge of Dread was one of them. Kibler's deck seemed to unfold beautifully from the first pick. Of the three of them he was the only one that had any picks past the 8th card with Daru Healers, Fallen Clerics and even a Profane Prayers coming to him the second time around.

Both Osyp and Kamiel took Elvish Warrior with their first pick; Kibler took a Cruel Revival with enough authority that it turned heads. He deliberated for as much time as allowed between Battlefield Medic and Grinning Demon and ultimately took the rare. Kamiel took a Tusker and Osyp toyed with the idea of Voice of the Woods but shipped it in favor of a Skirk Commando. He took his second Commando over the larger Snapping Thrag. Behind him, Kamiel took a Wirewood Herald and Kibler decided to take a Daru Lancer over Crude Rampart. His next couple of picks included Blackmail, Crown of Suspicion and another Battlefield Medic. The Crude Rampart he passed early came all the way around. Kamiel got a Wellwisher on the second pass allowing Osyp to pick up the Voice of the Woods he thought about earlier. 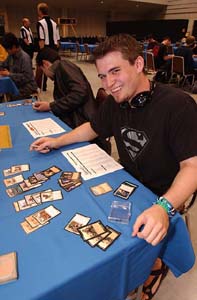 Kibler's deck remained locked in after pack two with Cruel Revival, Daru Lancer and Grinning Demon being among the few non-cleric cards that would make his deck. Osyp's deck was R/G with few spells. He had multiple Skirk Commandos and Searing Flesh that he picked up this pack. Voice of the Woods was threatening to make the deck with 8 elves 2/3 of the way through. Kamiel picked up some fatties. The most important card he may have nabbed this time was Wellwisher, which could give him the time he needs to find his game-breaking Dirge of Dread.

Osyp had a no-brainer with a Timberwatch Elves on top of his final pack. He had to remind himself to look at the rest of the cards before he layed them down for Kamiel. Kamiel was also picking an elf—the less impressive but solid Stonewood Invoker. Kibler had a Swooping Talon ready for his pile when he saw a Vile Deacon lurking near the back. Osyp took a Krosine Vorine while Kamiel happily took his first solid removal spell—Crown of Suspicion was his only other—of the draft in Skinthiner. Kibler seemed pleased with his selection of Whipgrass Entangler. Osyp's deck got multiple Goblin "The Moat" Clearcutters and a Gempalm Incinerator to round out his deck. Kamiel had sloppy seconds on green cards and ended up with such hits as Primal Whisperer and Patron of the Wild but found none of the staple beasts were coming his way. Kibler was in heaven with choice picks all the way through including a late Akroma's Devoted, multiple Starlight Invokers and another Vile Deacon that came 7th or 8th.

Brian was very happy with his deck and had his eye on B/W clerics coming into the draft, "Why else would I first pick Battlefield Medic!?! I was seriously considering taking another one over the Grinning Demon." Bob Maher who was smashed by the archetype yesterday nodded in agreement, "It's not unreasonable!" 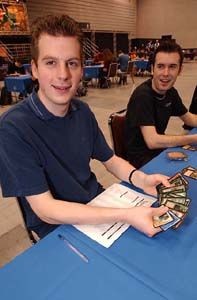 Osyp opted not to run the Voice of the Woods main deck. He held it up as he cut it from his deck, "Game 2 against U/W watch out though!" He only has two spells, his first pick Shock and a Searing Flesh. "My favorite cheap win!" Gempalm Incinerator is essentially a spell and his two Skirk Commandoes and a Krosine Vorine can wreak their fair share of havoc with a Timberwatch Elf and his eight or nine cousins.

Kamiel decided not to forgo his overall first pick Goblin Sharpshooter and is running two Mountains and the Krosan Tusker to help find one. His only spells are a Crown of Suspicion and a Dirge of Dread, which he will need to break through. He has no evasion to speak of and little in the way of fight to pound through on the ground. His deck is pretty quick with all but two spells in his deck needing more than three mana to be used—Needleshot Gourna and Stag Beetle. Three cycling lands should help him dig for the crucial Dirge.