Phoenix Foundation, the Kai Budde-led defending team PT champs, have to win out in order to make the Top 4. In their way stands a team called www.mtgplanet.com, made up of US Nationals Top 8 competitor Blake Quelle and his friends Rory Draxler and Matt Sperling.

Budde opened the first pack and went right into green with a Muscle Burst and Blume took Chainflinger. 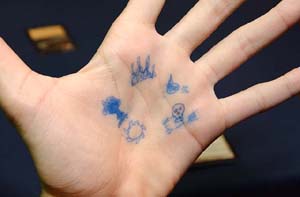 Sperling had some interesting tech when it came to signaling colors: he had the mana symbols (or at least crude attempts at them) drawn on his palm in ballpoint pen. He and his teammates would point at the symbols to convey what colors to draft.

Mtgplanet had a plan and they stuck to it. Red/black in A, blue/white in B, and blue/green in C. They obviously had experience with those combinations, evident mostly in Quelle's picks of Seton's Desire over Nantuko Disciple due to it's threshold capabilities, and later Repel over Treetop Sentinel for tempo purposes.

Sperling was loading up on defensive and utility creatures like Cephalid Looter and Nomad Decoy, so Budde went right after him by drafting a Chainflinger and two Psionic Gifts. Budde had cards of three colors (green, red, blue), but he tends to do that a lot, opting for power over consistency. He's quite capable of building a proper mana base for whatever he needs to play.

Blume had the option to take a second Chainflinger early but opted instead for Bomb Squad, which should end up being quite good against Quelle's blue/green, which is normally removal free.

Baberowski, meanwhile, was drafting his normal black/white deck with lots of removal and tricks. But things went sour for him when Draxler took two Strength of Lunacy for his red/black deck. Besides several white creatures, Baberowski took a Second Thoughts in Odyssey which can be rendered useless by a timely Strength. Draxler also got a Grotesque Hybrid in the second set of packs. 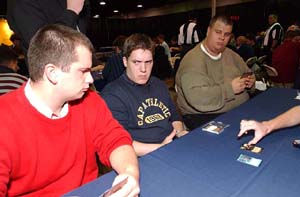 Sperling made what looked to be a bad Judgment call in the third Judgment pack. He had only an Angelic Wall and a Skywing Aven so far for flyers, and when he opened Angel of Retribution he took Deep Analysis instead and told Draxler to counterdraft the 5/5. That decision would haunt him, as he never picked up another flier for the rest of the draft!

Budde, meanwhile, was racking up the fliers – Skywing Aven, Hydromorph Gull, and Ghostly Wings. He also took a Breakthrough which should be huge.

At the end of Torment, Budde opened a Balshan Collaborator which he suggested Baberowski take. The A player did so, going into three colors. He ended up taking a few more blue cards in Judgment, like Aven Fogbringer, Mirror Wall, and Sccalpelexis, which should give him a little more breathing room when it comes to getting wrecked by Strength of Lunacy. 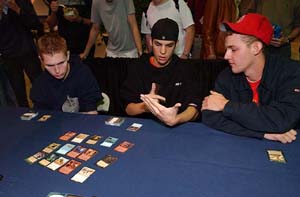 Quelle's deck continued to get better and better, as he added a Wonder and a Grizzly Fate to his pile. Mtgplanet did have to ship a Fledgling Dragon to Blume, giving his a much-needed weapon.

Budde ended up with a Wormfang Drake and two Sudden Strenths (which combo well with the late Mirari he took in Odyssey).

After they built their decks, both teams agreed that Budde will smash Sperling, but the "wing" matches are not in Phoenix Foundation's favor. The shift into blue should give Dirk an okay shot against Draxler, but Quelle's deck is terrific against Blume.

Phoenix Foundation should lose this match, but they've won before against worse odds.