Pro Tour Rochester drafters are a stubborn bunch, and that stubbornness manifested itself in a big way on table 3 of the first draft of day 2. The culprits: 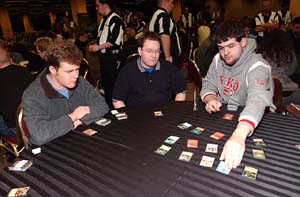 Invitational winner Thoren said going in that his goal was to be either red-blue or green-black based on his neighbor's preferences. Sitting between Rubin and Jensen, he had to have a good feeling that his neighbors would "play ball" and not try any funny business. And that was true. The problem was certainly not with any of those three.

Rubin went red right off the bat with Sparksmith, and Thoren took a Swat. At this point Thoren had to be hoping that Rubin could get a claw-hold on blue so that he could have green. Jensen took Pinpoint Avalanche third, and van Leeuwen took a Symbiotic Elf—a hallmark card of black-green—fifth. So far, so good, if you are one of those people who adhere to the alternating red-black theory.

Lee took Dive Bomber, possibly hoping to be white/red, but then Herberholz took a Spitfire Handler—with authority, no less—seeming to break the chain. Stern, a rabid red/blue drafter if there ever was one, took a Wizard, living in denial of Herberholz's previous pick. Hron rounded things out with a pair of Clerics, looking to be white black.

The astute among you can make a few assumptions that turn out to be correct. Rubin, seeing that neither Stern nor Hron have any interest in green, goes into the color. That puts Thoren in the awkward position of having to abandon his original plan and go into white. That leaves the door open for Huey to be blue-red. All true.

The rub is that van Leeuwen refused to accept fate, and instead took Embermage Goblin right behind Huey's Lavamancer's Skill in pack 2. The big man shot him the evil eye. Lee, seeing red to his left and red to his right, took a Swat in pack three, hoping his position would hold. Herberholz and Stern never budged, with Herberholz adding green to his red and Stern picking up red scraps where he could to go with his blue.

And to be honest, that was end of the positional portion of the draft. Even though van Leeuwen put himself in a bad position and Herberholz messed things up for Stern, no one budged on their color choices. That left the table with three G-R decks, three W-B decks, and two U-R decks. With the small number of archetypes at the table, everyone was fighting for the same cards, and it's had to come up with a clear winner.

Rubin looks good. He wasn't fighting with his neighbors, and he has plenty of removal. One odd thing about his deck is that lack of big creatures. He kept drafting Wirewood Savage over the Beasts that power them, and was strapped for big monsters at the end. He had to pick a Battering Craghorn over a 4th Savage near the end, and took a Centaur Glade over a second Sparksmith just to give his deck some bodies. He said later that he made that pick with the knowledge that the Smith would fall to his friend Huey, and he might not have been so generous otherwise. I say 3-1 for Ben.

Thoren's deck has a few problems, through no fault of his own. Most obvious is his small amount of removal. The black cards weren't gat in this draft, and there wasn't much he could do about it. He does have an Akroma's Vengeance that will have to come up big if he hopes to stand a chance against all the pingers out there. I predict 2-2.

Jensen was the guy who made out the best. He was one of only two blue drafters, and the other was right behind another red drafter. In addition to his two Lavamancer's Skills, he has Lightning Rift and a vast array of cycling cards. I expect a 4-0 from him.

Van Leeuwen has lots of green fatties, including Ravenous Baloth, but very little in the way of spells. The fatties will give him a match, but not more than one. 1-3.

Lee was another victim of the lack of good black cards. He has a few nice ones, like Prowling Pangolin and Cruel Revival, but his deck also sports many Daru Cavaliers and other iffy cards. 2-2.

Herberholz was in a fight, and complicated things with some sketchy picks, like Pinpoint Avalanche over Solar Blast. He'll need to win with Wave of Indifference if he's going to win at all. 1-3.

Stern's deck looked like it might have come together at the last minute, but it is still missing too many key components to be considered a good red-blue deck. His red spells are few and far between, and blue by itself isn't great. 1-3.

Hron has a nice Cleric deck, with three Doubtless Ones, many Dirge of Dreads, and a Cover of Darkness. Some decks won't be able to handle that. 2-2.