When we left yesterday's action, Denmark's Svend Geertsen (Remember Senor Stompy? Yeah, him.) was defeating Kai Budde to end the day as one of only three players with perfect 7-0 records.

Today he finds himself drafting at Table 1, and on his right is American Brian Davis. (The times, they are a-changin'. There are two Americans at the top table, and both are from Tennessee. Somewhere, Craig Wescoe is smiling.)

Svend opened a rather "blah" first pack; none of the cards were great other than Wayward Angel, which he took. He later admitted to not liking white, so he was quite uncomfortable picking the Angel first. 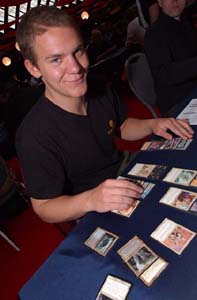 Davis took a Repel and passed a Psychatog and a Second Thoughts. Davis claimed he took the Repel to keep his options open, but the Psychatog is good enough that by passing it, he almost guaranteed a fight for blue. If Svend could have peered into the future, he would have take Second Thoughts. But instead he took the more powerful 'Tog, showing a willingness to abandon white immediately.

Now, not only had Davis taken a blue card first, but Mikko passed him a Shadowmage Infiltrator, opting for a mediocre green card instead for signaling purposes. So just as Svend was picking Psychatog, Davis was taking a

creature of his own.

Davis's draft went smoothly from there; he took Painbringer, Aven Windreader, Predict, and Dusk Imp. But Svend's dislike of white was making waves farther down.

Third pack, Svend chose Afflict over Aven Cloudchaser (a good pick), then Dusk Imp over Second Thoughts from a pack with no playable blue cards. Then he had to choose between Syncopate and Divine Sacrament. Sacrament would not have worked well for Svend based on the cards he had, but passing it sends a strong signal that you are not white.

The sixth pack made him change his mind: Lieutenant Kirtar, Second Thoughts, Patrol Hound, and Darkwater Egg. He shrugged and took Kirtar, assuming that no one on his right was white. The problem was that he had sent the same signal himself earlier. Svend rounded out the pack with a Shelter, a Kirtar's Desire, and an Auramancer. If only he hadn't taken the Psychatog!

What was happening downstream? Skjetne was firmly black/red, but even he couldn't believe the amount of white being passed early; he counterdrafted the Patrol Hound. Terry Tsang was having a hard time deciding on colors – he had drafted everything but black – but when the Sacrament landed in his lap 8th, he was sure no one on his right was white. Unfortunately Boileau, who was looking to be blue/green initially, came to the same conclusion when he picked up the Cloudchaser and one of the Second Thoughts really late.

Svend started out with a Shelter in the first pack going the other way; the only other good card in the pack was Kamahl, Pit Fighter. Davis took a Painbringer first, and gave Kamahl a long look before settling on Crypt Creeper second. (The Kamahl went to Kai fourth, joining the other Kamahl that he took first overall.) Again Davis's draft went really smoothly: Aether Burst, Aether Burst, Skeletal Scrying, Syncopate, Dreamwinder, Sadistic Hypnotist, Frightcrawler. We'll leave him alone and look at Svend some more.

After the Shelter, Svend took Aven Flock. Fine. But his third pack had Second Thoughts, Afflict, Aether Burst, and Peek. He took Afflict, all but guaranteeing a three-color deck. Had he been willing to give up on the Psychatog, Dusk Imp, and first Afflict, he might have been able to play two colors. Maybe.

I suppose he was willing to give up blue after the Afflict; he took Devoted Caretaker (over Dusk Imp and Skeletal Scrying), Crytp Creeper (over Syncopate), Embolden (over Dreamwinder, a great blue card), but then Syncopate over Sadistic Hypnotist. All three it is.

In Torment, Davis got a few high-quality goodies: Soul Scourge, Skywing Aven, Possessed Aven, and a sixth-pick Balshan Collaborator (Kai counterdrafted a second Collaborator with his 8th pick). Davis also nabbed 4 Obsessive Searches (he ended up playing only 2) to help him find the goods. 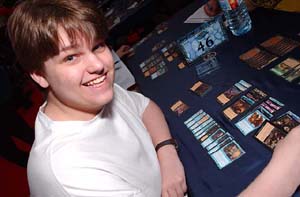 Svend was all over the place again, taking Cabal Torturer, Hydromorph Gull, and Militant Monk – double mana in all three. He got plenty of cards, but his deck is not smooth at all, and I expect him to have trouble casting everything, especially if he only plays 17 lands. Svend feels he has the tools to win, and if the draws come up right he'll be in good shape.

Davis's initial decision to pass Psychatog might have been wrong, but it didn't hurt him. His deck is full of flyers and, although it lacks removal, should be good enough for a 3-1 record. (Davis agreed, but says he'll go 2-2 because he'll screw up somehow).

What about everyone else? Tsang won the fight for white, and ended up white/red. Boileau switched back into green in the second pack with a Wild Mongrel and a Beast Attack, but a third pick Iridescent Angel kept him in white as well.

Boileau's switch into green affect Kai adversely – he ended up with two Deep Analysis and a Repel in his otherwise red/green deck.

Had Zvi Mowshowitz – or anyone else willing to draft heavy white – been sitting in Svend's chair, he would've had a great deck. But white is a tough pill to swallow sometimes, and because everyone was afraid to commit to it, no one maximized its power. Tsang comes the closest, and he could do well. Geertsen and Davis's fighting, however, should favor Davis over four rounds.