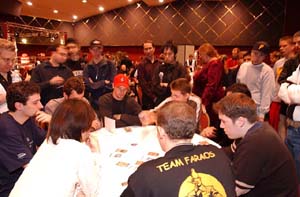 The hangers-on who barely squeezed into day two sat at the last table of the Pro Tour. Ordinarily this table would be reserved for competitors attending their first Pro Tour, or unfortunates who were on their way out of the game. Neither of those descriptions would fit the star-studded circle that made up Draft Pod 14! They sat in this order:

There would be no respite for any of these players as they sat down to draft. No quarter was given and none was asked for.

Reinhard opened with a Balshan Griffin, entrenching him in Blue. Ueda followed with a Chainflinger, and Kai snatched up an Aven Fisher. Geertsen picked a Twigwalker, and Takao scooped an Aven Cloudchaser, and Finkel chose to establish as a green mage with a Krosan Beast. Tom took the first black card of the draft (a Dusk Imp), and Fuller completed the first sweep of the table with a Leaf Dancer.

The packs progressed pretty smoothly, with each of the players settling into their colors early on. Here were the highlights of the draft for each player:

Reinhard Blech: Reinhard didn't seem to be happy with the way he draft went. He drafted a White/Blue deck with no obvious power cards. Several times in the draft he bemoaned out loud about his fortunes, as bombs in Blue were opened just to his left and right more than once.

Sunao Veda: Sunao fared better than Reinhard, picking his way to a solid Red/White deck. In the 11th pack he made the interesting choice of Kirtar's Desire over Aven Flock. Both cards are of comparable power levels, but White/Red seems to benefit more from flyers (since few of its creatures can break through a solid defense) than a Pacifism.

Kai Budde: Kai ended up with one of the better decks at the table (and this table contained many solid decks), featuring Cephalid Broker, Wild Mongrel, Overrun, and Amugaba. Kai favored picking larger green creatures (such as Stone-Tongue Basilisk and Springing Tiger) over smaller creatures (like Druid Lyrist and Cartographer). At one point, Kai had a chance to pick a Cultural Exchange (a really good card for U/G, which can often generate multiple 1/1 squirrels via Squirrel Nest or Chatter of the Squirrel), but instead decided to take a Nantuko Disciple.

Svend Geertsen: Although Black/Green isn't generally considered one of the stronger color combinations in this format, Svend seemed very comfortable drafting them together. He benefited from a 12th pack Squirrel Nest, and from the fact that there was only one other Black player at the table. In the 24th pack, he chose a Buried Alive over Screams of the Damned. Many players overlook this card, scoffing at its high casting cost and anti-threshold effect. However, it would seem that a card that duplicates the effect of Pestilence would be a lot stronger to at least have in the sideboard of a deck than a card that will never be played (the sorcery).

Higaki Takao: Higaki put together an ultra-defensive U/W deck featuring the total-board lock of Chamber of Manipulation plus Animal Boneyard. He was gifted by a 9th pick Mirari in pack 13, and the aforementioned Cultural Exchange that Kai passed on. With the lack of enchantment removal or bounce at the table, it should be interesting to see if his deck can contain some of the more aggressive decks.

Jon Finkel: Finkel has leaned towards the Red/Green beatdown strategy all weekend, and this deck proved to be no exception. His deck contained many quick beats, including a Wild Mongrel, Ember Beasts, and other two and three casting cost Red/Green creatures. He also drafted one of the two Squirrel Nests, and counterdrafted the only Dematerialize at the table. One note was how highly he drafted a pair of Moment's Peace, which would suggested he thought they might give him the edge against other aggressive decks.

Tom Van De Logt: Tom greatly benefited from being seated between two Red/Green players by drafting a very competitive Black/Blue deck. Early on he thought about going into white, but in the end decided not to compete with Reinhard and Ueda to his left, and Higaki to his right. This paid off as he received an 8th pick Painbringer in the 11th pack, complimenting his previous two picks of Caustic Tar and Stalking Bloodsucker.

Ryan Fuller: Ryan ended up with two, count em, TWO Bomb Squads. He drafted an ultra-aggressive deck featuring lower casting cost creatures. In pack 19, he made a very interesting decision, reaching for a Rites of Initiation over a Reckless Charge. It will defiantly be interesting to see how the other players deal though with a pair of Bomb Squads in a removal-light environment.