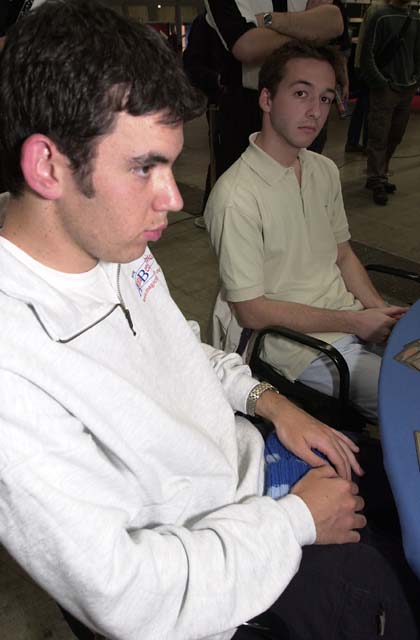 In contention for the Top 8, Bendikt Klauser sat to Chris Benafel's right at draft table 3.

Both players sped to their first picks, with Klauser taking a Probe from a pack with Shivan Zombie and Duskwalker, and Benafel taking Llanowar Knight and leaving Phyrexian Slayer, Hooded Kavu, Tsabo Tavoc and Kavu Climber. Klauser was happy to receive the Slayer.

Benafel agonoized over his second pick. The pack had Armadillo Cloak and Repulse, as well as Probe and Fires of Yavimaya. He stared at the Repulse for a long time before putting it in his pile. This was an interesting choice, as the Cloak is white-green's signature card and one of the best reasons to play the combination. Klauser took the Probe and started to smile.

Benafel got a Thornscape Master third pick, leaving Fact or Fiction for Klauser. He then took Pincer Spider over Ordered Migration and Tower Drake, trying to stay within his initial two colors, and giving the Drake to Klauser. From his next pack he took Explosive Growth over Spirit Weaver. The only card for Klauser was Soul Burn.

Now, there hadn't been many red cards of note in the first few packs, certainly no burn spells, so Benafel was shocked to find Viashino Grappler, Kavu Aggressor and Scorching Lava in a pack with Explosive Growth, Harrow and Tower Drake. He decided to heed the signal and move into red, the Lava being a fair splash card if things didn't go as planned. His next pack had Yavimaya Barbarian, and his Repulse was almost forgotten.

Klauser got his second Drake and began collecting sundries like Dream Thrush, Prohibit and Recover. Benafel spent his late picks on sac-lands, a Prison Barricade and a Sunscape Apprentice.

So at the end of pack 1, Klauser had two Probes and an impressive set of fliers, not to mention Fact or Fiction. So far he had seen no reason to deviate from blue-black. Benafel, on the other hand, had a little bit of everything. He'd squandered an early pick on a card he wouldn't use and was now turning away from green-white into green-red. Fortunately for him, he'd made no all-white picks early on.

Benafel's first pack of the second pass seemed to mock his decision, offering up a Stormscape Apprentice. He resisted the trickery and went with a Serpentine Kavu. Klauser again had an easy decision, with Spite/Malice over Phyrexian Slayer. This left Benafel to choose between Kavu Chameleon and Benalish Trapper. He took the latter.

Klauser seemed to be out of tough picks, as he was handed Fact or Fiction Number 2. After that he took Sky Weaver over Phyrexian Slayer, and collected a pair of Ravenous Rats. That's when the packs ran out of blue and black cards of worth. He took Prison Barricade and Ardent Soldier just in case.

Benafel's river stopped flowing well before that. He continued to spread his colors, taking another Barbarian and being reduced to second-tier cards like Rampant Elephant and Maniacal Rage. One ray of hope hit with his eighth pick Treefolk Healer, but after that it was Irrigation Ditches as far as the eye could see.

To recap: Klauser doubled up on Probe, Fact or Fiction, Tower Drake and Ravenous Rats, and Benafel grabbed whatever white, green, and red cards he could, hoping for the best. The irony of the situation was that Planeshift's white and green are inferior to the other colors, so Benafel's situation was unlikely to improve. Klauser, already in great shape, could look forward to the goods.

This was verified as soon as Benafel cracked his final pack, taking Gerrard's Command and sending Stormscape Battlemage Klauser's way. Meanwhile Klauser made the interesting choice of Nightscape Familiar over Volcano Imp and Confound, wanting to accelerate into his powerful blue spells.

Somehow Benafel managed to hang on. He had second and third pick Gaea's Mights, an Amphibious Kavu and a Stone Kavu, followed by an Aurora Griffin. Klauser continued to live right with Cavern Harpy, but strayed into red for Terminate and Lava Zombie. He rounded things out with a pair of Snidds, a Confound and a Bog Down. Benafel rounded things out with two Stratadons.

Klauser chose to run his two red-black cards maindeck, because he felt that he needed to turn the card advantage he expected into action cards, rather than things like Prohibit and Bog Down. He even left Confound in the sideboard because he wanted to keep an offensive stance in the first game.

As I walked over to Benafel's table, he looked at me and said "Well, my deck is terrible, but what am I going to do? I'm going to play Stratadons! Why? Because they're Stratadons!" This all turned out to be idle chatter, as he built a sane deck instead. He said that he chose Repulse over Cloak because he wanted to draft white-green-blue, and that Repulse is an incredible card, "Ten times better than Cloak". He felt that he couldn't make up his mind to commit to a color set, ignoring blue cards in favor of white and green ones, and that his deck suffered as a result.