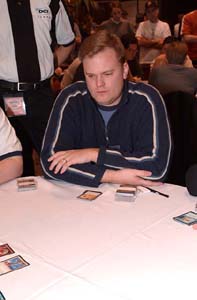 Many players consider Don Gallitz to be the best player to never make a Top 8. In fact, he has more Pro Tour points and has appeared at more Pro Tours than any other player who has not made Top 8. For the last draft of the swiss portion of Pro Tour San Diego, he found himself in position to make a run at Top 8, with a 2-1 record necessary to play in front of the cameras for the first time in his Magic career.

Gallitz was in the third seat for this draft. Dan Clegg took Morbid Hunger as a first pick, and Jens Thoren drafted Crashing Centaur. Gallitz then took Aether Burst, which was the only blue card in the pack. Jeff Cunningham, who was being fed by Gallitz, first picked Second Thoughts. In the second pack, Thoren first picked Werebear, and Gallitz took Shelter. This was surprising, since Cunningham had taken Second Thoughts in the previous pack. It is very possible that Gallitz was looking to force Cunningham out of white early. This left Cunningham to fourth pick Skeletal Scrying.

Gallitz opened the next pack, which was definitely the turning point for him during the draft. His possible picks were Aven Windreader or Aether Burst, and Gallitz decided to take a second Aether Burst. Cunningham then took Aven Windreader, going into blue. Was this retaliation on the part of Cunningham? After all, Gallitz had tried to force him out of a color, and now Cunningham was going into blue, cutting off Gallitz. This proved to be the most important decision of the draft, because Cunningham ended up with a lot of solid blue picks, while Gallitz's deck isn't close to good when compared to the rest of the table.

If Gallitz had not taken away Shelter from Cunningham second pick, and/or taken Windreader over Aether Burst, he may have been able to keep Cunningham cooperative and out of blue, which would have been very beneficial for him. As is, his deck will have a hard time with other decks at the table, such as Jens Thoren's' double Shower of Coals wrecking ball. I sat down with Gallitz after the draft to discuss his thoughts on how it went.

Sideboard: How do you think the draft went?
Gallitz: I did not feel that it was in my favor, but we'll see.

Sideboard: Any reasons why? Do you think something specific went wrong?
Gallitz: (Jeff Cunningham) on my left was fighting for blue, and I tried to fight him. I had taken two Aether Bursts in the first two picks...(what he did) didn't seem conducive to the draft, but he ended up with a really good deck.

Sideboard: He took a Second Thoughts first pick, and you took Aether Burst. Then, you took Shelter, going into his color. It seemed that in retaliation, he took the Windreader, which is a blue card.
Gallitz: It's possible that he did that, but my philosophy in Rochester Draft is that you should always own the person to your left. I should be able to control what he drafts. I tried to get him into black/green or something like that, and it didn't happen.

Sideboard: So was your idea "I can take this Shelter and he'll go out of white"?
Gallitz: I didn't mind if he took white on my backside, because I wanted to keep him out of blue. There wasn't a blue card for me to take in that pack, so I figured I'll get the blue on the way back if he's taking white. Dan Clegg going black/white was also unexpected.

Sideboard: For your third pick, you took a second Aether Burst over a Windreader. Why?
Gallitz: My whole deck is Scrivener/Aether Burst. I hoped to get a Scrivener later, and the more Aether Bursts I take early on, the better chance I can get another one later, which is absolutely broken.

Sideboard: Do you think that if you would have taken Windreader and passed the Burst that Cunningham would not have gone into blue?
Gallitz: No, I don't think so. I'm not sure.

Sideboard: Because that's when he shifted.
Gallitz: I think he was set on drafting black/blue. He took a Moment's Peace, but it quickly became obvious that is the deck he's most comfortable drafting.

Sideboard: You took Kirtar's Desire over Shelter at one point. Why?
Gallitz: I don't have a lot of early drops and there's Mongrels at the table, so that's kind of like my anti-Mongrel card. Shelter is probably better overall, but I have to do something early in the game.

Sideboard: What do you think about your chances at the table?
Gallitz: I don't have any of the power cards everyone else has. Some really powerful cards came up, and I was not the one to get them. I put my chances at going 2-1, which is what I need for Top 8 at 35%

Sideboard: Anything else?
Gallitz: I'll do my best. We'll see what happens.