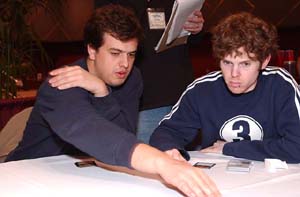 Playing fair will get you far in Rochester Draft, as the format is all about politics. But when push comes to shove, and Top 8 is on the line, people tend to do crazy things.

Frederico Bastos, however, prefers to play by the book. At a table full of desperate, crafty souls, Bastos decided to stick to proper protocol and see if it works.

A formal Portuguese National Champion and a veteran of the Top 8 at Pro Tour - Tokyo, Bastos came into the final draft in third place, needing only a single win in order to make the Top 8. As the table settled in, Neil Reeves in seat five committed to red/green, and the French rookie Farid Meraghni went into blue/white. Italian Gionata Dal Farra was sticking to just black in seat seven, so Bastos took his chances on red/green in seat 8. Dan Clegg in seat 1 went into black/white right away and stayed there.

The first bump for Bastos came when Dal Farra decided to take a Metamorphic Wurm high, setting himself up for black/green. Bastos slumped, but took a Krosan Archer and stayed the path. Luckily, Dal Farra picked up a Syncopate, Aven Windreader, and Repel shortly thereafter, and decided to fight with Meraghni for blue as opposed to with Bastos for green.

The second bump for Bastos came when Clegg started counterdrafting Reckless Charges and Blazing Salvos. Clegg knew that Bastos would be his first opponent, and did not relish the thought of facing a barrage of Reckless Charges, so he would almost always pick them if the white or black cards were not high quality. After the third such counterdraft by Clegg, Bastos's jaw dropped and he looked the American right in the eye, as if demanding some sort of explanation. Clegg merely shrugged.

The third problem came during the second round of packs when Meraghni decided to start hating Reeves, and switched into green. Those two would also be first-round opponents, and Reeves was furious at the Frenchman's audacity. The move also directly affected Bastos, since now a fourth person would be picking green cards.

Bastos was always a gentleman, never counterdrafting Clegg back, and never moving out of his colors. Compared to the Meraghni/Reeves interaction, or the fighting that was going on across the table between Don Gallitz and Jeff Cunningham, and you have to wonder if Bastos is ruthless enough to come out on top in these high-pressure situations.

He seems to think that ruthlessness isn't necessary at this point. "I only need one win," said the Iberian, "I'm playing Clegg first, and I hope to get it there." One gets the feeling that even of he loses to Clegg, Bastos will simply take it in stride and try again against his next opponent.

Maybe this time the cooler head will prevail.

1 Firebolt 2 Chatter of the Squirrel 1 Rites of Spring