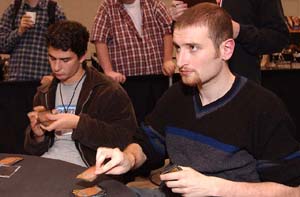 Don't call it a comeback? At this point, the story practically writes itself anyway. Thanks to Kai Budde's unbelievable accomplishments, Jon Finkel is firmly connected to his "Second best player of all time" label. Finkel even lost to Kai in the Semifinals of Pro Tour Chicago, but to be fair Kai had a much better deck.

Jon showed up to Yokohama in typical form, not having had much practice but ready to let his exceptional talent carry him to success. This time around, Kai didn't even make Day 2, while Finkel is in prime position to make Top 8 heading into the last draft. A record of 1-1-1 or better should put him into Sunday's familiar territory once again.

Finkel opened the first pack, and had to choose between Krosan Tusker, Ascending Aven, Lavamancer's Skill and Avarax. He took the Skill, essentially putting himself into blue-red unless he got cut off, or enough cards from a different color came to convince him to switch. He stayed on track second pick with Embermage Goblin, but the third pick was interesting. It contained Elvish Warrior, Festering Goblin, Gustcloak Harrier and Goblin Sledder, and Finkel took the white 2/2 flyer.

He abandoned the white plan immediately, picking up a pair of Mistform Dreamers and a Riptide Biologist in the next three picks. As the first pack came to an end, Peer Pressure came around ninth, which could be potentially devastating with his Mistform creatures. 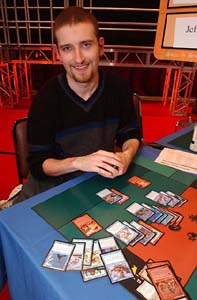 This was interesting, because Barbero to his right was green/red, and Jorstedt to his left was green/black. Because the green in Legions was so deep at this table, the green cards would go right through Finkel and to Jorstedt. For example, Barbero took Feral Throwback over Timberwatch Elf, which went right through Finkel and over to Jorstedt fifth. This is not to say that Finkel did poorly, since he got the lion's share of blue. He drafted Walls of Deceit fifth and sixth, which will combo very well with his two Skirk Commandos- his opponents would practically need to take a 50/50 chance to lose card advantage when deciding whether or not to block.

Overall, Finkel's chances at making Top 8 look good. He doesn't need a spectacular record, and he has walls to hold down the ground as well as flyers to clock his opponents. It's lacking huge bombs, but has plenty of solid spells that should be able to carry him to Sunday.