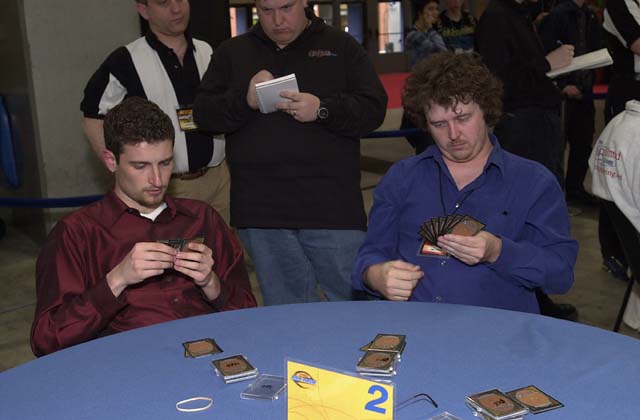 Jon Finkel already has two Top 8's this season and he'd love a third. With his 8-2-1 record going into the final draft, he was in position to do just that if he could win the table. He was feeding Alan Comer, who has been quiet in recent months but has four Pro Tour Top 8's in his career. At 9-2, Comer needs just a 2-1 record at the table 2 draft to put up Top 8 #5 and re-solidify himself on the gravy train.

Comer had won seven matches in a row when he sat down to draft and his secret was to draft green. No one else seemed to want it at his previous tables and when he saw that Finkel would be feeding him, he must have suspected he'd see green again. His first pack gave him the choice between Armadillo Cloak and Agonizing Demise. Comer went ahead and took the Demise. Even if he did wind up playing green, I think he expected to splash in the Demise.

Finkel's first pick was even harder - his pack had Benalish Heralds, Blind Seer, and Faerie Squadron. He pretty much had to draft a blue card, but he knew that Comer was also probably going to take a blue card and the next guy down the line - Darwin Kastle - might also take blue. Finkel took the Heralds and then started doing damage control with his very next pick. He took Galina's Knight over Tsabo's Decree (and Razorfoot Griffin), thus fairly screaming "go black!" to Comer. Finkel reasoned that it would be okay for them to share blue, as long as they didn't share their other color. Finkel then took Angelic Shield, passing Trench Wurm, Shivan Zombie, and Sapphire Leech.

Comer did indeed draft a blue card second (he took the Blind Seer) and then took the Decree third. After that, Comer took the Trench Wurm (and probably filed away the Shivan Zombie as evidence that black-red might be open on his right). Finkel's 4th pick was Glimmering Angel over Keldon Necropolis. Finkel couldn't really play the Necropolis without abandoning all of his blue-white cards, but Comer scooped it up and then took sixth pick Kavu Runner from the next pack. The good black and red cards just kept on coming and Comer sucked down Kavu Aggressor, Nightscape Apprentice (over Plague Spores! - no one at the top tables seems to like that card very much. The format is just too fast for it to be good, though Comer did draft the one he got passed seventh in the second set of packs), and Recover. Finkel's spell options weren't as good - all he got was two Wings of Hope - but he was very happy to pick up two Coastal Towers. Finkel drafts lands higher than most players on Tour, so getting those seventh and tenth was a nice little present for him.

While reviewing his cards, Comer counted ten playable black and red cards and then shuffled Blind Seer to the back of his pile. Finkel's damage control had worked. Jon then opened a Zanam Djinn while Alan got Shivan Emissary. Comer took Shivan Emissary over a bunch of black-blue cards second while Finkel was also staring at a pack with a bunch of black-blue cards and had no real choice but to add a third color of mana to his deck (he took Probe over Urborg Drake and picked up a pair of Recoils later in the second pack). At the same time, Finkel was dipping into black, Comer was dipping into blue because Zanam Djinn fell into his lap third. Comer and Finkel each got a lot of assorted creatures from the rest of pack 2: Glimmering Angel, two Ardent Soldiers, Shoreline Raider, Prison Barricade for Finkel while Comer sucked down Shivan Zombie, Urborg Phantom, Slimy Kavu, and Urborg Skeleton.

Comer's first pick from Planeshift was easy - Terminate - but he spent he rest of the pack trying to figure out if he was playing blue and if so, how much. He took Nightscape Battlemage second (over Caldera Kavu) but then took Slingshot Goblin over Crosis's Charm. He then took a second Nightscape Battlemage over Nightscape Familiar before rounding out his deck with Mire Kavu, Volcano Imp, Thunderscape Familiar, and Bog Down. When he sat down to actually build, Comer wound up running four islands, three black creatures that are only truly good if you pay the blue kickers, plus Zanam Djinn. Comer's card quality is outstanding and he seems to me to be a good bet to get the 2-1 he probably needs to make Top 8.

Finkel took a pair of Dromar's Charms, a Stormscape Battlemage, and spent the rest of the pack making sure his 3-color mana base was going to work, taking 4th pick Terminal Moraine and 6th pick Crosis's Catacombs, along with 7th pick Sunscape Familiar. In the end, Finkel wound up with a decent deck with lots of high toughness ground creatures and controllish elements, but only three fliers. He'll probably run both Wings of Hope and try to outplay people. His doesn't look like a 3-0 deck, but he's such an excellent pilot that I certainly wouldn't count him out.