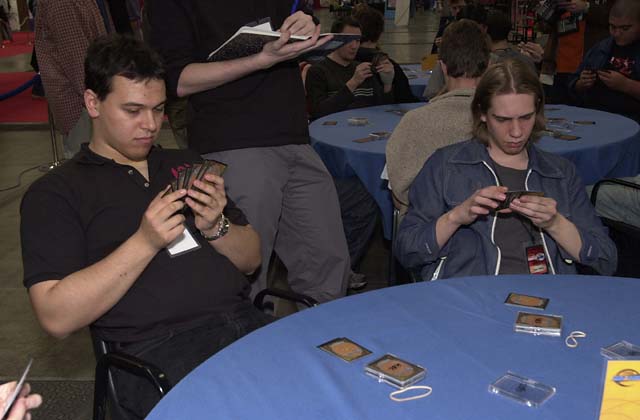 These players were seated next to each other in pod three in this final draft in the Swiss portion of PT Barcelona. With 24 points, they both had to go 3-0 to stand a chance of making the Top 8, and their tiebreakers were probably enough to guarantee them a spot if they did.

Justin was passing to Tuomo in the first Invasion booster, and the Planeshift booster, but the first few packs were not kind to them in terms of Justin being able to signal his colors to Tuomo. Justin's first pick was a Samite Archer, which he took over Thornscape Apprentice, and Stormscape Apprentice. This blue Apprentice immediately caused trouble, as Tuomo first-picked an Agonizing Demise, and then took the Stormscape.

Justin would arguably have been better served by taking the Thornscape Apprentice, as then he would have guaranteed that Tuomo would take a Blue card as his second pick and they would have colors to themselves.

Justin was passed a booster containing an Angelic Shield as the only Blue-White card, and Tuomo took a Duskwalker from this pack. Gary once again had to send confusing signals as he rather surprisingly drafted Riptide Crab over Glimmering Angel, and of course Tuomo picked the Angel.

Tuomo began to realize that his colors were being cut off somewhere to his right, and after picking another Duskwalker, he took a Viashino Grappler. Perhaps this was one pack too late to switch, as the booster with Duskwalker had also contained Armadillo Cloak, and Fires of Yavimaya. Justin continued to take U-W-B cards, with Opt, Sky Weaver, Sleeper's Robe, and Mourning his remaining playable picks from the first set of boosters.

Nieminen struggled to find his niche as he took Ordered Migration after the Grappler, then Slinking Serpent, followed by Harrow. The Harrow was a dubious choice as there was a Barrin's Unmaking in the pack as well. It may not be a very good card, but Harrow is obviously never going to fit in his deck, so it was just a wasted pick.

After the first Invasion booster, it appeared that both players were U-W-B, and Tuomo may have had to splash Red as well. The Finn opened up an Exclude and Justin opened Agonizing Demise. This time it was Justin who did not switch away from the drafted colors, as he had plenty of good Invasion cards already.

There were some nice early picks from Tuomo, Spite/Malice, Exclude, and a Stormscape Apprentice, but the picks dried up rapidly. Of course things dried up even more quickly for Justin, who got only a pair of Vodalian Zombies of note after his first pick.

Both players managed to draft enough filler quality cards like Ardent Soldier, and Hypnotic Cloud, to keep their hopes alive going into Planeshift. Gary opened a booster with Dromar's Charm, and Magma Burst. The Charm was on color but he probably thought that with a weak looking deck he needed the broken spells.

This gave Tuomo a Dromar's Charm, and he later got a Cavern Harpy. Despite Justin taking cards in the same colors as him, there was enough depth in these packs to give him some reasonable cards - two Samite Pilgrims, two Sawtooth Loons, and two Volcano Imps.

Justin's picks were only a little better, his choice cards were Nightscape Familiars, and Hunting Drake, as well as the usual Disciple of Kangee quality filler cards.

Predictions - Gary has an outside chance at 3-0, Nieminen almost no chance.