Going into round 12 this is how the table looked: 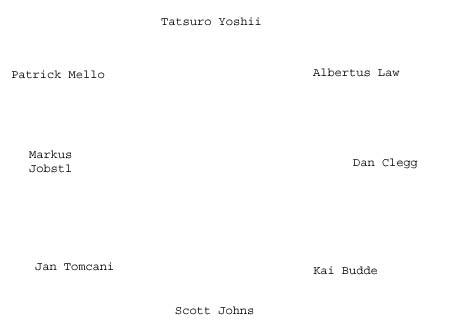 Of note is that both Kai and Scott are team-mates and hence any form of hate drafting was not likely to happen in that area as you will see.

Kai went into this draft only needing 2 points to ensure his position in the Top 8. 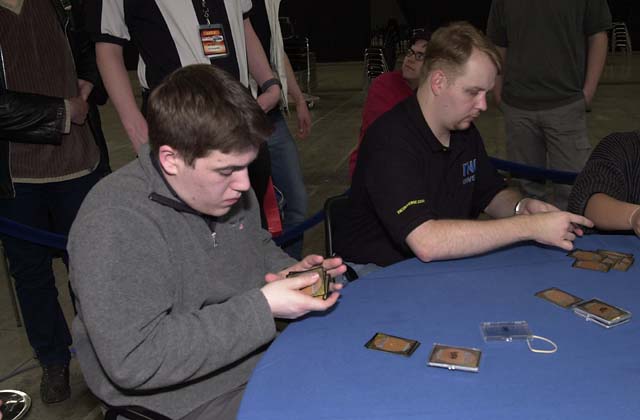 Benalish Trapper, Plague Spores, Samite Archer, Stormscape Apprentice, Pouncing Kavu, Llanowar Knight. With the knowledge that Dan Clegg had drafted blue-white decks of some kind all weekend, Kai thought it unwise to take a blue-white card in what was a deep pack of those colors anyway. "Besides, I knew that Scott liked drafting blue-white, so I thought I would try to set him up in it." Therefore Budde drafted the Plague Spores, while Dan to his right took a Probe. Meanwhile Scott had drafted a Stalking Assassin to his left, so I guess Kai should thank his stars that he didn't go blue at that stage.

Aggressive Urge, Explosive Growth, Kavu Titan, Firescreamer, Worldly Counsel, Ancient Kavu, Benalish Lancer. If ever there was a sign to go into green it was Kavu Titan. I imagine the German was torn between this and the Ancient Kavu as there was a fair amount of green in the pack, but the Plague Spores is always splashable in g-r and that Titan really is a beast. Dan had the choice of a Soul Burn or a Smoldering Tar, and took the latter as Soul Burn is not that great in a u/b deck whereas Smoldering Tar is definitely worth splashing. As expected, Scott took the Samite Archer Kai had passed him.

Thunderscape Apprentice, Fertile Ground, Salt Marsh. A pretty weak pack actually, so Kai took the Thunderscape Apprentice allowing himself the possibility to go r-g-b, but that would obviously make his tapper weak. Dan took what must have been a reasonably confusing signal in a Razorfoot Griffin, passing a Zap.

Quirion Sentinel, Zap, Explosive Growth. Kai took the Sentinel feeling like he wanted bears in his deck - not wanting to commit to red just yet. Dan: Urborg Shambler.

Booster 7: Kai: Lightning Dart; Dan: Duskwalker. It was obvious at this stage that Dan was going to be a black mage, but whether he was going to be u-w-b or r-b-u was uncertain.

Booster 9: Kai: Llanowar Knight; Dan: Ancient Kavu. This was the signal that Dan was looking for, and from this point onwards he seemed to draft only red or black cards.

Kai managed to pick up one more Aggressive Urge before the packs ran out of good spells.

Here was the color distributions at the draft table: 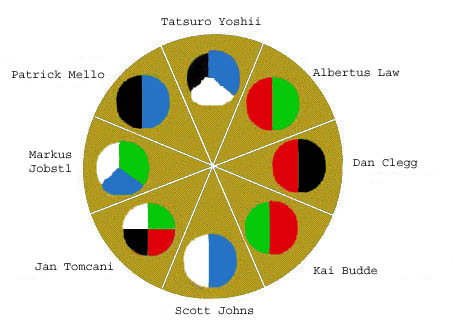 One would imagine from this line-up that Scott Johns would be really web set up as he had 4 white-blue picks in sets 1 and 3, but his deck doesn't look like luck was on his side - I guess we shall see. Two other things of note are that Albertus had loads of red picks in packs 1 and 3, whilst Kai was at the end of a red chain. There was not much Kai could do to avoid this though due to the confusing signals that Dan was sending.

Cinder Shade, Serpentine Kavu, Maniacal Rage. Not wanting to diversify his heavy green mana base too much Kai took the Serpentine Kavu. Meanwhile to his left Scott had opened up a Dragon, but not in his colors - Darigaaz the Igniter. Settling for an Agonizing Demise instead, the Dragon got passed to his teammate.

Darigaaz the Igniter! I wish I could tell you what else was in the booster of relevance, but Kai took it so quickly that both he and Scott ended up with a warning for communication. This should not reflect badly on the two players though. I challenge anyone to contain themselves when they get passed a Dragon in their colors. Scott took a Glimmering Angel.

In the rest of the boosters, Kai managed to get a Kavu Scout, Grappler, Stun and a 13th pick Kavu Climber by kind courtesy of Scott Johns.

This set was not great for Kai as there were three red mages to his right.

Booster 5: Thornscape Familiar over Stone Kavu. (Boy does he like his bears) Dan: Kavu Recluse.

That was just about the end of the playable cards in this set.

Kai seemed a little worried that his deck might not perform because his bears almost all had one toughness which made his Aggressive Urges weaker, but with a Dragon and a Titan in his deck I am sure he can pilot it to a 2-1 let alone the 1-2 he needs to make Top 8.