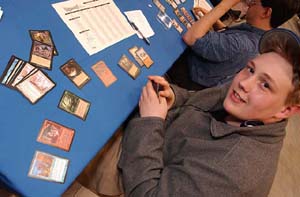 The buzz tribe this weekend has been clerics. Unassuming Richard Hoaen rode on the shoulders of Battlefield Medics and Daunting Defenders all day yesterday to a perfect 7-0 record—the only player to do so. He did not draft clerics in the first draft today and went a disappointing 1-3 with a so-so R/G deck. He has vowed to go back to the well one more time.

"R-Hoaen will just draft clerics," predicted Patrick Sullivan. "Its not about colors for him. He just opens the pack and looks for the best cleric. That's how he went 7-0."

What Ben Seck—or TBS to his legion of fans—will draft is another matter. Like Hoaen he can draft his way to Day three but both players—as will everyone at table two—need to go 2-0-1 in order to make it. "This is sort of like a third world country so it's like a GP for me," kidded TBS. When an onlooker asked what criteria he used to determine third worldedness, TBS said, "It's based on the amount of McDonalds per square mile."

All kidding around aside, the competitors got down to the serious business of drafting. Hoaen's opening pack featured a plethora of options from Infest to Krosan Tusker and Shield mage Elder—if Sully is to be believed a first pick contender—and Nantuko Husk. He took the Infest. Ben was faced with most of the same cards including Infest, Tusker, and Husk. There was also a Callous Oppressor in the pack and the man looking to be the first Australian in a PT Top 8 since Tom Chanpheng went for the gold.

Hoaen could scarcely believe his eyes as he took the second Infest. Ben made a move toward U/R with a Pinpoint Avalanche. Both players made reasonable picks for the rest of the pack but Ben did dip his toe into white for a Gustcloak Harrier and a daunting Defender but seemed to go back to red when he got a late Searing Flesh. Hoaen had picked up and Inspirit and a reasonable assortment of clerics when his Shieldmage Elder from the first pack came around. He also picked up a Cabal Executioner with two cards left in the pack.

Ben's deck looked all right at the end of pack one. He still had the potential to get out of red and go for U/W. His blue had many cyclers like Slipstream Eels along with a pair of Sage Avens. The next pack had to be kinder to him.

Rich took the maximum amount of time with his first pick from pack two. There was one card that could make his deck—a Gravel Slinger—and a Starstorm, Sparksmith, and a Lavamancer's Skills. He cut the Starstorm and passed two good red cards to Ben. Ben meanwhile had his choice of Shock or Slice and Dice. He took the latter. A second pick Cruel Revival was a pleasant surprise for Haoen. Ben decided to take the Lavamancer's Skills over the Sparksmith—an unpopular decision among the peanut gallery. 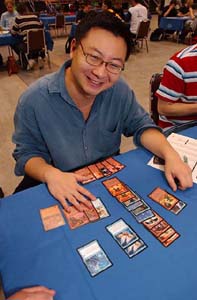 The rest of the pack was so-so for Hoaen and he picked up Buzzard, 'Double D', a Dredging and a Profane Prayers or three along the way. Ben was in heaven with no red drafters two players to the left of him and he got a couple of Skirk Commandos and a late Pinpoint Avalanche. Hoaen cut a 13th pick Battering Craghorn from meandering around the table into TBS's pile.

Things started innocently enough with Hoaen taking a Vile Deacon over Aven Redeemer while Ben nabbed a Skirk Marauder. He followed it with a Willbender while Hoaen took a Noxious Ghoul over Deathmark Prelate. Ben nearly fell out of his chair when he saw the next pack. He took an Echo Tracer and passed Skinthinner, Noxious Ghoul...and BANE OF THE LIVING!!!! Hoaen took an Aven Redeemer and awaited the surprise of his weekend.

Ben took a Skirk Drill Sergeant and passed another Skinthinner to the obviously happy Hoaen who was taking his Bane. Ben got passed another Marauder and then he started cutting cards from Hoaen. Lowland Tracker and two Vile Deacons. Talk about locking the barn after the horse has been passed an Infest and a Bane of the Living!

After getting the Bane Haoen felt pretty bad about taking the Starstorm and flashed it apologetically at TBS as they drifted toward their deck registration tables. "TBS is gonna kill me. I'm friends with him and all but Gravel Slinger wasn't going to make the cut..."

He plopped his Bane down to start registering and continued, "I felt pretty bad about it especially when he gave me this. Kai gave me the finger for getting the Bane while walking over here."

While looking at his ridiculous two Infests he added, "I hope I don't play any of the three Dutch players at out table. Once one of them sees them both they will all have."

A number of spectators were upset about his stubbornness in sticking to the clerics tribe after getting the two pyroclasms. Many felt he would have been better served in G/B. Hoaen was more concerned about the spectators themselves. Word was spreading of his bounty and he felt it would diminish their effectiveness if people were prepared for them.

"If I had taken the Infest..." Ben was musing to himself as I wandered over to his table. Truth be told his deck is pretty damn good as things stand. He has two Skirk Commandos, two Skirk Marauders, two Pinpoint Avalanche, Lavamancer's Skills AND a Slice and Dice. He was cutting a Backslide to make room for an Airdrop Condor—the only thing his deck was lacking was fliers. "There were Keeneye Avens but they came in the packs with the Marauders! There were zero Seaswifts that I saw... Backslide is just a luxury I suppose." With the Airdrop now in his deck he was ready to make his run at the Top 8.