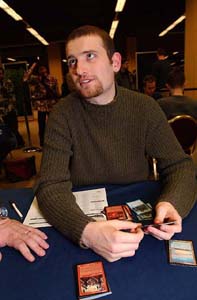 To all those who have been protesting that Rochester Draft is merely a glorified way to play sealed deck we offer up table #1. After 11 rounds of Swiss, these are the guys who went 9-2 or better and have the best chance to make it into the coveted Top 8:

This table includes not just the two best players in the history of the game, but also has 4 of the Top Ten drafters of all time. As I type this, I'm having trouble thinking of anyone who would displace Finkel, Budde, Jensen, or Rubin from a list of the top five drafters of all time. In addition, I think a couple years from now we're going to be looking at Eugene Harvey as one of the best who ever attacked for 2. Throw in the impressive resume of Nico Herzog, a local hero, and a Cinderella and you've got what has to be the greatest draft table of all time.

Everyone in the site was buzzing about this table and the draft was moved into the feature match area to accommodate all the spectators who wanted to watch. About a hundred people managed to get close enough to watch.

Herzog opened up the first pack and seemed happy: Slice and Dice stared up from the table at him. Stern didn't want to fight for red so he took Spitting Gourna and passed Shock to Bruneau. Eugene Harvey took Haunted Cadaver – it wasn't the best card left by any means, but he wanted to signal a preference for black to his neighbors. Finkel then took Charging Slateback, happy to play along with the "draft red in odd numbered seats" pattern. Budde took Choking Tethers and Jensen took the last red card that was in the pack: Reckless One. Turian was the last to pick and he took the first two white cards (Disciple of Grace and Renewed Faith). Jensen followed up with a Taunting Elf and that meant Budde got passed an 11th pick Imagecrafter. 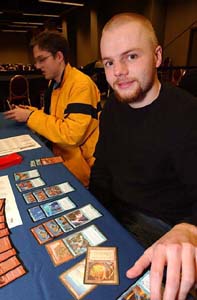 Stern was content to take Snarling Undorak from pack #2 – he settled in as a heavy green mage, picked up a black splash that gave his deck a touch of removal, and went on to draft a nice beatdown deck with a tight mana curve (multiple Elvish Warriors, etc), but I'm sure he wishes he had more removal, especially since there were a total of 5 Sparksmiths opened up at the table.

Bruneau took Essence Fracture over Pinpoint Avalanche with his second pick. I don't know many people who think the Fracture is better than Pinpoint Avalanche, especially for someone who already has a Shock, but by drafting this way Bruneau got to send his message loud and clear: "I WILL BE BLUE-RED." Harvey stuck with black and drafted Swat while Finkel was the recipient of that Pinpoint Avalanche.

Bruneau's pick turned out to do multiple good things for him. By shorting the beginning of the draft of a blue card, he probably influenced Budde's later decision to abandon blue in favor of black and white. But since Budde had been a blue mage in pack 1 (he got the Choking Tethers and then Turian and Jensen passed him a late Imagecrafter), everyone around him made other plans and the table wound up with just 2 blue mages total. In addition, Bruneau got to be blue-red, and he got hooked up with a couple of Lavamancer's Skills, along with all the blue cards that archetype could ask for: Ascending Avens (plural), Mistform Wall, Riptide Biologist, and even a Blatant Thievery. His early picks always seemed to have good red cards too – he netted a Sparksmith and a couple of Shocks. Worth Wollpert's comment after the draft (which I agreed with), was "Cinderella has two slippers on and a ticket to the dance." 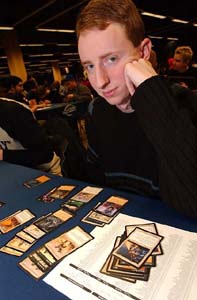 Harvey's black-white deck didn't seem very impressive as he drafted it, but he and Budde were a match up on the other six drafters so they didn't really need to worry about winning. Their plan was to draw with each other and then pick up another draw each in the last two rounds – with the projected cut at 32 points that would be good enough. Harvey's real goal was to try to help out his teammate and roommate Mike Turian. That wasn't easy since they were directly across the table from each other, but Harvey did a remarkably good job of it. He and Turian got into the same two colors (black and white) and then when Harvey was picking early in a pack, he would look to see if he could ship Turian any extra goodies. At one point Harvey took Daru Healer over Inspirit and lobbed that Inspirit all the way across the table to Turian's 8th pick. Gary Wise turned to me after watching that and commented "Beautiful move ... and I really need to move to Pittsburgh."

The person who may have benefited most from Harvey's lack of motivation was Finkel. When Harvey opened up his own pack there was a Solar Blast that was clearly the best card in the pack, but Harvey was more interested in getting into white (which Turian had signaled) than fighting for red. Finkel took the Solar Blast, then opened up a Sparksmith for himself, and his card quality was looking outstanding. When it came time for Finkel's to pick from the sixth pack it was the first time there wasn't an excellent red card staring up at him. By then most of the table had locked into both their colors and he could see that there were only two green mages. There were also only two blue mages, but they were both blue-red mages so he probably didn't want to be blue-red mage #3, especially if he wasn't sure that Budde had given up on blue. Green plays quite well with red so he wheeled Bloodfire Shaman and Wirewood Pride. He drafted a bunch of random bad elves with his next few and shared a knowing look with Herzog, who had played all the same bad elves (alongside a Wellwisher) against him in the previous round, where Finkel had to deal like a hundred damage in order to win, and did. In the end Finkel's deck turned into a fine red-green beatdown deck. He took Elvish Warrior over Symbiotic Wurm because he never expected the game to last until he got to 8 mana, and his opponents may indeed die rather quickly. He basically just drafted a better version of Dustin Stern's deck – better mostly because red is better than black, especially when there are four players drafting each color. 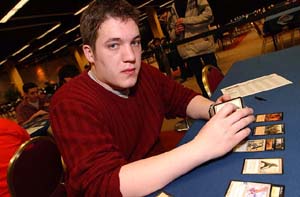 Budde was the man with the biggest influence over the draft. He had signaled blue in the first pack, but when it came time for his second pick he saw that only one person was drafting black so far. So he took a Fallen Cleric. Then he took fourth pick Boneknitter, then third pick Swat, and he was in black pretty much the whole time. I talked to Budde after the draft and he explained why he switched out of blue with characteristic subtlety: "Black-blue can't win a game ever. It's horrible. It can't win without, like, four Choking Tethers or broken rares. Lavamancer's Skill is the only reason to draft blue and I had two red mages on either side of me." Budde further explained that he'd much rather be the third white mage than the third blue mage, since white is a lot deeper, in general. In any case, Budde wound up drafting black-white in the 6 seat while Harvey and Turian were drafting it in seats 4 and 8. Budde's deck is mediocre, but it shoudn't matter since he won't need to do anything but take intentional draws with it unless the pairings come up screwy.

Turian was the one who suffered the most from Budde's color switching. He was fighting three other players for black, after Stern moved in, and two others for white. Even with the assistance from Harvey, his deck turned out mediocre. It's got some beatdown and some tricks, and I've seen him win with much worse, but against these players he'll probably need some luck if he's going to get into another Top 8. One interesting pick Turian made was Swat over Pacifism, after 5 Sparksmiths had already been opened.

Jensen's draft was pretty straightforward. His seat called for red-green, and he drafted a fine red-green deck. It's been a while since "Baby Huey" put up a Top 8 on the Pro Tour (I played in the one Pro Tour where Jensen actually got to play on Sunday ... London was my last). He does deserve his reputation as one of the Tour's finest magicians as his Grand Prix finishes, US National finishes, Masters finishes (including a win) and Pro Tour Top 8 near-misses attest, but he really wants another trip to the Promised Land.

That just leaves Nicolai Herzog. The one seat can be quite a lonely place – you just get to make one real pick and then you are at the mercy of the guys in the 7 & 8 seats. Herzog took his Slice and Dice first and Turian knew that Herzog would never leave red if he already had a card that good, so Turian chose not to fight. In addition to passing him reasonable red, Turian passed him all the blue cards and Herzog was delighted to go red-blue. He wound up with two Skills and two Sparksmiths and I would call him a cinch for Top 8 except there are so many good decks and so many good players at this table that anything is possible.