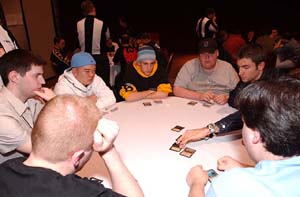 The math is simple for the competitors at Table 3 - Win 'em all and you're in the Top 8, anything less and you're out.

Pack 6 featured little of note other than Canu's questionable choice of Famished Ghoul over the highly underrated Sadistic Hypnotist, while Pack 7 saw Fung choose Mystic Visionary over Kirtar's Desire (signaling an aggressive U/W strategy) and Canu sinking further into 3-color with Chatter of the Squirrel. The last of the first set of packs gave Noah Weil a 2nd pick Cephalid Retainer, solidifying his abandonment of Red in favor of heavy Blue.

As the draft direction switched, Nicolai Herzog opened his second consecutive Ghastly Demise, while Justin Polin got Iridescent Angel, one of the best possible win conditions for slow Blue/White. Franck Canu took 6th pick Careful Study over Still Life, signaling he hadn't abandoned Blue and was still thinking 3-color. The next pack gave Polin a Broken Broker, Hovi a Thermal Blast (he would abandon Black entirely in favor of Red), and Dato a Looter. Franck Canu got a much-needed Darkwater Egg but had to pass a Dreamwinder to get it.

The third set of packs is where things got crazy. In four consecutive packs, rare bombs were opened. Jeff Fung scored an Aboshan, Canu snagged a Mortivore, Froehlich busted a Kamahl, and Hovi opened a Kirtar's Wrath that he shipped to Polin.