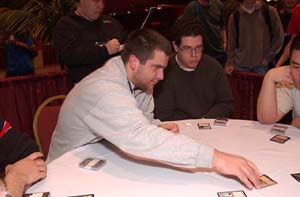 Draft Table #2 halfway through Saturday at the Pro Tour is pretty cool. Everyone is happy to be there, but anxious about what the next three rounds will hold. A good draft means a Top 8 and all the glory that entails. In San Diego, table 2 had quite a few familiar names, each of whom know that only two of them would get to play on Sunday.

Dirk Baberowski had the first seat in the draft. He's having surprising success with aggressive red-blue decks all weekend. He's gone 6-2 with them despite the face that most pros consider it the worst color combination. He hadn't really drafted it before, but he'd been theorizing about it or the last few days and it all came together at two of his three tables so far. He took Aven Fisher first pick first pack and that pretty much determined how the entire draft would go for the entire rest of the table.

Mike Turian had the two seat. He's the last remaining representative of Team CMU and is trying to justify all the hype. He looked at pack 1 and determined that Rabid Elephant was the card for him.

Terry Tsang sat in third position. He's one of several players from Vancouver, Canada who's been having a good weekend. Jeff Cunningham was drafting at table 1 and Jeff Fung was also in contention, drafting at table 3. Vancouver's most notorious son, Ryan Fuller, has been having a mediocre Pro Tour but he's going to take home at least $10,000 from the Masters Series. Tsang took Dirty Wererat from the first pack.

Your Move Games store owner Rob Dougherty has quietly become one of the most consistent winners on the entire Pro Tour. He's not quite Kai Budde, but he always seems to be in the mix as the final rounds of the Swiss unfold. This weekend he says he doesn't have a great draft strategy: "All I know how to do is draft red-green. I can draft several different kinds of red-green decks, but that's all I can draft." Dougherty took Springing Tiger fourth.

Italian layer Giulio Barra picked fifth and went with Childhood Horror. American Dan Burdick went sixth and took Chainflinger. Andy Wolf, trying to complete his comeback with a Top 8 in the same state where he got his first and only PT Top 8 way back in 1998, took a seventh pick Syncopate and then Osyp Lebedowicz got the wheel. He took Anarchist and Acceptable Losses, shipping a Beloved Chaplain to Wolf, signaling both a desire for red and a willingness to "play nice." That also pretty much guaranteed that Baberowski wouldn't be continuing his red-blue experiment.

With one notable exception, there was very little color switching after the basics were established. All four of the players in even-numbered seats decided to draft red-green. All four of the players in odd-numbered seats drafted blue decks - either blue-white or blue-black. One Tsang opened up a Psychatog and went blue-black in the 3-seat, Barra (in the 5-seat) was smart enough to lean his blue deck towards white. Wolf was also blue-white so Baberowski was delighted to go into blue-black.

Wolf opened a Cabal Patriarch. He looked through his cards and realized he only really had two good white cards (Second Thoughts and Beloved Chaplain), so he switched into black for the Patriarch. His own deck probably wound up better because of the switch, but the biggest impact was on Baberowski and Barra. Instead of being one of two black drafters, none of which were among the five people feeding him, Baberowski had to fight for his black with the guy two to left. Meanwhile, the table was down to just a single white mage: Giulio Barra. He got to enjoy selections like 7th pick Hallowed Healer, 8th pick Nomad Decoy, and 11th pick Patrol Hound. Both Turian and Lebedowicz seemed to consider switching into white, and Lebedowicz may have wound up with enough white to convince himself to run a three colors, but pretty much everything white went to Barra.

The three blue-black mages each complained after the draft that there really wasn't enough removal available. There were no Ghastly Demises and only a single Afflict opened up. Wolf took his third Aether Burst instead of his first Morbid Hunger and wound up with no real removal. Baberowski admitted that he would have been willing to first pick an Innocent Blood if one had ever been available to him, especially after he drafted Chamber of Manipulation.

The four red-green mages were each forced to deal with lower quality cards then they're probably accustomed to. With all that competition for the cheap creatures and the finishing spells, the successful players will be the ones who make something good out of their crumbs. Dougherty believes his deck is just awful and he's got to try to win with Magma Vein or by sideboarding in Battle Strain against the control decks. Lebedowicz seemed distraught towards the end of the draft and seems likely to splash white for Hallowed Healer. Turian had perhaps the most ingenious plan - he's running Holistic Wisdom so that he can discard his worst cards (2 Scorching Missiles and a Rites of Spring) to get back his best cards (Shower of Coals and Liquid Fire). It sounds kind of janky, but, as Turian explains "that's what happens when four people draft the same color combination." Another factor to keep an eye on is the high number of Firebolts that are running around. The blue-black decks got lots of Dusk Imps and Aven Fishers, but very few Windreaders. Turian's multiple Rabid Elephants and Elephant Ambushes make his deck perhaps the best against Firebolt.

All in all I'd say Barra has the best deck since everyone else was fighting for their cards. It's hard to say who else should advance to the Top 8 from this table, but my heart will always belong to CMU so I think I am honor-bound to pick Turian.