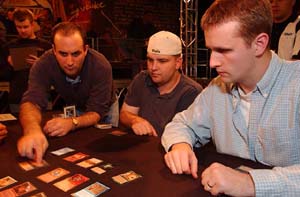 It all comes down to this. The winner of this match will play in front of the cameras tomorrow, and the losers will watch. Wise is looking to become the first man to win two Team Pro Tours, and Maher is aiming for his second Pro Tour victory. However, their opponents are nothing to look past. Weigersma has a Pro Tour Top 8 under his belt, and van der Broek went 6-0 during the Standard portion of Worlds last month.

Reeves kicked off and took Caustic Tar, giving Maher Chainflinger. The pack came to Starmaker and Karsten drafted Dusk Imp, van der Broek got Chatter of the Squirrel, and Weigersma took Second Thoughts. Wise got a wheel of Auramancer and Demoralize. Maher took Morbid Hunger out of his pack, which was likely a counterdraft since red/black is horrible in the "C" seat. Karsten drafted Blessed Orator, van der Broek kept with the green plan taking Rabid Elephant, and Wise wheeled Aven Fisher and Mystic Visionary. This was a bit odd, since Wise was signaling white/blue in the "A" seat, which is almost always black, or red/green. Karsten opened the next pack and took Execute in response to this, giving Wild Mongrel to van der Broek and Zealot to Weigersma. Wise then wheeled Patriarch's Desire and Whispering Shade, going into black and making Karsten's Execute pick pointless. van der Broek's green monster army kept growing with Springing Tiger, Wise took Childhood Horror, Reeves got Embolden, and then a late Animal Boneyard to go along with a late Chamber of Manipulation he had picked up. Weigersma opened and counterdrafted Overrun, Wise got a second Whispering Shade, Reeves drafted Puppeteer, and Maher took Second Thoughts to lean into white to support his red. As Odyssey ended, Reeves got a key Mongrel and Maher picked Hallowed Healer.

Wise opened the first Torment pack, and it was loaded. He took Faceless Butcher, passing the goods to Starmaker. Weigersma got Grotesque Hybrid, van der Broek drafted an incredible Llanwan, Cephalid Empress that could potentially destroy Reeves' blue/green deck, and Karsten picked up Pardic Collaborator. Weigersma went solid into black as a second color when he opened and took Crippling Fatigue, and the Torment goods kept going in Starmaker's favor as Karsten picked up Mutilate. van der Broek took Temporary Insanity in the following pack, going into red or intending to splash blue for Llanwan. Karsten's pack was also loaded, giving him Soul Scourge. It came around to the Americans and Maher took Fiery Temper, Reeves drafted Hydromorph Gull, and Wise picked Skywing Aven. The last Torment pack gave Maher a second Fiery Temper, and Wise a second Faceless Butcher.

Reeves opened Judgment and took Wormfang Crab, while Maher got Shieldmage Advocate. Weigersma got a Mirror Wall, and Wise used his picks to counterdraft Nantuko Tracer and Mental Note. Maher counterdrafted Wormfang Drake out of his pack, giving van der Broek an Anurid Swarmsnapper, and Weigersma his second Mirror Wall. Karsten opened the impressive Phantom Flock, and Balthor, the Defiled made its way to Wise. The massive reanimating creature isn't so impressive in the black on black matchup, but Wise's two Butchers gave it a lot more potential. Just as things seemed to be even, Starmaker opened Glory, and it went to Weigersma to break his matchup against Maher wide open. The last few packs saw Weigersma's deck getting yet another boost thanks to Phantom Flock, Wise picking up Masked Gorgon, Reeves getting Phantom Centaur and Elephant Guide, and Maher drafting a key Funeral Pyre to deal with Glory.

Sideboard: How do you guys think this draft went?
Maher: (Reeves and Wise) are both going to have a good matchup. I may have lost my matchup when they opened Glory. Neil's matchup is going to come down to whether his opponent draws his 6/6/6 mana.
Reeves: Yeah, he's definitely got 6/6/6 mana and Llawan is not going to be good. I really wanted to get Waste Away or a (Toxic) Stench to put a little spicy spice on, but there was never a chance.
Maher: When they sat black/blue next to him there weren't enough playables so he couldn't get a splash.
Wise: Frank's black was awful but he went into all four colors at different points and ended up black/white, splash something.

Sideboard: I noticed that at first Gary seemed to be going white/blue, and then once your opponent went into black you switched...
Wise: No, it was a question of which I was going: white or blue.
Maher: He was black, it was just whether he was black/white or black/blue.

Sideboard: I realized that you got the Whispering Shade pretty easily. Did they have a chance at that Shade? I don't remember.
Reeves: Yes they did.
Wise: They chose something not that great over it. 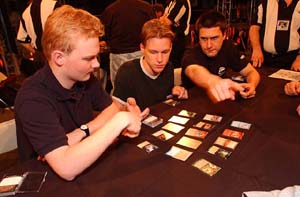 Sideboard: You had a choice between either taking the Butcher or giving them Llanwan, and you took the Butcher. Were you not concerned about...
Maher: There's no point in giving them a Butcher and a Hybrid. They had two black players, so we couldn't give them the two black cards.
Reeves: If they only had one black player we may have taken Llawan, but it would have just been a bad Grizzly Bear in his deck. The Butcher wins that matchup a lot of the time.

Sideboard: Were you concerned that it would be good against Neil?
Reeves: At the time, I had a Puppeteer as my blue creature.
Maher: Even if it is, you only have six blue creatures. It's not game over by any means.
Reeves: It's not like the biggest beating ever. I don't want to see it, don't get me wrong, but it's not just god awful. Most of my men are green. That Glory was a kick right in the pants.
Maher: Right in the pants.

Sideboard: So you think that your matchup isn't favorable, but Gary and Neil's are?
Maher: I have no idea how the matchups are going to go, I just thought I was winning right up until they opened Glory.
Reeves: I have no idea what's in (my opponent's) deck! I know the cards, but I don't know what's going to be put together! He drafted like seven colors!

Sideboard: But you guys think Gary is going to win his matchup?
Reeves: He's got double Shade.
Maher: (To Gary) Are you playing Cabal Coffers? To turn blue mana into black mana for your Shades?

Sideboard: Are you going to splash for the Animal Boneyard?
Reeves: I don't know. It's a sick one! I have to think about it, I'm not gonna lie.
Maher: His opponent did get a Simplify, and he got two Venomous Vines.
Reeves: Do you think he'll run them in the main?
Maher: No.
Reeves: I'll get him with it!
Maher: We'll see how the deck looks.

Sideboard: Did they know you could get that combo? They seemed to just let it pass through.
Reeves: (looks at the combo) Woo! GOTCHA!