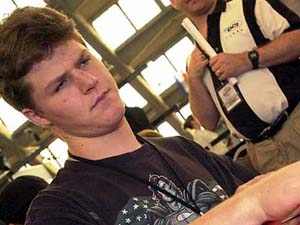 Rubin is a true veteran in Magic, despite his young age. He made his first Pro Tour Top 8 back during the 1997-1998 season, losing in the finals to Dave Price. Since then, he's been to the Top 8 stage three other times. Aside from that, he also won two individual Masters events, which added quite a bit to his lifetime winnings. He came to this pod in contention for Top 8, but would likely need a 3-0 record to pull it off.

Rubin's first pack had Broodstar and noting to rival it, making the decision very easy. Enforcer came second, making affinity the focus right from the start. Neurok Spy was drafted third, and Rubin went into a second color by taking Pewter Golem fourth. Ancient Den came fifth, and Rubin took AEther Spellbomb sixth over Nim Shrieker. As the pack wound down, Rubin passed Nim Lashers in favor of Steel Wall and an off-color Spellbomb. The only playable cards in the second pack were Arrest, Barter in Blood, Lumengrid Augur and Wizard Replica, which was Rubin's first pick. A second Enforcer followed, and another Pewter Golem came third. Rubin was happy to take Terror fourth, although the pack also contained a Talisman, and you could tell that he wanted to get some sort of acceleration. Once again, he took AEther Spellbomb over Nim Shrieker, and picked up two Necrogen Spellbombs to help with his affinity strategy.

Darksteel provided another bomb in Arcbound Ravager. He took Spire Golems with his second and third picks, passing Essence Drain when picking up the second one. The fourth pick contained Pulse of the Grid, Spawning Pool, Nim Abomination and Arcbound Bruiser, but Rubin interestingly decided to take Arcbound Stinger. Through the rest of Darksteel he counterdrafted two Tel-Jilad Outriders, drafted two Darksteel Citadels, and managed to get back Pulse of the Grid 12th pick.

Rubin: Pretty well, I'm not ecstatic. I opened two huge bombs, so that was lucky.

TW: Why exactly aren't you ecstatic?

Rubin: I don't have a lot of removal, I didn't get an Engineer. An Engineer would have been ridiculous in my deck, and of course I didn't get one.

TW: You didn't get any Myrs or Talismans.

Rubin: Nope. I wish I did. That would have been nice.

TW: What I noticed is that every time one came around, there was a Terror or something else you couldn't pass.

Rubin: Yeah, I passed a Gold Myr and a Lead Myr. This isn't a fast deck. And the trouble is, it's okay to have a slow deck. But a slow deck without removal is a problem, because if I get behind I don't have a lot of ways to correct that problem.

TW: Why did you pass Essence Drain then, taking a Spire Golem?

TW: Even if you don't have removal?

Rubin: Yeah. The thing is, five mana for three damage is still slow, and I already had two five drops. It's removal, but it's too slow.

TW: The odd thing is you're saying your deck is slow, but I saw you taking cheap cards over things that were more expensive.

TW: I'd guess that eighty percent of players wouldn't have taken Arcbound Stinger fourth pick there. They would have taken the Pulse, or the Abomination, or the Spawning Pit, or the Bruiser.

Rubin: Yeah, I actually think that's an easy pick, honestly. A lot of people would have taken the Abomination, but the Stinger is really good in my deck. You need artifacts, especially with Ravager and Broodstar.

Rubin: I think Nim Shrieker is good and potentially very powerful, but sometimes it's not good. I also have no removal, so I can't kill a small flier that's in the way. And my deck is slow, and I need cards that aren't slow. AEther Spellbomb is like butter, it's the perfect card. It does something good and it's an artifact, and that's what I needed. I generally think that's the right pick. I would take Myr over Nim Shrieker, or anything like that.

TW: Lasher is no good either? A lot of people really like him.

Rubin: I don't like Lasher. Again, it's a card that every once in a while does something great, but most of the time it's poor. It's got one toughness, so it'll trade with anything. Nim Shrieker is better and harder to deal with obviously, but it's the same thing.

TW: Is Pulse of the Grid a twelfth pick?

Rubin: No. I think Ben (Stark) hooked me up. I think he was being nice.

Rubin: I don't know. I'd have to get lucky I think. There's gotta be a deck better than this one, I can't imagine that I have the best deck. It could happen, I could 2-1. I have some good stuff, but it's obviously going to depend on these two cards (Broodstar and Ravager)

1 Disciple of the Vault 1 Terror