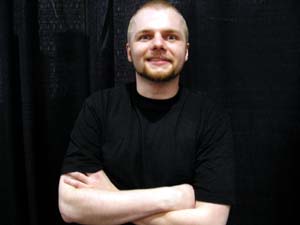 Herzog sat down at today's last draft and grinned. The Norwegian stood alone at the top of the standings and needed at most one win--and perhaps only a draw--to clinch his second consecutive limited Top 8. "Magic is so easy, you know," he admitted. "I made the most ridiculous mistakes and was able to come back from them every time."

The game didn't seem so easy to Herzog earlier this week at the Magic Invitational, where he was pummeled round after round and was lucky to not finish last. But that was merely the appetizer--this event is the main course, and the fuzzy-headed Scandinavian is surely eating his fill.

Herzog was at the table with two Spaniards (Angel Perez del Pozo, Aniol Alcaraz), two Japanese (Masashi Oiso, Kazuya Hirabayashi), two Americans (Mark Heberholz, Mike Turian), and a Frenchman (Christophe Haim). Herzog was feeding Herberholz and was being fed by Perez del Pozo. He knew Perez del Pozo had a penchant for black and green, and would be looking for signals from him one way or another.

Herzog's first pack contained Bonesplitter, Electrostatic Bolt, Blinding Beam, Skyhunter Patrol, and Myr Enforcer. With two good white cards, the safe choice was one of the artifacts or the Bolt, and he took the Bolt. With pick two he took Shatter over Looming Hoverguard, and had to be thinking that Herberholz was blue affinity. In fact, Herberholz took Neurok Spy first and gobbled up the Enforcer and Hoverguard right on schedule. Herzog took Mind's Eye with pick three, shipping an Atog and a Goblin Replica. Hopefully that trickle of red wouldn't lead anyone down river of him too far astray.

A turning point for Herzog came in pick 4 where he had to decide between Predator's Strike and Barter in Blood. Getting them both from Perez del Pozo was a very muddy signal, so Herzog went down the green path and took the Strike.

The green cards were not coming after that; Herzog took Alpha Myr, an off-color Talisman, and a Wizard Replica, passing on the lowly Tel-Jilad Exile.

Round about the eighth pick, Herzog's draft made a dramatic turn. He was bug-eyed at the Nim Shambler starting back at him; he was sure that someone at the table would be drafting the Nim deck. Taking it as a sign, he put it in his pile. The following packs gave him a Nim Devourer and a Nim Lasher 10th and 11th. Black it was.

A second Electrostatic Bolt was waiting for him in the first pack going the other way, and from there out he was looking for the traditional red-black aggressive Nim deck cards. He took two more Shamblers, a Myr, a Viridian Longbbow (over Consume Spirit), and a Chromatic Sphere with his next several picks. He took a Goblin War Wagon over a second Sphere, and regretted it later, as the Wagon is slowwww and he has tons of four-drops already.

A gift Nightmare Lash fell in his lap 8th, and he gave me the thumbs-up as he took it. The rest of the packs were not good, and he shrugged as he was shipped Deconstruct, Tel-Jilad Exile, Turn to Dust, and Journey of Discovery in consecutive packs at the end. He took many of them, preventing any green players on his right from getting the total hookup.

Herzog went into Darksteel looking for a Whispersilk Cloak--the perfect complement to his army of Nims. He took a Grimclaw Bats first, and then was passed a pack with a Cloak, but that pack also contained the uber-bomb Death Cloud, which he snapped up quickly.

That Cloak never came, but he did manage to get more and more Bats and Dross Golems to keep up the beats. His last difficult pick was Emissary of Despair over Essence Drain; he took the flier to keep the deck agro.

After the draft, Nico wanted to talk about the Predator's Strike over Barter in Blood pick. "People overestimate that card," he said of the Barter, "Sometimes it works out, but usually it's [obscenity deleted]. I could have picked it--it would have been a better signal, but I don't think it would have been good in my deck. I really wanted to be green." He figured that if Perez del Pozo would pass a Predator's Strike, he wouldn't be green. That wasn't the case.

Perez del Pozo was green-red. To Nico's left, Herberholz ended up blue-black (thanks to the Barter) and has a great deck. Oiso was also black--it seems that everyone at that part of the table noticed the black slipping all at the same time.

Herzog's deck is a little short on artifacts--only 11--but he doesn't need any miracles from it, just a single win will get him to the promised land of Sunday play.