With over 40 years of competitive M:TG experience and nearly a dozen Top 8 appearances between them, Illuminati [Justin Gary (A), Zvi Mowshowitz (B) and Alex Shvartsman (C)] faced off against Your Move Games [Darwin Kastle (A), Dave Humpherys (B) and Rob Dougherty(C)] in the ninth round of GP New Jersey. 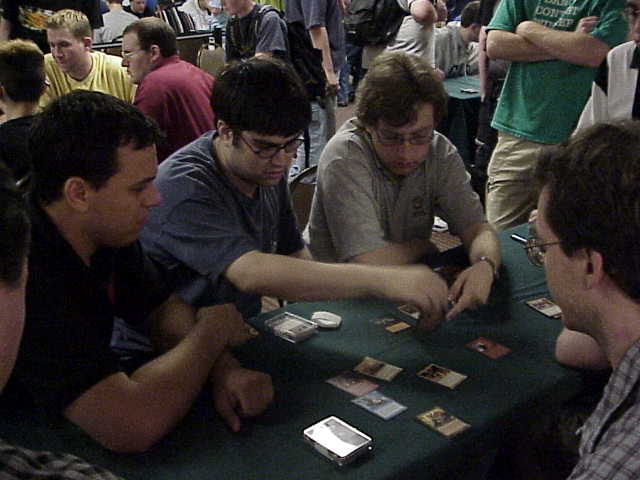 YMG won the flip and elected to open first, and Humpherys cracked a mid-level pack containing Painbringer, Werebear, Whispering Shade and Shelter. Hump declared a black preference immediately, selecting the powerful, but fragile, Painbringer. Dougherty picked up Werebear and Gary elected to move initially into green with a Chatter of the Squirrel, leaving the Whispering Shade to Zvi, who would seemingly be facing off against Humpherys' black deck. The pack was basically killed with Shvartsman's selection of Shelter, leaving Kastle to snap up a Leaf Dancer in response to Gary's Chatter. On the swing, Kastle snagged a Peek and Gary picked up a Last Rites.

Things began to get ugly rapidly though, when Dougherty busted the Pope (Cabal Patriarch) in Pack two, shipping a Dreamwinder, Crypt Keeper, Barbarian Lunatic, Syncopate and a second Whispering Shade to Illuminati. Gary took the Creeper and Zvi picked up his second Whispering Shade - a strong signal to Humpherys to either abandon black (which can rarely support three players, let alone four), or to draft a house full of ways to answer the Shades. Shvartsman picked up Dreamwinder (over Syncopate) and Kastle moved into white with an Auramancer. Humpherys was left with a solid wheel of Barbarian Lunatic and Fledgling Imp, and seemed content to play an unusual Seat B black-red mirror match, despite Zvi's two Whispering Shades.

In the third pack, Gary opened a bomb of his own, Thought Devourer, and shipped an Aven Windreader, Syncopate, Crypt Creeper and a Krosan Avenger. Zvi picked up the Creeper, Alex drafted the Windreader and Kastle was left with the Syncopate. Humpherys passed the Avenger on to Dougherty to help out his top heavy curve, instead picking up a Morgue Theft.

Over the next three packs, Gary settled into blue by adding a Cephalid Looter, Thought Eater, Syncopate and a Scrivener, leaving his second color flexible. Zvi kept mostly to red and joined the bomb club when he cracked and picked a Shower of Coals. Shvartsman picked up quality green men, selecting Wild Mongrel over Treetop Sentinel, which was a solid, but not spectacular creature against Gary's non-green deck. Elephant Ambush followed, plus a couple of cantrips.

On YMG's side, Humpherys drafted a Dirty Wererat and two more Fledging Imps, but could manage only a Flame Burst as removal. Dougherty added another home run in Roar of the Wurm, and a few mid-level green creatures, and filled out his picks with a Rites of Spring to help find the heavy black needed for the Patriarch. Kastle, like Gary, did not seem to have settled on a second color, concentrating on blue by picking Aven Fisher, Aether Burst and Psionic Gift. However, he had indicated a willingness to draft what had been, to this point, almost non-existent white by picking up an additional late Auramancer.

The Torment packs were unusual, containing little burn (a single Fiery Temper and two Sonic Seizures), a lone Butcher (which ended up in Gary's deck) and only one strong black uncommon (Sickening Dreams). In the first pack, Kastle picked a Skywing Aven, and shipped a dangerous Arrogant Wurm to Shvartsman as well as an Edict, which Zvi shipped to Gary in favor or a Cabal Torturer. Shvartsman's deck really fell into place as he cracked a Narcissism and was shipped Centaur Chieftain and an Aquamoeba, which would facilitate a third turn Arrogant Wurm and allow him to take full advantage of a Basking Rootwalla and a pair of late Obsessive Searches. 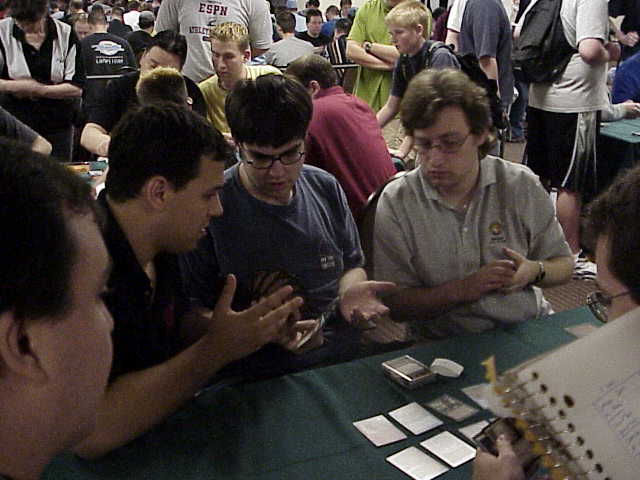 A good example of experienced drafting arose in the middle of the Torment packs, where Gary, who was quietly assembling a solid blue/black deck, had the opportunity to pick an underrated Unhinge on the comeback, which would have fit well into his curve, but instead took a Rancid Earth. This allowed Zvi to shore up the three slot, in which he had only a Cabal Torturer and a Fiery Temper. The Unhinge would not only provide a little disruption for Humpherys but, Illuminati hoped, would help Zvi to hit his fourth (and later) land drops - the level at which the bulk of Zvi's few significant threats began. Four people drafting black, and a low concentration of red cards, led to Zvi packing a deck with an exceedingly low creature count (for red/black) - with only nine animals by the end of Torment, and ultimately, only twelve men in total (including Earsplitting Rats, Pardic Lancer and two Dwarven Grunts).

Unfortunately for YMG, Torment was not kind to Dougherty either, who was stuck drafting black in what is widely believed to be the worst black seat at the table, but was trying to get by on the third best black behind Zvi and Gary. Dougherty ended up adding primarily mid-level green spells (Krosan Restorer, Acorn Harvest, Calmer) though he did "steal" a Soul Scourge (that Humpherys had indicated he intended to take) and got a gift fourth pick Sickening Dreams. One bright spot for Rob was the Centaur Chieftain he cracked in his Torment Pack, which also contained a Possessed Aven. It was picked up by Kastle, and looked to figure heavily in the blue on blue matchup with Justin Gary.

Kastle did pick up what looked to be another potential game breaker against Gary's blue/black deck in a fifth pick Stern Judge; at that time, Gary had only a Chainer's Edict to deal with the Judge. However, Gary added a Butcher and a Crippling Fatigue in the next two packs to buy himself a margin of comfort.

One particularly insightful selection was made by Shvartsman in the 5th Torment pack on the comeback, when he snapped up a Churning Eddy. While his opponent's deck was full of powerful cards, it was also exceedingly top heavy (and, as it turned out, would grow only heavier in Judgment), and with Alex's rapid, low casting cost, madness-fueled deck, the Eddy would provide a much greater tempo advantage than it typically does. Additionally, this would give Shvartsman an additional way to handle a Roar Token - one of the few things that could meaningfully slow Alex's beats.

In Judgment, the teams both looked to fill holes - Zvi needed a bunch of decent animals, Dougherty needed a handful of two and three casting cost green creatures, and Darwin looked for the payoff in white and white/blue. Unfortunately, red and black offer little in the way of creature help in Judgment - Treacherous Werewolf and Barbarian Bully being the exceptions. In fact, only a single Werewolf appeared, and it was snapped up by YMG, leaving Zvi with what would prove to be, potentially, his best chance at victory over Humpherys' black/red deck - Worldgorger Dragon. Humpherys had managed to stock his deck with plenty of blue-collar three drops (e.g., three Fledgling Imps), which, while not inherently exciting, presented a problem for Zvi's grunts and 1/1 four drops. However, Hump had no way to remove the Dragon on a one for one basis - in fact, Humpherys would have to use a minimum of three, and perhaps four cards to kill the Dragon, if it hit play. However, Hump picked up a Swelter.

Dougherty's card power level continued to soar in Judgment, when he added not one, but TWO Treacherous Vampires and a Giant Warthog, but he was unable to add any two or three drops beyond a single Phantom Tiger. 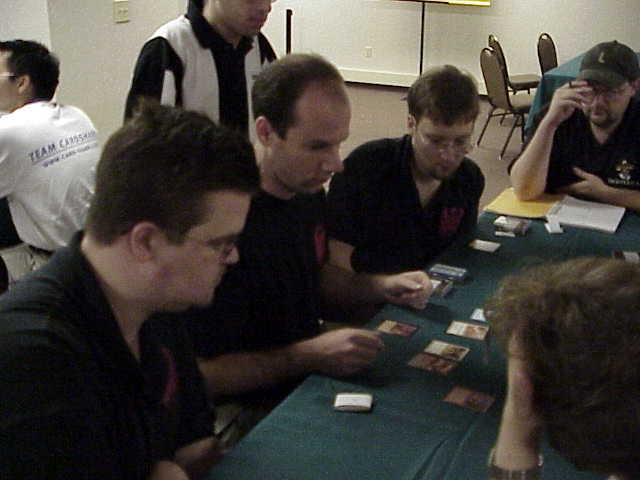 Kastle's deck also came into its own in Judgment, where Darwin added Mirror Wall, Phantom Nomad, Valor and the powerful Wormfang Drake and Shieldmage Advocate. Darwin also drafted a terrific potential splash in Arcane Teachings. His opponent, Justin Gary, also picked up a Mirror Wall (though it was a purely defensive card in his deck) as well as two copies of Lost In Thought, in hopes of buying himself time to reach his Thought Devourer and Butcher, and minimize the effectiveness of Kastle's Possessed Aven and Wormfang Drake. However, Kastle had wisely picked up a late Floating Shield in Torment, which with two Auramancers, could spell real trouble for Gary in the air war.

In the final Judgment pack, Illuminati had the opportunity to pick up a card which is usually considered chaff, but which had strong application in the Shvartsman/Dougherty matchup; on the comeback to Alex, Justin and Zvi both enthusiastically gestured at the lonely Envelop, which Alex quickly drafted, giving him, weirdly enough, a potentially powerful answer to Sickening Dreams and an additional measure of Roar defense. Alex ended up main decking his final pick of the draft!

In general, Alex's deck seems to be much tighter and have a far lower curve that Dougherty's. Dougherty's cards are ridiculously powerful, but also very slow, and it is not unreasonable to believe that barring mana issues for Alex (which are not likely to be a factor even though Alex decided to splash for Glory, Unquestioned Authority and Shelter rather than running a straight blue/green given his two Obsessive Searches and Diligent Farmhand), or overextension by Alex followed by a busty Sickening Dreams by Rob, that Alex will out speed Dougherty before he can come fully online.

On the other hand, Humpherys looks to have a relatively easy time with Zvi's deck, unless the big Dragon makes an appearance, or Humpherys allows Zvi to maximize his removal until he can safely cast and protect his pair of Whispering Shades. It appears, however, that the spreading of black over four decks and the lack of a significant number of red creatures in Odyssey left Zvi with a terrible creature base to work with. This match should go to Hump.

The deciding match looks to be between Kastle and Gary - both decks are well built and have a quality curve. Both have a blue rare bomb, and significant air forces and both have Mirror Wall. While it appears that Gary may have a slight edge (in that he has actual removal in the form of Butcher, Edict and Crippling Fatigue) in a shorter game, if Darwin gets a Floating Shield on a beater or draws the game out long enough to activate Shieldmage Advocate or Possessed Aven**, or can swarm Gary with 3 casting cost flyers, Darwin should be able to squeak out a victory.

Overall, a very interesting draft, with some insightful late picks and some important lessons regarding mana curve, color depth, and reconsideration of facially strong or weak picks in light of specific matchups.

** Ultimately, Kastle opted not to play any swamps in his deck, thus rendering the potential assassination ability of the Possessed Aven all but useless.