By Noah Weil and Scott Johns

this draft we tried something different. We watched four players sitting right next to each other to see how their color choices affect their neighbors. Would these 7-2 Pro Tour players help each other out, or would they fall into each others' colors like so much morass? The results were interesting, as the most established pros followed their own paths well. The only snag was Marijin Libaert, whose choices ended up sinking Geoffrey Siron. Before the draft started, when Geoffrey Siron found out their picks would be reported, Siron begged his neighbor "Please do not @%#^ me." Ah, foresight.

André Coimbra would be passing to Nick Eisel who was passing to Marijin, who was passing to Geoffrey Siron. Before the draft started, Nick mentioned to Scott Johns how much he loved to draft blue-red. His first three drafts had been U/R, U/R, and R/G/W Slivers. It was only the Sliver deck that didn't 3-0. While Nick was open to playing black or white, he definitely had a preference going into the draft. The person passing to Nick, André, helped beautifully with this plan by opening and drafting the underrated Sudden Spoiling. 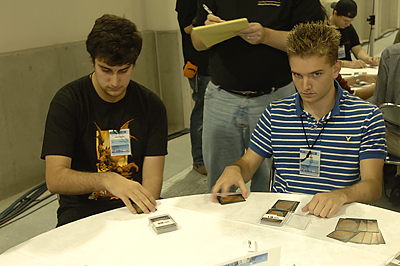 Meanwhile, Nick had his choice of Tendrils of Corruption or Lightning Axe as the first pick. Staying on target, Nick took the red card and passed the Tendrils to Marijin. Marijin was a fan of this, as he had taken a first pick Nightshade Assassin over Griffin Guide, Watcher Sliver, Grapeshot, and Arena. Clearly showing a preference for black, he loved seeing both Nick and André pass Tendrils of Corruption for picks two and three. What did André take over the Tendrils? The bombastic Verdant Embrace, thrusting him into green-black and giving Nick full rein to enact his red-blue plan. So far so good.

Geoffrey had taken Rift Bolt first out of a fairly weak pack, but was certainly happy to see Griffin Guide for his second pick. Red-white is a very reasonable archetype, and Guide and Bolt are fine ways to start it. Geoffrey's third-pick Temporal Isolation further cemented the plan. So far the color breakdown looked like this.

This was a great setup for Nick and André, who were completely avoiding each other. Can you see the crack in the structure? With André cherry-picking the best Black stuff, Marijin wouldn't be able to get into a mono-build. Marijin needed to pick a second color. The only color not being taken by the two players on the right was white. If the packs had enough depth, Marijin could take red or blue or green cards to go along with the black ones. If there weren't unusual multiples, than Marijin would be forced to dip his toe in white, and that's exactly what happened. His fourth pick was Temporal Isolation over a Skulking Knight, and his fifth was Benalish Calvary.

Meanwhile, Geoffrey got a nice fourth-pick Undying Rage and fifth-pick Cloudchaser Kestrel. After that, though, his quality dropped off dramatically. With a white drafter on his right and a Red drafter two to his right, the cards Geofrrey needed simply weren't available. Here are the first six picks of each player at the table:

The second pack had more of the same goodness for Nick and André. André had no Green drafter three to his left, and Nick had no blue drafter the same distance. André did lose out a bit on black when Marijin received some excellent black in Sudden Death, Phyrexian Totem, and a fourth-pick Liege of the Pit. After that, with Geoffrey drafting white on his immediate left, things dried up a little. It seemed everyone at the table was playing with white, probably from the busted first booster way back when. As such, Marijin hate-drafted a Stonewood Invocation that would probably have made it to André for his seventh pick. Nick was doing great with the dearth of blue players, adding Careful Consideration and Fledgling Mawcor to his deck early on. There was so little for Geoffrey to take in this round that he flirted with the idea of drafting green, although this was abandoned after he passed the Invocation. 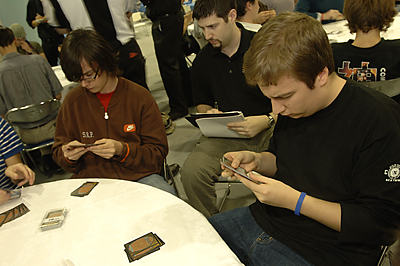 The final booster had more of the same. André and Nick continued to completely stay out of each other's way, leading to extremely strong decks for both. Marijin started with two Strangling Soot, giving another sorely needed Griffin Guide to Geoffrey. After that and a welcome sixth-pick Fortify, Geoffrey was consistently stuck with the dregs. Marijin's deck added another Temporal Isolation and an Amrou Scout. At this point his deck was basically made, so he started doing more hate-drafting, removing from the table a Grapeshot (sorry, Geoff) and a bizarre seventh-pick Errant Ephemeron.

With Nick the only blue drafter and André the only green drafter for miles, both of these players have ended up with extremely strong builds. Marijin's deck is also rock solid, with lots of Black removal and speedy white creatures. The only person on the line that ended with strict mediocrity was Geoffrey Siron. His red-white deck had some speed potential with Undying Rage and Griffin Guide, but his removal was sorely lacking. Geoffrey's going to need to use all his Pro Tour-winning skills to end on a positive note at this table.