Draft One: Reports From the Floor 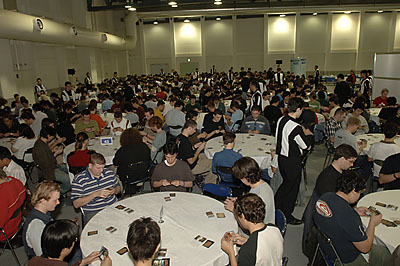 the first draft of Pro Tour-Kobe, we sent our crack team of reporters onto the floor to determine what the pros think of this intricate new format. Did the pros have a plan for Time Spiral draft? Did they believe in a best archetype or color combination? We watched the drafts of Osyp Lebodwitcz, Billy Moreno, Johan Sadeghpour, Rich Hoaen, Masashiro Kuroda, and Anton Jonsson, all at different tables, to see what ideas these respected pros brought to the table. From the results we can see that these players definitely have opinions on Time Spiral draft, but there's certainly no consensus amongst Magic's elite.

Osyp started with a booster entirely weak but for Serra Avenger and Soltari Priest. Clearly annoyed to take a double-white card and pass a double-white card, he nonetheless first-picked the 3/3 Angel. One of Osyp's most interesting picks came in the very next pack. A booster with Watcher Sliver and Icatian Crier offered adequate white, sandwiched between a touch of red and some black. Osyp strongly considered the Funeral Charm here but in the end took the 2/2 Blazing Blade Askari. Did Osyp have a preference for a white-red aggro deck? Possibly, but the red was being uncooperative at the table. 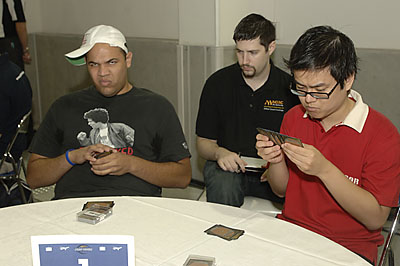 Osyp's picks for the remainder of the first pack were the best white card if possible, and after that either a black or red one. At the end of the first booster, Osyp was solidly in white, with two D'Avenant Healers, Celestial Crusader, a few red creatures, and a few black ones. Funeral Charm tabling at tenth pick was certainly a surprise, and it definitely gave Osyp a preference in the rest of the draft.

White was also the color of choice for Johan, who started with Duskrider Peregrine over Temporal Isolation and Stuffy Doll. But while Osyp was favoring aggressive White strategies, Johan was clearly going the control route. His preference was Evangelize over Twisted Abomination and Momentary Blink over Benalish Cavalry. This plan was well-rewarded when his second pack had the gift of the incredible Teferi's Moat. After making such pointed picks so early in the draft, one would think Johan's colors would be wide open. Unfortunately, he ended up flanked by a number of white and blue drafters. While his early picks were great with Castle Raptors, Chronosavant, and Celestial Crusader, the goodness dried up quickly after picks 5-7. This forced Johan into running some decidedly mediocre cards to fill out the deck, such as Chromatic Star and Drifter il-Dal. If Johan can draw his power cards and avoid the filler, he stands an excellent chance of sweeping his table.

Also strongly in favor of the white-blue archetype was Rich Hoaen. Rich's first pack contained Firemaw Kavu, considered one of the most powerful uncommons in the set. The Kavu didn't get so much as a glance as Rich took Errant Ephemeron as pick number one over the aforementioned Kavu and Witch Hunter. The white-blue plan proceeded apace with a Temporal Isolation and Pulmonic Sliver. Between the excellent flash aura and the Avenging Angel sliver, Rich was definitely in the right place to pick up white. A late Tendrils of Corruption indicated Black was available as well, but Rich stood fast with his blue/white plan. That dedication was rewarded in pack two, when the rare Draining Whelk entered the collection. This card is already powerful, but with the white/blue staple Momentary Blink, one can lock an opponent right out of the game. No Blink ever materialized as an option, but Witch Hunter, another Temporal Isolation, and a Looter il-Kor (over Fathom Seer) were fine additions nonetheless.

The final pack was Rich donating an amazing red deck to the player on his left. Avalanche Riders, Tribal Flames, and Jaya Ballard, Task Mage all got sent downstream. Rich rounded out his deck with a Crookclaw Transmuter, Spiketail Drakeling, and Careful Consideration, as well as defense in Jedit's Dragoons, Cancel, and Bewilder. It's difficult to say whether Rich could have drafted a better deck if he was more open to playing red but Rich clearly had a preference in this draft. This weekend we'll see if it's the right one.

Meanwhile, Osyp continued to straddle the fence on white-red or white-black. His decision was put off a bit when he was passed the incredible Sacred Mesa, made even more powerful by his Celestial Crusader. When Faceless Butcher appeared as an option, Osyp shrugged his shoulders and cemented himself into the black-white archetype. While an Undying Rage somehow managed to go tenth, Osyp's decision to go black was ultimately the correct one. White dried up in pack three, but the black was flowing like water. Osyp's second pick gave him the choice of Sudden Death, Plague Sliver, and Void. Osyp took the Sudden Death, which later joined Soul Collector, Tendrils of Corruption, and two Dark Withering. Osyp's final deck ended up quite powerful. With flexible removal, double Clockwork Hydra, and a Sacred Mesa to dominate the late game, Osyp's deck could easily be the best one at his table. 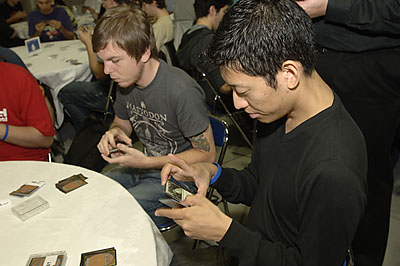 Kuroda sizes up his picks.

On the opposite end of the spectrum to all the control white players was Masashiro Kuroda. Kuroda showed a clear interest in red and black cards, immediately bringing them to the front of his booster in pack one to examine. Riftwing Cloudskate was not included in the debate between Lightning Axe, Dauthi Slayer, and Goblin Skycutter. After a bit of consideration, Kuroda went with the Lightning Axe. His next booster provided a great gift to his preferred archetype in Shadow Guildmage. Between Tendrils of Corruption, double Feebleness, and Ib Halfheart, Goblin Tactician, Kuroda was entrenched exactly where he wanted to be. Surprisingly, a Tromp the Domains showed up as a very late eighth pick, an incredible splash card in any deck. Kuroda was definitely in the right place, though. If he needed any other signal that red-black was the way to go, the Dauthi Slayer from the first pack came back to him ninth!

In pack two, Kuroda took a Premature Burial over Assassinate and Assault // Battery. Was passing the split card an indication Masashiro didn't want to go with any Green? There wasn't much consideration for the rest of pack two. Another Premature Burial and Assassinate were welcome additions. Masashiro's most interesting pick in the second booster was Liege of the Pit over Dark Withering. Having so far loaded up in the removal category, Masashiro needed a finisher to take advantage of his opponent's empty board. The third booster was more of the same. The double Gorgon Recluse played very well with Kuroda's Lightning Axe all the way back in pack one. At the end of the draft, Masashiro Kuroda had the red-black deck he was definitely gunning for. A potent collection of removal and creatures game him an excellent chance to sweep the table.

Anton Jonsson had a plan as well, although once again, it was far different from the other pros'. Anton was looking to draft anything that didn't include black or green. His first-pick Sulfurous Blast fit this scheme perfectly. However, his Black avoidance hope was abandoned soon after when Dark Withering and Phthisis came in sequence. Anton had the option of taking Looter il-Kor in the third pick over the Phthisis, but decided to stick with the red-black plan. After giving his neighbor a fourth-pick Looter, Anton was quickly able to write off blue as an option in the draft. The rest of the pack saw a lot of decent black, with a smattering of red to keep him invested in the original pick.

The second booster started off poorly for Anton. The first thirteen cards were extremely mediocre, but the timeshifted card was another matter entirely, the excellent Soul Collector. That would have been a fine pick, but for the incredible and bomb-a-licious Sengir Nosferatu. Deciding to take the 4/4 flying Vampire over the 3/4 flying Vampire, Anton's deck quickly solidified into a very heavy black build. The red remained the second color for the rest of the draft, although it was definitely second fiddle to the incredible black. One can see that this draft was defined by the third pick, of Phthisis over the Looter. After that decision, the rest of dominoes simply fell into place. 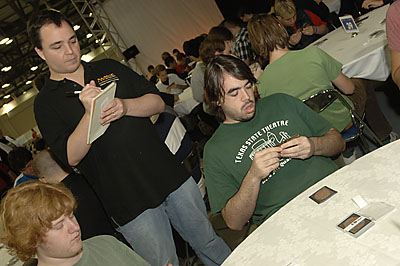 Billy Moreno drafts under the watchful eye of Brian David-Marshall.

Finally, there was Billy Moreno's draft. His table was by far the most pro-heavy of the initial drafters, with Christian Hüttenberger, Sam Gomersall, Jose Barbero, and Billy's PT LA finals opponent, Antoine Ruel. Billy's first pick was an easy one: everyone's favorite Blue Char, Psionic Blast. This was a great pick for Billy, not just for Psi Blast's power, but because blue seemed to be the least-drafted color at the table. Spiketail Drakeling and Sprite Noble were both welcome additions to the aggressive-seeming blue deck Billy was creating. His second color was a bit undecided, as Billy waffled between green and red when there wasn't a blue card to take. A fifth-pick Rift Bolt was a nice find, but that was definitely the most powerful red card Billy got.

Billy's blue inclusions continued in packs two and three with double Pirate Ship, Crookclaw Transmuter, and Wipe Away. The real gift to Billy was his thirty-second pick: Serrated Arrows. With the Arrows and two pingers, Billy's blue deck was well set up to take down a lot of opposing creatures. Billy's second color ended up being green for Nantuko Shaman and friends. He kept in a little red mana for the Rift Bolt and the kicker on his Thornscape Battlemage. Billy's deck ended up being very powerful, an impressive feat considering the caliber of his opponents at the table. If Billy can get his pingers online, or if he gets to re-use Serrated Arrows, there will be very few decks that can oppose him.