can be no question that Anton Jonsson of Sweden is one of the absolute best drafters in the world. Coming into this event he's made consecutive Top 8s at the last three individual draft Pro Tours, coming in third at Pro Tour-Amsterdam, fourth at San Diego, and then second at Pro Tour-Nagoya. Anton is also one of the elite players to have five Pro Tour Top 8s on his resume, four of which come from Limited events. Even more impressive is that Jonsson has managed that record while only attending seven Limited events so far! That's a staggering 57 percent rate of Top 8s per Limited event, which shows that this man knows what he's doing and why he's coming to London as one of the favorites to show up under the cameras on Sunday.

When the pods were announced for the start of Day 1, this is what his table looked like:

In his opening pack, Anton had to choose from Kodama's Might , Teller of Tales , Rend Spirit , and Pain Kami . Taking the Teller from this pack, in his next pack he took Thief of Hope over Sakura-Tribe Elder , Lure , Wicked Akuba , and Mystic Restraints . His third pick was Soratami Cloudskater over Indomitable Will . After that, however, the black dried up, giving him just a Cruel Deceiver to go with his Thief of Hope . And while the blue was certainly coming around in quantity, the quality was leaving something to be desired, as Anton was forced to settle for Hisoka's Defiance and then three copies of Callous Deceiver .

When he opened his Betrayers pack, his trademark shake of the head had begun by the time he was just over halfway through the pack and hadn't seen one card for his deck, but it stopped when he got to Patron of the Nezumi in the rare slot. The choice was a tough one, because his only black cards at this point were Thief of Hope and Cruel Deceiver , and there hadn't really been any shots at further black in the first pack. With that in mind, this first Betrayers pack also offered a Cunning Bandit , if he was willing to switch to red and try to deal with the awkward casting cost. Anton appeared to weigh both options pretty heavily but decided on the Patron. 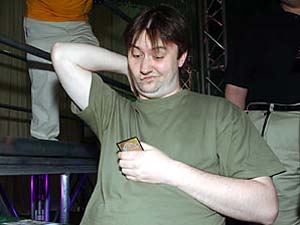 Anton's reputation as a top drafter is well-deserved.

His next pack seemed to mock him a bit, now offering a Torrent of Stone . Anton settled for Ninja of the Deep Hours with another shake of the head, and shook his head even more next pack when a second Cunning Bandit showed up. Likely too committed to switch at this point, the pack didn't really offer anything else playable in his deck, so he took the Bandit, but the red dried up from there.

Cut off from black in both directions but with even less red on the way, for the rest of the draft Anton struggled to find quality cards, able to flesh out his deck with filler but not finding many of the powerful options often available to this archetype. The resulting deck had several powerful cards and some potentially strong tricks if they came up in the right order, but it was hurting for quality removal and contained a potentially awkward mix of cards that could be quite poor if they came in the wrong order, even more so than for typical draft decks.

1 Patron of the Nezumi
22 Cards

1 Patron of the Nezumi
40 Cards

After the draft I sat down with Anton to get his thoughts on the draft and the format. When asked how he thought the draft had gone, he replied, "The deck's not very good. I was obviously heavily cut off in black, but I'm not sure what I could have done to switch." When I asked which choices were difficult, he immediately jumped to the first Betrayers pack.

"When I took the Teller of Tales it meant that I was passing Might, Pain Kami , and Rend Spirit to Antonino [De Rosa]. I figured that the only way he would take the Rend would be if he had opened a powerful black spell, since both Might and Pain Kami are stronger, and I would expect him to take one of those cards if he weren't already aiming to get black from his first pick, so as long as that didn't happen I would have a good shot at black in Betrayers if I wanted to go that way. Based on how little black came around from Betrayers however, I have to think that he did open something quite good in black pick one, then took the Rend pick two. Worse, I'm pretty sure the player to my right also ended up in black quite quickly, so there ended up being very little to go around."

Anton couldn't know it for sure at the time, but his analysis was dead-on. Antonino had opened and picked Befoul , which then caused him to take the Rend Spirit that Anton passed, over the other two arguably better cards. For less experienced players, it's a telling example of how great drafters are able to guess so well what's going on around them, even in a format like Booster Draft, where you don't get to see each opponent's picks. In fact, that lack of knowledge is exactly why it's so important to be able to determine what your neighbors are likely to be drafting, and what that means for your own draft. Though this particular draft didn't offer Anton many chances to fix his predicament, in the long run the more often you're able to identify these situations the more often you'll be able to do something about it.

Asking about the format in a more general sense, Anton offered an interesting observation:

"There are so many reasonable filler cards in this format that it's often not difficult to get to 22 or 23 acceptable cards. There will almost always be cards like Callous Deceiver to fill things out. But, there are several cards in this format that can win the game all on their own, if things work out just right for them. Since it's so likely that you'll be able to fill your deck in, with Saviors in the mix it's often okay to run a couple of those situational cards, on the off chance that things come together just right and you just win right there.

Lastly, I asked if any cards had risen in value for him as he'd become more experienced in the new format. He immediately smiled and said that for sure Shinen of Life's Roar had to be the big sleeper card of the format. "A lot of people don't seem to know that yet, but more and more are learning after they've played against it." He also added, with a smile, " Sokenzan Spellblade is also ridiculous, but I think there are fewer people that haven't figured that one out yet."

When asked what he thought of his chances, he said that he had several good cards, but that his deck wasn't deep enough. Because of that, he felt his performance would likely be determined by how often he was drawing out of the bottom of his deck's card pool. Though his deck didn't work out the way he might have liked, his experience with and understanding in the format showed clearly as he navigated his way through this difficult draft.