Saviors being relatively new to the format, there's been a lot of talk this event about all the players that tested online in countless drafts for hours on end day in and day out. Not Eugene Harvey. When I asked him about his online preparation for this Pro Tour he smiled almost embarrassedly and said that he hadn't done a single draft on Magic Online this time around. Instead he'd been getting his practice in person, but hadn't had the time to do as many drafts as he would have liked. 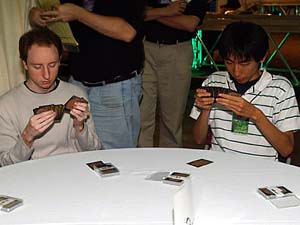 Eugene Harvey found himself next to Masashi Oiso in Pod 3.

But even when he's perhaps under prepared, there's always a plan for the one they call the Eugenius. Because he knew he wasn't going to be able to get as much practice in as he wanted, he made a conscious effort to focus on green and become an expert on the archetypes that used the color. Feeling that green was underappreciated by many pros, Eugene was able to get a lot more done in the time he has by becoming a specialist by just practicing drafts focused on that color. It's not an ideal strategy for someone with the time to test more extensively, but when time's limited it can be very effective. Eugene has so much talent that he's still going to be perfectly fine drafting other colors when needed, particularly since in those situations the presumption is that there are good enough cards coming to sway him from his preferred color.

"I'm definitely looking to draft green if given the chance, at pretty much any signal. I mean, if I get passed a pack with black removal or a Kodama's Might, I'm taking the Might."

In addition to aiming for green, Eugene was looking to avoid drafting black.

"Right now I think black tends to be over-drafted. I especially want to avoid ending up in black-red. Those decks so often look good on paper, but then they just don't seem to win when it's time to actually play them. Another thing about black is that not only does there seem to be more people drafting it, but it also really dries up in quality once you get to the third pack. Green on the other hand is great in Saviors and can really reward you."

When the players were called to the tables for the third draft, it was time to head to Pod 1 with the rest of the players currently at the top of the standings.

Players settled into chairs, announcements were made, and then it was officially time to draft. For his first pack Eugene was greeted by several mediocre cards accompanied by Soratami Rainmaker, Nezumi Cutthroat, and Kodama's Might. So far, so good. He scooped up the green card instantly, took a second look at the remaining cards, and quickly sent the pack off to his neighbor. When you watch Eugene play Magic, there's a nervous, intense energy to him, and it's no different when he's drafting. He rips through the cards at lightning pace, so quickly that it can be difficult to even follow what he's doing. His movements are rapid but deliberate. 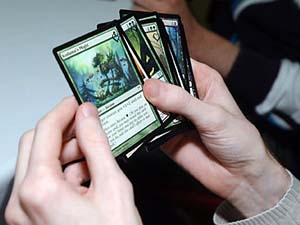 For the second pack there wasn't anything reasonable in green, so it was time to start contemplating color No. 2 (assuming more green came later). The best options were Rend Spirit, Kitsune Blademaster, and Gibbering Kami. While a lot of drafters prefer to avoid green-white (and probably would have jumped at the Rend Spirit), Eugene stayed true to course, skipping the black cards and taking the Blademaster. The next choice was Soratami Rainmaker or Kodama's Reach, but by "choice" I mean he noted the presence of the other card and then promptly put the green card onto his pile.

One of the more interesting picks of the draft came next, when he had to choose between Burr Grafter and Thief of Hope. Now, Burr Grafter is no slouch, but Thief of Hope is an amazing card, and its presence as a fourth pick suggested that black may not be as over-drafted for this position as Eugene normally expected. Further, Thief is outstanding in black-green. Eugene thought about this one longer than just about any other pick in the draft, but ended up taking the black card.

After that the black dried up completely, which didn't seem to bother Eugene in the least. From here out white and green picks flowed nicely, and it was clear from the depth of cards available that the chair was great for his green strategy. Here's the deck he ended up with:

1 Roar of Jukai 1 Kodama's Might 1 Charge Across the Araba 1 Inner Calm, Outer Strength

When I first sat down with him after deck building to talk about the draft, the first thing he said, before I'd even asked a question was that he didn't mind at all that he had ended up green-white. He was perfectly happy to go green-white if the cards broke that way, an archetype that many other pros have only discussed this weekend when listing the archetypes they are going out of their way to avoid. 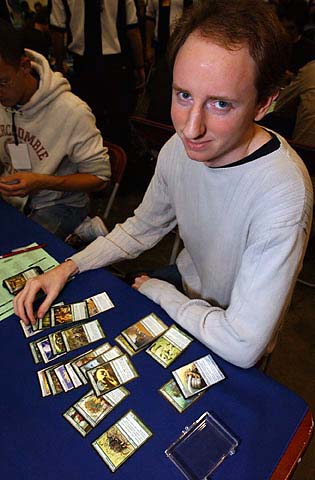 Harvey believed green would be undervalued at PT London.

"I'm actually happy with green-white when I end up with it. I'm not going to force it if the cards aren't there, but when they are the deck can be great. You've got great aggressive creatures and some very good tricks for finishing the game. The only thing with green-white is that you have to hope not to run into the really broken cards, because those can be more difficult to deal with for that color combination. Also, it can be tough getting through healer-type effects, so hopefully I won't be running into too many of those over the next three rounds."

Though Thief of Hope hadn't ended up in the deck, it was still an option for sideboarding.

"The deck was good enough that the Thief didn't make it into the main deck. My mana is a bit shaky as it is, but I can definitely see bringing it in against slower decks, where it should be great. Between the Petalmane Baku and Kodama's Reach it shouldn't be too hard getting it into play against a slower deck."

So how did he feel about the deck he ended up with?

"Overall I think the draft went pretty well. I like the deck, but definitely have to hope not to run into too many healers or ultra-powerful cards that I'm not able to deal with. Can it go 2-1? I think so, maybe even 3-0 I hope. 1-2 is a possibility, but not the dreaded 0-3. We're not even going to talk about that."