Gomersall loves to draft, and it shows. After getting voted in to this year's Invitational on the players ballot, Sam made headlines by constantly drafting on Magic Online even during his Invitational matches! In fact, Sam will admit that he often drafts as much as 12 times a day (or more) on average.

When he sat down to draft at the 2-1 pod, this was the table that greeted him:

That's pretty rough for table 11! And with that in mind, what better time to start your draft off with an absolute bomb? Sam's first pack was insanely deep, but I barely saw it all because he shot a Meloku the Clouded Mirror to his picks pile before he'd even seen the rest of the pack. And what a pack it was! The cards I saw included Befoul, Scuttling Death, Earthshaker, Kodama's Reach, Hearth Kami, Soratami Rainshaper, Kodama's Might, and possibly some other cards I didn't manage to see in the rush. 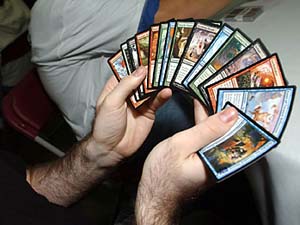 Sam's next pack offered Kodama's Reach, Honden of Night's Reach, or Burr Grafter, and since Sam had come in looking to draft green it was down to just Reach and Burr Grafter, and Burr Grafter wasn't winning that one, particularly with a Meloku waiting to be accelerated out. After that Sam's deck settled strongly into green, with Moss Kami, Time of Need, Orochi Sustainer, and Serpent Skin, with only Callous Deceiver from a decidedly mediocre pack showing up to increase his blue count.

Than something crazy happened. On pick 9 Sam got back his ridiculous pack from the opening pick back, and somehow when he fanned out the cards the Earthshaker was still in there looking up at him. With no red cards at all to that point, Sam still decided to go with Earthshaker and see what other red showed up, possibly with the idea of moving Meloku to a splash. The decision was all the easier because there wasn't much else to choose from anyway. When I talked to him about it after the draft, we both agreed that we'd never seen an Earthshaker table a draft, and when someone with experience like Sam says he hasn't seen something before, you know it's got to be rare.

From there red dried up immediately however, so Sam settled comfortably into a very solid green-blue. Then, at the fifth pick of Saviors, something even crazier happened. Looking up at Sam this time was Jiwari, the Earth Aflame, a card that had gone through four other drafters to get to him. Sam was clearly shocked, and thought quite hard about what his options were at this point, finally deciding to go ahead and take the dominating rare and figure things out from there. Strangely, as with the Earthshaker, the red again completely dried up, despite what clearly must have been a pretty wide swath of non-red drafters.

During the build phase Sam tried several builds to see if he could play one or both of the red cards, but in the end the deck looked too good to risk that kind of mana trouble.

After he was done building the deck and had turned in his decklist, I grabbed him for a few minutes to pick his brain on the draft and get his opinions on the format itself. For starters, I asked why he was so notorious as a drafter, and he responded that it had to be his love of cards that others just don't see in the same light. In particular he quickly pointed to Petalmane Baku. "I just love that card! I really love creatures with low casting costs, and I just never seem to get screwed when I have that guy in play. I know other people will play it, but they don't love it the way I do." 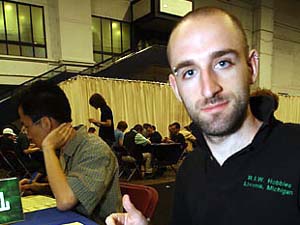 Sam could probably build draft decks in his sleep. Wait, there's no 'probably' about it.

When I asked what his preferences were coming into the event, he said that his primary goal was to aim for green. In order, his preference was to go for black-green, blue-white, red-green, blue-green, and possibly black-white if the cards dictated. He also came in wanting to avoid red unless it was paired specifically with green, as he just doesn't feel the color normally pairs well with black, white, or blue once Saviors is in the mix. He also feels that white is less powerful with only one Champions pack. In addition to losing several cards, Sam feels the color suffers in the new format because he thinks soulshift is much more important with Saviors, and white just doesn't have the great early drops to make that work well.

Lastly, when I asked which cards his opinion had changed on after so much practice in the new format, like Anton Jonsson he went straight to Shinen of Life's Roar. "The green Shinen is incredible, it's even better than Elder Pine of Jukai. I'd rather have the Elder Pine in this specific deck, but in most cases I think the Shinen is the better card, and it's often easier to pick up as well."

In addition, Sam pointed out that his opinion of Serpent Skin had gone up quite a bit in the new format. "I'm not 100 percent sure why, but the format's a bit slower, and you seem to have some more time for that kind of trick. Whenever I have it, it just seems to be better now." He also felt that Moonlit Strider and Torii Watchward were getting undervalued, noting that they do get played, but they should probably be getting rated higher nonetheless.

With a good start and an even better deck to continue with, you can bet Sam will be looking to add that elusive first Pro Tour Top 8 to his resume. On the way, it's likely he'll run into several players who already have Top 8s that would rather be playing someone else.